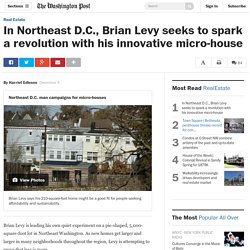 As new homes get larger and larger in many neighborhoods throughout the region, Levy is attempting to prove that less is more. Levy’s house is 11 feet wide and 22 feet long, with 210 square feet of interior space. The house has a galley kitchen and space to accommodate a small dinner party. It also has a full-size bed — although he can’t sleep overnight there because of a provision in District law. This Genius Project Would Create Tiny Homes For People Making Less Than $15,000 A Year. Another American city is embracing the idea of small homes that'll make a big difference. 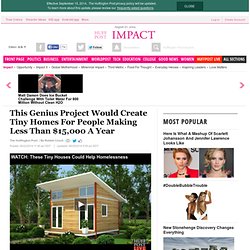 The city of Portland, Oregon, is nearing approval of construction for tiny home communities on public land in order to house homeless and low-income residents, the Oregonian reported. Josh Alpert, the city's director of strategic initiatives under Mayor Charlie Hales, said it's not so much a question of if, but rather, when the homes will be built in partnership with Multnomah County, according to the news source. The city will ask various public branches in the area -- including Portland Public Schools -- to provide surplus land for the homes.

"Before people can get back on their feet and take advantage of job training and drug and alcohol counseling, they need a place to live," Multnomah County Chairwoman Deborah Kafoury said Wednesday, according to the Oregonian. "This helps accomplish that. " "It's exciting. Portland hopes to have the first micro-community in place by February of next year.

Build a tiny house for $30,000. Jay Shafer, The Man With A Tiny House, Has Had To Expand. When Jay Shafer invited "Oprah Show" cameras into his house in 2007, viewers were blown away by the size of his place. 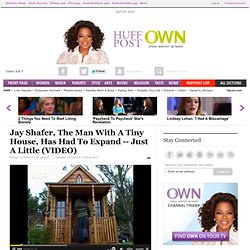 At just 96 square feet, Shafer's home was one of the tiniest most had ever seen. "[We're] stepping off the veranda into what I like to call the 'great room,'" Shafer said back then, gesturing to a cozy corner with two small chairs and, surprisingly, a micro-mini fireplace. As cameras panned the place, Shafer pointed out a big benefit to living in the tiny house. "This place has more storage per square foot than most houses would," he said. Shafer also showed off his kitchen and 3.5-foot sleeping space, explaining the appeal of his unconventional living arrangement. Seven years after first touring Shafer's tiny house, "Oprah: Where Are They Now? " "Things have changed a lot for me," Shafer says. The reason for the upgrade?

Shafer, his wife and two young children continue to live comfortably and efficiently, even though it may be hard for some to understand. Tiny Houses: A Big Idea to End Homelessness. Advocates tackling the nation's homeless problem are thinking small. 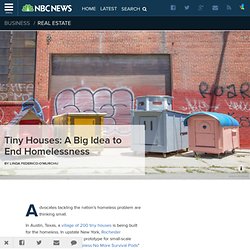 In Austin, Texas, a village of 200 tiny houses is being built for the homeless. In upstate New York, Rochester Greenovation has designed a prototype for small-scale individualized shelters. “Homeless No More Survival Pods” have been built in Utah, micro-pods in Florida, miniature homes in Wisconsin and mini mobile houses in California. The “Tiny House Movement,” once an architectural component to a downsized life, is now becoming something much bigger: an escape from chronic homelessness. “This is a plan that could revolutionize the housing movement in the United States,” declares Alan Graham, 58, a Texas activist who says his self-founded organization, Community First, has already lifted 100 homeless people off the streets. “The city of Austin loves us,” he says. Brian J Reynolds “I think this is a solution for now,” says Konkel.

This Adorable Home Isn't What You Think It Is (PHOTOS) Mobile Web - News - Oakland artist turns trash into homes for the homeless. By Matthew Artz Oakland Tribune Posted: 01/08/2014 09:03:02 AM PST8 Comments|Updated: 4 months ago OAKLAND -- Gregory Kloehn can turn just about anything into a home. 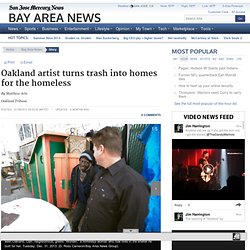 Learning to Live a Self-Sufficient Life - Homesteading and Livestock. In June 2004, my wife, Summer, and I arrived at the 40 vacant acres of grass and woods we had just purchased, nestled in the hills of southwest Wisconsin. 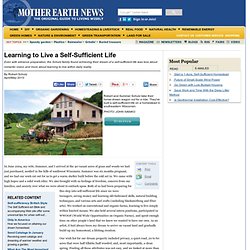 Summer was six months pregnant, and we had our work cut out for us to get a warm shelter built before the cold set in. We came with high hopes and a solid work ethic. We also brought with us feelings of freedom, concern from our families, and anxiety over what we were about to embark upon. Both of us had been preparing for this step into self-sufficient life since we were teenagers, saving money and learning old-fashioned skills, natural building techniques, and various arts and crafts (including blacksmithing and fiber arts). We worked on conventional and organic farms, learning to live simply within limited means.