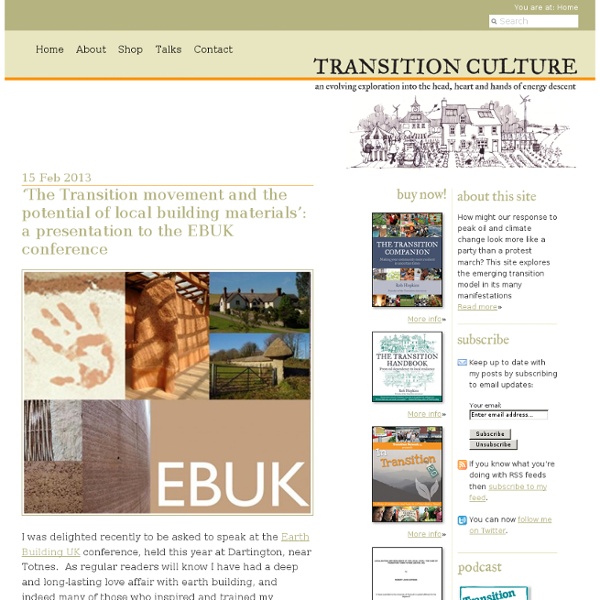 This Mexico City Building Eats Smog For Lunch There are plenty of architects these days who are doing their best to design buildings that are energy efficient and utilize green technology. And then there’s Allison Dring and Daniel Schwaag of the Berlin-based firm Elegant Embellishments. For Torre de Especialidades, a hospital with a new tower currently under construction in Mexico City, the duo has developed a tile called proSolve370e, which will cover the façade of the building. The tile’s shape and chemical coating will help neutralize the chemicals present in the city’s smog. Yes, that’s right, this building will literally eat pollution. Dring tells TakePart that Elegant Embellishments was formed in 2006 as a kind of architectural start-up to self-initiate projects that incorporate new and often invisible technologies.

Rob Hopkins of Transition Town Totnes and Transition Culture As Lester Brown recently noted on this site, the coming decline of oil will be ‘a seismic economic event’. So what do we do when we learn that the ’black gold’ will soon start running out? Do we grab a gun and head for the hills, or do we redouble our efforts to build strong, resilient communities and economies that are not dependent on fossil fuels? Rob Hopkins is at the forefront of the latter approach. decreixementacampadabcn (català, castellano) Can Decreix is a place to demonstrate and reflect around the topic of degrowth. In case you are nor familiar with the term: Degrowth is a word with many co-meanings. It is a call to scale down of the capacity to produce and consume, to scale down the importance of markets and monetary transactions in human relations, but also a proposal to live simply and critically evaluate the role of technology in human life, to keep on reconstructing the ‘joint project of society’ following the principles of deep and direct democracy. Started by activist scientists from Research & Degrowth (www.degrowth.org), Can Decreix is a centre for transformation (of fruits, vegetables, societies), for research, for testing frugal technologies, arts and permaculture.

Tomorrow's cities: How the Venus Project is redesigning the future 25 August 2013Last updated at 19:34 ET Is it possible to create a radically different society? One where material possessions are unnecessary, where buildings are created in factories, where mundane jobs are automated? Would you want to live in a city where the main aim of daily life is to improve personal knowledge, enjoy hobbies, or solve problems that could be common to all people in order to improve the standard of living for everyone? Transition scenario Transition scenarios are descriptions of future states which combine a future image with an account of the changes that would need to occur to reach that future. These two elements are often created in a two-step process where the future image is created first (envisioning) followed by an exploration of the alternative pathways available to reach the future goal (backcasting). Both these processes can use participatory techniques (Raskin et al., 2002[1]) where participants of varying backgrounds and interests are provided with an open and supportive group environment to discuss different contributing elements and actions. Transition scenarios are unique in type not only in terms of how they are created (process) but also their content.

Steady state economy A steady state economy is an economy of relatively stable size. It features stable population and stable consumption that remain at or below carrying capacity. The term typically refers to a national economy, but it can also be applied to the economic system of a city, a region, or the entire planet. Note that Robert Solow and Trevor Swan applied the term steady state a bit differently in their economic growth model.

Learn Skills, share tools, save money and make great new friends Streetbank is very like Justfortheloveofit. It lets you share things and skills with your neighbours and join in with community discussions. If you'd like to move your Justfortheloveofit account over to Streetbank, just enter your email address below and we'll pull your details across. Enter your email here The Ghosts of Shoppers Past: why assumptions matter 12 Mar 2013 The Ghosts of Shoppers Past: why assumptions matter Berry Pomeroy Castle near Totnes is famed for supposedly being one of the most haunted castles in Britain.

Sustainable development Sustainable development is an organizing principle for human life on a finite planet. It posits a desirable future state for human societies in which living conditions and resource-use meet human needs without undermining the sustainability of natural systems and the environment, so that future generations may also have their needs met. Sustainable development ties together concern for the carrying capacity of natural systems with the social and economic challenges faced by humanity. As early as the 1970s, 'sustainability' was employed to describe an economy "in equilibrium with basic ecological support systems."[2] Scientists in many fields have highlighted The Limits to Growth,[3][4] and economists have presented alternatives, for example a 'steady state economy',[5] to address concerns over the impacts of expanding human development on the planet.

The inspiring response of a place when told it probably won’t exist in 20 years This is a guest post from Filipa Pimentel, the Transition Network national hubs co-ordinator and she’s from Portugal. This is based on an email that she recently sent, and which I found moving and inspiring – so Filipa kindly agreed to share it with you… Hi all, I am going through a very intense process of change and I feel sometimes that I do not have all the time the space or opportunity to sit and share what I hold inside with you all, in a real space, not virtually. Should socialists support degrowth? by Don Fitz The question is not should we advocate reducing production within capitalist society but rather: How do we best relate to those struggles that are already occurring? Activists across the globe are challenging economic expansion which threatens the survival of humanity. It has never been more urgent to provide a vision of a new society that can pull these efforts together. Climate change is justifiably the focus of concern in the early 21st century.

This Zero-Energy Building Uses Algae for Power and Shade In a little over a month, a new German building will be the first in the world to have a "bioreactor facade" that can create energy, provide shade, and control light. The walls facing the sun are lined with giant glass panels that act as microalgae farms: fed with water and sunlight, the tiny plants grow until they're big enough to be harvested and sent to a nearby biogas plant to generate energy. The glass panels are also designed to capture the warmth of the sun to heat the building and provide hot water.