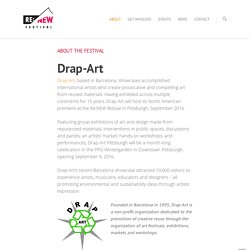 Having exhibited across multiple continents for 15 years, Drap-Art will host its North American premiere at the Re:NEW festival in Pittsburgh, September 2016. Turning Old Blue Jeans into Paper - Story. Recycling and reusing art - The Ferris State Torch. ArtPrize has begun in Grand Rapids, and the Fed Galleries at Kendall College of Art and Design (KCAD) is hosting a gallery focused on sustainability and reusing materials rather than discarding them. 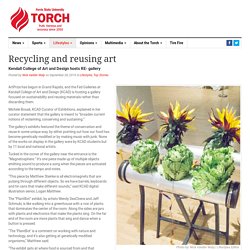 Michele Bosak, KCAD Curator of Exhibitions, explained in her curator statement that the gallery is meant to “broaden current notions of reclaiming, conserving and sustaining.” The gallery’s exhibits featured the theme of conservation and reuse in some unique way, by either pointing out how our food has become genetically modified or by making music with junk. None of the works on display in the gallery were by KCAD students but by 11 local and national artists. Food Waste Forum - Slow Food International. At this year’s Terra Madre Salone del Gusto, five actors involved in addressing the current food waste crisis came together to share their work and encourage change for the future. 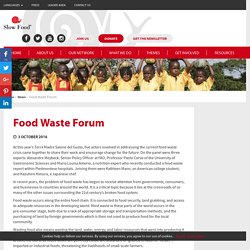 On the panel were three experts: Alexandre Meybeck, Senior Policy Officer at FAO, Professor Paolo Corvo of the University of Gastronomic Sciences and Maria Louisa Amerio, a nutrition expert who recently conducted a food waste report within Piedmontese hospitals. Joining them were Kathleen Mann, an American college student, and Kazuhiro Kimura, a Japanese chef. In recent years, the problem of food waste has begun to receive attention from governments, consumers, and businesses in countries around the world. It is a critical topic because it lies at the crossroads of so many of the other issues surrounding the 21st century’s broken food system. Food waste occurs along the entire food chain. Food waste goes against what Slow Food values, because it blatantly disregards the real value of our food. Waste not want not: Sweden to give tax breaks for repairs.

The Swedish government is introducing tax breaks on repairs to everything from bicycles to washing machines so it will no longer make sense to throw out old or broken items and buy new ones. 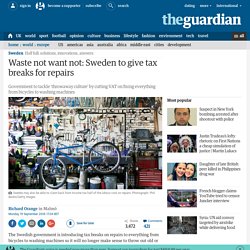 Sweden’s ruling Social Democrat and Green party coalition is set to submit proposals to parliament on Tuesday to slash the VAT rate on repairs to bicycles, clothes and shoes from 25% to 12%. It will also submit a proposal that would allow people to claim back from income tax half of the labour cost on repairs to appliances such as fridges, ovens, dishwashers and washing machines. “We believe that this could substantially lower the cost and so make it more rational economic behaviour to repair your goods,” said Per Bolund, Sweden’s minister for financial markets and consumer affairs and one of six Green party cabinet members. Plastic bag charge: Could fee be applied to other packaging? Image copyright Thinkstock A 5p charge for plastic bags in large stores was introduced in England a year ago next week, and research suggests it's had positive environmental effects with usage radically reduced. 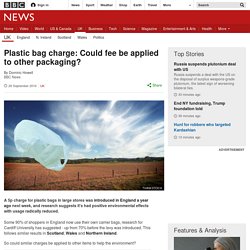 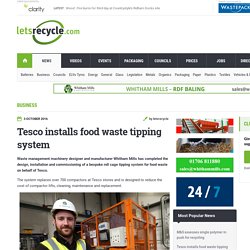 The system replaces over 700 compactors at Tesco stores and is designed to reduce the cost of compactor lifts, cleaning, maintenance and replacement. Whitham Mills managing director Ben Smart with a bespoke roll cage tipping system designed for Tesco This was installed after the retailer sought to incorporate segregated food waste into its reverse logistics operation – which sees food waste collected in-store before being bulked at one of 10 ‘recycling units’ run by the retailer. The Real Junk Food Project Opens UK's First Food Waste Supermarket. Cafes - The Real Junk Food Project. Festival of Thrift 2016, 17 & 18 Sept at Kirkleatham, Redcar. Walmart and Others Are Being Asked to Stop Selling as Much Meat. A group of 40 investors managing $1.25 trillion in assets have launched a campaign to encourage 16 global food companies to change the way they source protein for their products to help to reduce environmental and health risks. 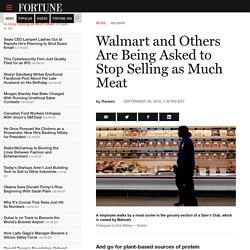 The investors, which include the fund arm of insurer Aviva and several Swedish state pension funds, wrote to the food companies on Sept. 23 urging them to respond to the “material” risks of industrial farming and to diversify into plant-based sources of protein. Among the companies targeted were Kraft Heinz, Nestle, Unilever, Tesco and Walmart, a statement by the Farm Animal Investment Risk & Return Initiative, which organized the investor group, said on Monday. “The world’s over reliance on factory farmed livestock to feed the growing global demand for protein is a recipe for a financial, social and environmental crisis,” said Jeremy Coller, founder of the FAIRR initiative and chief investment officer at private equity company Coller Capital. ‘How do we feed the world without destroying it?’ Sept. 28, 2016 - by Monica Watrous The question on the table right now is, ‘How do we feed the world without destroying it?’ 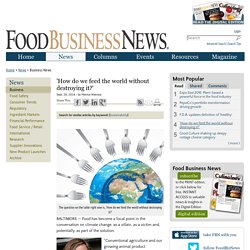 BALTIMORE — Food has become a focal point in the conversation on climate change, as a villain, as a victim and, potentially, as part of the solution. “Conventional agriculture and our growing animal product consumption and all of the food we waste are contributing to climate change in a negative way,” said Carlotta Mast, executive director of content and insights at New Hope Network. “But food can also be seen as part of the solution, by going back to more regenerative agricultural practices, by reducing food waste and by increasing plant-based food consumption and reducing animal product consumption.” Bottled water banned from Caloundra Music Festival. 35 Fair Trade & Ethical Clothing Brands Betting Against Fast Fashion. Based In | Hawaii, USAEthics | Handmade in small batches, donates excess fabric, gives backBest For | Responsibly-made dressesProduct Range | Women’s tops, dresses, rompers, playsuitsPrice Range | $$–$$$ No matter the season, YIREH has us dreaming of sunny summer days. 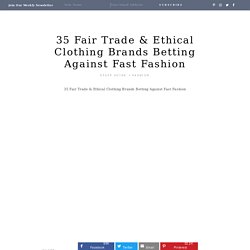 Their floral vintage-inspired dresses and rompers are handcrafted by artisans in Bali, where they are paid fair wages, receive one-month paid vacation, religious holidays off, sick leave, and medical insurance. Plus, YIREH donates 10% of their profits to International Justice Mission to help bring an end to human trafficking. What Does Sustainable Fashion Mean to Me? Last month, Shoreditch based Kit & Ace hosted a small group of us for the first in their speaker series ‘Real Talk: Conservationism and Sustainability in Design’. 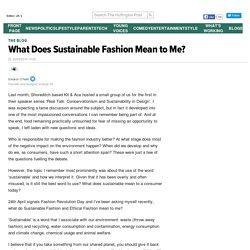 I was expecting a tame discussion around the subject, but in fact it developed into one of the most impassioned conversations I can remember being part of. And at the end, food remaining practically untouched for fear of missing an opportunity to speak, I left laden with new questions and ideas. Who is responsible for making the fashion industry better? At what stage does most of the negative impact on the environment happen? About Us – RE/DONE. Sustainable and Ethical Fashion blog UK study 34. ‘Denim is the most democratic product in fashion’ said Marco Lucietti, Global Marketing Director of ISKO, at the Copenhagen Fashion Summit this May.

And if we’re talking about its global style appeal, absolutely. Fashion Revolution. An Interview With Carry Somers, The Founder of Fashion Revolution. This week almost three years on from the devastating Rana Plaza complex collapse in Dhaka, Bangladesh, I managed to catch up with Carry Somers, to find out more about the Fashion Revolution that she has started and why she and many others are resolute in calling for change in the fashion industry. Why did you decide to start Fashion Revolution and why do you think it is so important? In the aftermath of the Rana Plaza collapse, everywhere I looked, there were newspaper articles calling for a more ethical fashion industry. Band uniforms get second life thanks to upcycle project. New sustainability plans focus on waste diversion. Are Sustainability And Transformation Plans The New Black? Dispatches from DH and NHS England proclaim that Sustainability and Transformation Plans (STPs) will reshape primary care and other services in London and across the country.

The 44 footprint areas across England are working up five year plans for their STPs by October. They have been described by NHS England as adopting: “...a new approach to help ensure that health and care services are built around the needs of local populations. To do this, every health and care system in England will produce a multi-year STP showing how local services will evolve and become sustainable over the next five years - ultimately delivering the Five Year Forward View vision of better health, better patient care and improved NHS efficiency.”. Enzyme soup: is this the future of recycling? BPI director dismisses talk of plastics recycling ‘crisis’ - letsrecycle.com. A senior plastics recycling industry executive has downplayed suggestions that reprocessors are under pressure due to the impact of falling oil prices on the price of virgin polymers.

Mike Baxter, external affairs director at plastic film recycler and manufacturer BPI Recycling Products, was responding to suggestions that UK plastics recyclers are ‘in crisis’ due to falling oil prices pushing down the price of virgin polymers – and making recycled polymers less attractive to manufacturers. Mike Baxter, director of external affairs, BPI Recycled Products, at last week’s Recoup Conference Mr Baxter was speaking at the Recoup annual conference and AGM in Peterborough last week (29 September), in a session on the challenges and opportunities faced by the plastics recycling sector. Oil price In early 2015 – oil prices fell from more than $100 per barrel to their lowest levels since 2009 and have remained at close to $50 per barrel ever since.

How Cotton Recovery is Changing the Game for Sustainable Fashion. Upcycling Goes High Fashion. What was once considered merely a new way to recycle has turned into a movement. Innovative, sustainable companies like Looptworks, Rewilder, and Bureo are making high-quality, trendy and desirable products using wasted materials, bringing us ever closer to a circular economy. Rosario Dawson on Co-Retailing and the Future of Ethical Fashion. Sharewear Innovating Sustainable Fashion.

Ethical Fashion: 10 Designers That Create Genuinely Amazing Clothes. Five designers revolutionising sustainable fashion. The boundless information made available by the internet has resulted in a new generation of inquisitive consumers, no longer content to buy into brands without first doing their research. As discussions surrounding sustainability continue, the fashion industry has begun to consider its own eco footprint and source sustainable alternatives to man-made fabrics.

Designers such as Vivienne Westwood have been vocal activists in the past – in the last two months alone Westwood released a fashion film detailing corporate exploitation of natural resources as well as attending and speaking at the recent Parley for the Oceans summit. As our friends at AnOthermag.com have pointed out – green is the new black.