London Design Biennale 2016. VRPolis, Diving into the Future With thousands of sensors that monitor things such as air pollution, noise and temperature, the smart city of Santander uses technology to improve urban life and the environment. 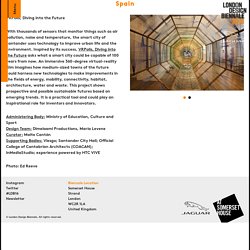 Inspired by its success, VRPolis, Diving into the Future asks what a smart city could be capable of 100 years from now. An immersive 360-degree virtual-reality film imagines how medium-sized towns of the future could harness new technologies to make improvements in the fields of energy, mobility, connectivity, habitat, architecture, water and waste. This project shows prospective and possible sustainable futures based on emerging trends. It is a practical tool and could play an inspirational role for inventors and innovators. Photo: Ed Reeve. Scandinavian Scientists Develop Textile That Repairs Its Own Rips, Tears. No need to throw away an old raincoat because a tiny rip or hole. 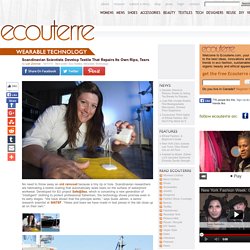 Scandinavian researchers are fabricating a textile coating that automatically seals tears on the surface of waterproof workwear. Developed for EU project Safe@Sea, which is conceiving a new generation of “intelligent” clothing to protect professional fishermen, the technology shows promise even in its early stages. “We have shown that the principle works,” says Susie Jahren, a senior research scientist at SINTEF. “Holes and tears we have made in test pieces in the lab close up all on their own.”

Modern rainwear typically comprises a protective layer of plastic polyurethane, which is applied in liquid form to the fabric surface and allowed to harden. Although scientists in other parts of the world have created self-repairing plastics that protect metals from corrosion, particularly in the automotive industry, a textile that heals itself is still a novel idea. . + Press Release. Technology is Key to Driving a More Sustainable Fashion Industry. Photo by Amberjack It’s a refrain we’ve heard repeated so many times before: In a world where networks are no longer constrained by borders and communication is practically instantaneous, designers are struggling to keep pace with a speed of fashion best described as “brand new today, discount rack tomorrow.” 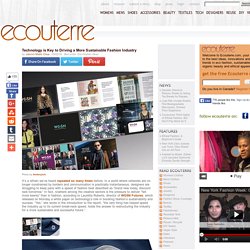 In fact, nowhere among the creative sectors is the pressure to deliver “felt more keenly” than in fashion, according to Lauretta Roberts, director of WGSN Futures, which released on Monday a white paper on technology’s role in boosting fashion’s sustainability and success. “Yes,” she wrote in the introduction to the report, “the very thing has helped speed the industry up to its current break-neck speed, holds the answer to restructuring the industry for a more sustainable and successful future.” Nike introduced its waterless “ColorDry” technology in 2014. We can attribute this uptick in awareness to technology, as well, notes the WGSN report. . + The Vision 2030 + WGSN Futures. How can technology advance sustainability in fashion? - live chat. 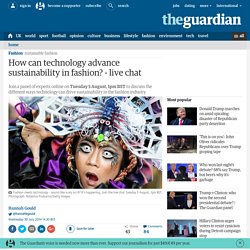 Today, we can engineer textiles to the point of being accused of "technological doping" and banned for use in competitive swimming, 3D printed garments are on the Parisian catwalk, and a Dutch artist has produced jewellery that can collect Beijing's pollution. Wearable tech company Fundawear claims to be pioneering the future of foreplay, and has made it possible to wirelessly transfer physical touch using clever pants and a smartphone. While Indian start-up Ducere Technologies, has revealed internet-connected shoes that use small vibrations to guide their wearer.

Technology is also helping fashion become more transparent. Can tech give the fashion industry a sustainability makeover? - live chat. Technology is revolutionising the way we use and relate to clothes. 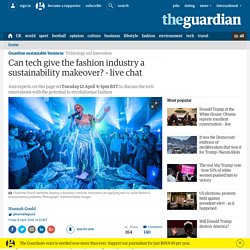 Last year, Google and Levi’s announced they were partnering on Project Jacquard to develop a fabric that can send commands to your smartphone via gestures like tapping or swiping. Ralph Lauren already offers a t shirt for a cool $295 (£210) that sends workout data to an iPhone, and Lady Gaga has brought 3D printing to the red carpet. But beyond the super hi-tech, others are working on merging technology and fashion to address environmental concerns.

Behind the catwalk supermodels and glossy magazine covers lies a seriously resource-intensive industry with heavy impacts. The fashion industry has been linked to pollution of streams and rivers with hazardous chemicals leaked from factories and is a contributor to bulging landfills. Some companies are already confronting these problems. Other companies are turning their attention to advancing eco-friendly dye technology. Join the discussion Panel. Shell #makethefuture.