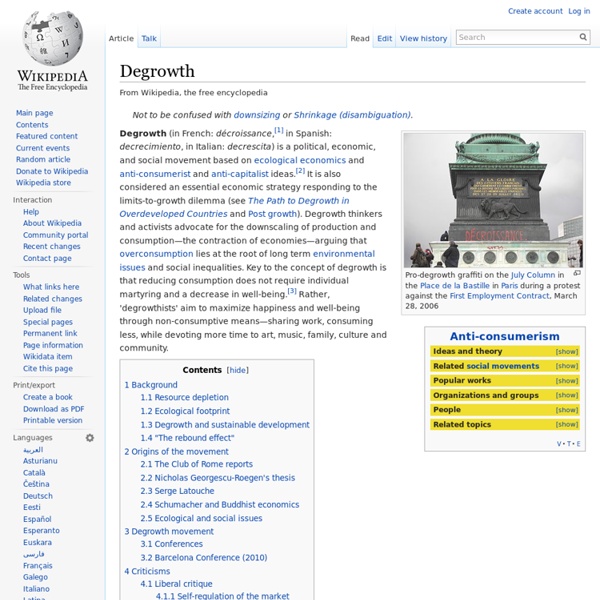 Degrowth (in French: décroissance,[1] in Spanish: decrecimiento, in Italian: decrescita) is a political, economic, and social movement based on ecological economics and anti-consumerist and anti-capitalist ideas.[2] It is also considered an essential economic strategy responding to the limits-to-growth dilemma (see The Path to Degrowth in Overdeveloped Countries and Post growth). Degrowth thinkers and activists advocate for the downscaling of production and consumption—the contraction of economies—arguing that overconsumption lies at the root of long term environmental issues and social inequalities. Key to the concept of degrowth is that reducing consumption does not require individual martyring and a decrease in well-being.[3] Rather, 'degrowthists' aim to maximize happiness and well-being through non-consumptive means—sharing work, consuming less, while devoting more time to art, music, family, culture and community. Background[edit] Resource depletion[edit] [edit] Serge Latouche[edit]

Richard G. Wilkinson Richard Gerald Wilkinson (born 1943) is a British social epidemiologist, author and advocate. He is Professor Emeritus of Social Epidemiology at the University of Nottingham, having retired in 2008. He is also Honorary Professor of Epidemiology and Public Health at University College London[1] and Visiting Professor at University of York. He is best known for his book with Kate Pickett The Spirit Level, first published in 2009, which claims that societies with more equal distribution of incomes have better health, fewer social problems such as violence, drug abuse, teenage births, mental illness, obesity, and others, and are more cohesive than ones in which the gap between the rich and poor is greater. Background[edit] Career[edit] Wilkinson's first book, Poverty and Progress was published by Methuen in 1973. On 16 December 1976, his article entitled 'Dear David Ennals'[5] was published in New Society; at that time, David Ennals was Secretary of State for Social Services. Books[edit]

Andy Burgess Wood Sculptor | Wood Sculptor Two great new anthropology classes | The Do It Yourself Scholar MMW1 Prehistory and the Birth of Civilization (feed), Tara Carter, UC San Diego. UCSD is presenting three different versions of this course, but Carter’s is my hands-down favorite. She relates the story of hominid evolution and the birth of social organization with infectious enthusiasm. Models of Cultural Evolution (feed), Robert Boyd, UCLA. He presents lots of interesting examples, including the different physiological responses of two groups of men to the experience being insulted. A 2007 syllabus of the course is here. Naomi Klein: Green groups may be more damaging than climate change deniers Canadian author Naomi Klein is so well known for her blade-sharp commentary that it’s easy to forget that she is, above all, a first-rate reporter. I got a glimpse into her priorities as I was working on this interview. Klein told me she was worried that some of the things she had said would make it hard for her to land an interview with a president of the one of the Big Green groups (read below and you’ll see why). She was more interested in nabbing the story than being the story; her reporting trumped any opinion-making. Such focus is a hallmark of Klein’s career. Klein’s first book, No Logo, investigated how brand names manipulate public desires while exploiting the people who make their products. Klein’s books and articles have sought to articulate a counternarrative to the march of corporate globalization and government austerity. First, though, she has to finish the reporting. You know, The Shock Doctrine, my last book, ends with climate change. It was go along or get along.

Aluna the Movie | Homepage cities@manchester | University of Manchester Introduction—“Animism” Anselm Franke For the Summer 2012 issue of e-flux journal we are very pleased to present a special “Animism” issue guest-edited by Anselm Franke, curator of the exhibition by the same name. Even if you missed Animism on tour in Europe since it began at Extra City and MUHKA in Antwerp in 2010, you have probably learned of its encompassing mobilization of the systems of inclusion and exclusion defining “science” and “culture.” The various stages of the exhibition have shown the discourse of animism to be a crucial skeleton key for releasing the deadlocks formed by the repressed religious, teleological, and colonial foundations of modernity—the hysteria within its narrative that continues to shape the exhibition formats and sensibilities we are tethered to. The fifth iteration of Animism is now on view at e-flux in New York until July 28. —Julieta Aranda, Brian Kuan Wood, Anton Vidokle A ghost is haunting modernity—the ghost of animism. © 2012 e-flux and the author

Lewis Mumford Lewis Mumford, KBE (October 19, 1895 – January 26, 1990) was an American historian, sociologist, philosopher of technology, and literary critic. Particularly noted for his study of cities and urban architecture, he had a broad career as a writer. Mumford was influenced by the work of Scottish theorist Sir Patrick Geddes and worked closely with his associate the British sociologist Victor Branford. Life[edit] Mumford was born in Flushing, Queens, New York, and graduated from Stuyvesant High School in 1912.[2] He studied at the City College of New York and The New School for Social Research, but became ill with tuberculosis and never finished his degree. Mumford's earliest books in the field of literary criticism have had a lasting impact on contemporary American literary criticism. In his early writings on urban life, Mumford was optimistic about human abilities and wrote that the human race would use electricity and mass communication to build a better world for all humankind.

The Gnostic Religion: Amazon.co.uk: Hans Jonas Book Description Publication Date: 16 Jan 2001 The Message of the Alien God and the Beginnings of Christianity Frequently Bought Together Customers Who Bought This Item Also Bought Sell a Digital Version of This Book in the Kindle Store If you are a publisher or author and hold the digital rights to a book, you can sell a digital version of it in our Kindle Store. What Other Items Do Customers Buy After Viewing This Item? 4.0 out of 5 stars Most Helpful Customer Reviews 10 of 11 people found the following review helpful Format:Paperback "...all investigations of detail over the last half century have proved divergent rather than convergent, and leave us with a portrait of Gnosticism in which the absence of a unifying character seems to be the salient feature" - Hans Jonas, Preface, 1958 No modern writer that I am aware of has brought life to Gnosticism as Jonas has. Jonas provides a broad sweep of the conditions at the time Gnosticism developed at the beginning of the Christian era.