What Is "Sustainable Development"?

5 Decades of Debate on Sustainability. 5 Reasons Mobile Is the Future of Sustainable Development. Social media and technology hold a unique position when it comes to shaping sustainable solutions for the future or our planet. 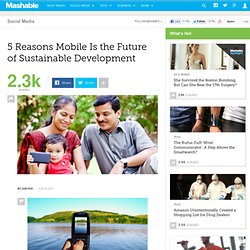 Mobile phones are even replacing paper money, helping to provide a check on authority and improving rural health standards. This week, government and thought leaders are convening in Rio de Janeiro to discuss the future of sustainable development. Mobile phones are at the heart of many of these solutions. 1. “Mobile phones in the health space feels like the Internet and ecommerce in 1994 and 1995,” says Paul Ellingstad, HP’s director of global heath. 2. 3. 4. 5. Brundtland Report 1987.

Can we live inside the doughnut? Why the world needs planetary and social boundaries. This blog summaries a new Discussion Paper published by Oxfam. 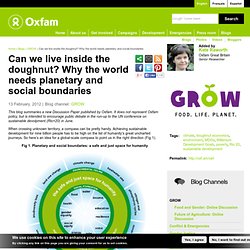 It does not represent Oxfam policy, but is intended to encourage public debate in the run-up to the UN conference on sustainable devolpment (Rio+20) in June. When crossing unknown territory, a compass can be pretty handy. Achieving sustainable development for nine billion people has to be high on the list of humanity’s great uncharted journeys. So here’s an idea for a global-scale compass to point us in the right direction (Fig 1). Fig 1. Source: Oxfam, inspired by Rockström et al (2009) What’s going on here? Putting excessive stress on these critical processes could lead to tipping points of abrupt and irreversible environmental change, so Rockström et al proposed a set of boundaries for avoiding those danger zones.

That’s a compelling approach to environmental sustainability, but humanity is glaringly absent from the picture. So how about combining planetary boundaries together with the concept of social boundaries? 1. 2. IBON on SDGs: We need alternative development vision after 2015. Paul Quintos of IBON International speaks at a Rio+20 side event. 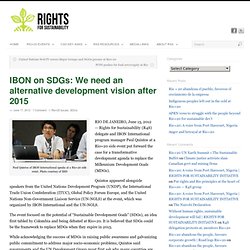 The event focused on the potential of “Sustainable Development Goals” (SDGs), an idea first tabled by Colombia and being debated at Rio+20. It is believed that SDGs could be the framework to replace MDGs when they expire in 2015. Noosphere 1922. Q&A: NGOs Must Play Key Role in Rio+20 Summit on Sustainable Development.

UNITED NATIONS, Aug 26, 2011 (IPS) - As the United Nations readies for a major international conference on sustainable development next June in Brazil, non-governmental organisations (NGOs) are preparing to play a key role in the run-up to the summit meeting and are preparing a plan of action to be adopted by world leaders. The Rio+20 conference will take place 20 years after the historic Earth Summit in Brazil in June 1992. Asked about the importance of NGO contributions, Michael G. Renner, senior researcher at the Worldwatch Institute told IPS, "I think the answer is still outstanding. Safe and Just Space for Humanity. The Road to Rio. What is Sustainable Development Definition. What is Sustainable Development? What to Read – A “Rio+20” anthology. 29/05/2012 at 11:21 am The 1992 Rio summit on “Sustainable Development” was a seminal event: Inspired by the Brundtland report, world leaders recognised that – in a world of finite resources – economic development had to go hand-in-hand with social progress and protecting the environment. 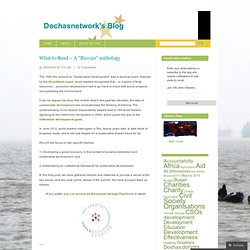 It can be argued (as does this article) that in the past two decades, the idea of sustainable development has revolutionised the thinking of millions. The understanding of our shared responsibility helped lead to 189 world leaders agreeing to the millennium declaration in 2000, which paved the way to the millennium development goals. In June 2012, world leaders meet again in Rio, twenty years later, to take stock of progress made, and to set new targets for a sustainable shared future for all.

Rio+20 will focus on two specific themes: World Bank on What is Sus.Dev? There are many definitions of sustainable development, including this landmark one which first appeared in 1987: 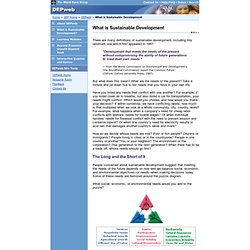