Making strides to improve maternal health in Sierra Leone. By Harriet Mason Sierra Leone has the highest maternal mortality ratio in the world, making it one of the most dangerous places to give birth. 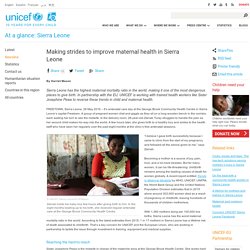 In partnership with the EU, UNICEF is working with trained health workers like Sister Josephine Pewa to reverse these trends in child and maternal health. FREETOWN, Sierra Leone, 26 May 2016 – It’s antenatal care day at the George Brook Community Health Centre in Sierra Leone’s capital Freetown. Nigerian immigrant dreams of finding cures for infectious diseases - May. 25, 2016.

The 25-year old studied ecology and evolutionary biology as an undergraduate at Yale, then earned his master's in biochemistry from the University of Cambridge. 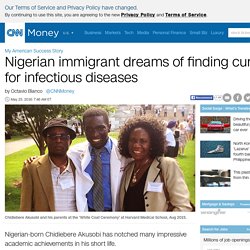 Now he's three years into a joint PhD/MD program researching cures for infectious diseases at Harvard and MIT. But if you ask him, he'll tell you that the biggest academic hurdle he ever had to overcome was in the fifth grade. That's when Akusobi, who had moved from Nigeria to the impoverished New York City neighborhood of the South Bronx when he was two years old, was accepted into the rigorous New York City Prep for Prep program. The program is an educational boot camp that selects roughly 225 promising students a year from the poorest New York City neighborhoods and grooms them for scholarships to attend the city's top private schools.

Related: My American Dream - Fighting for immigrant rights in the Deep South "I remember July 4th, 2001, everyone was outside and there were fireworks. But his true passion was medicine. Universal Health, Universal Rights. Good health is the mainstay of a good life. 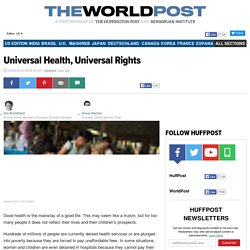 This may seem like a truism, but for too many people it does not reflect their lives and their children’s prospects. Hundreds of millions of people are currently denied health services or are plunged into poverty because they are forced to pay unaffordable fees. In some situations, women and children are even detained in hospitals because they cannot pay their medical bills. World Health Organization Recommends New Treatment for Drug-Resistant Tubercu...

Rep. Johnson: How to End the Stigma of Mental-Health Disorders. Guy Winch: Why we all need to practice emotional first aid. Why Finnish babies sleep in cardboard boxes. Image copyright Milla Kontkanen. 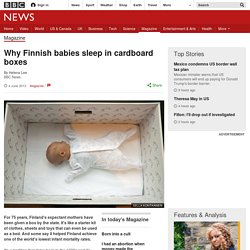 U.S. Infant Mortality: a Case Study in Health Care Disparities. The U.S. has been considered a leader in many things – industry, innovation and health care technology. 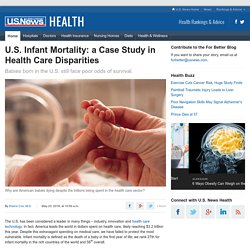 In fact, America leads the world in dollars spent on health care, likely reaching $3.2 trillion this year. Despite this extravagant spending on medical care, we have failed to protect the most vulnerable. Infant mortality is defined as the death of a baby in the first year of life; we rank 27th for infant mortality in the rich countries of the world and 56th overall. Mental Health Awareness Week: Why relationships are important to your wellbeing. Whether your circle of friends grows every weekend or has shrunk down to a handful trusted confidantes, it is undeniable that we are all social creatures who seek the comfort and support of others from time to time. 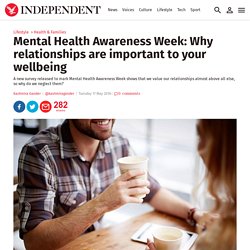 But as with many aspects of life, from diet to exercise, we don't always pay enough attention to what we know will help our wellbeing – and relationships are no different. The neglect our social lives suffer is highlighted by new research released by the Mental Health Foundation to mark Mental Health Awareness Week. It shows that more people regard maintaining healthy relationships as the most important factor to their wellbeing than those who cited healthily, exercising or avoiding negative habits including smoking combined.

Nevertheless, 46 per cent of the 2,000 adults in the UK who took part in the survey also admitted that they regret not investing more time in their relationships – a figure which hits 50 per cent among men. Mental Health Awareness: Facts and figures. Vaccination greatly reduces disease, disability, death and inequity worldwide. The healthiest countries in the world. World Health Day is April 7, and people around the globe are turning their attention to health issues. 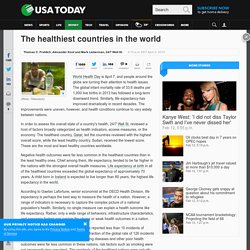 The global infant mortality rate of 33.6 deaths per 1,000 live births in 2013 has followed a long-term downward trend. Similarly, life expectancy has improved dramatically in recent decades. The improvements were uneven, however, and health conditions continue to vary widely between nations. In order to assess the overall state of a country's health, 24/7 Wall St. reviewed a host of factors broadly categorized as health indicators, access measures, or the economy. The healthiest country, Qatar, led the countries reviewed with the highest overall score, while the least healthy country, Sudan, received the lowest score. Negative health outcomes were far less common in the healthiest countries than in the least healthy ones. Global Goal 3: Good health and well-being.

Ensuring healthy living and promoting well-being sounds a lot like a promise people make to themselves on January 1. 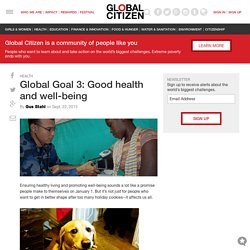 But it’s not just for people who want to get in better shape after too many holiday cookies--it affects us all. via GIPHY Global Goal 3 focuses on all aspects of health in the world. This includes increasing life expectancy, reducing infant mortality rates and ending epidemics such as AIDs, hepatitis and other transmittable diseases. And that’s just the beginning. . - Reduce maternal mortality rates to less than 70 per 100,00 live births by 2030. - Halve the number of global deaths and injuries from traffic accidents by 2020. - Ensure universal access to sexual and reproductive health services and family planning by 2030. - Provide access to universal health care services and essential medicines and vaccines. - Significantly reduce deaths and illness related to hazardous chemical exposure, water and soil contamination, and pollution.