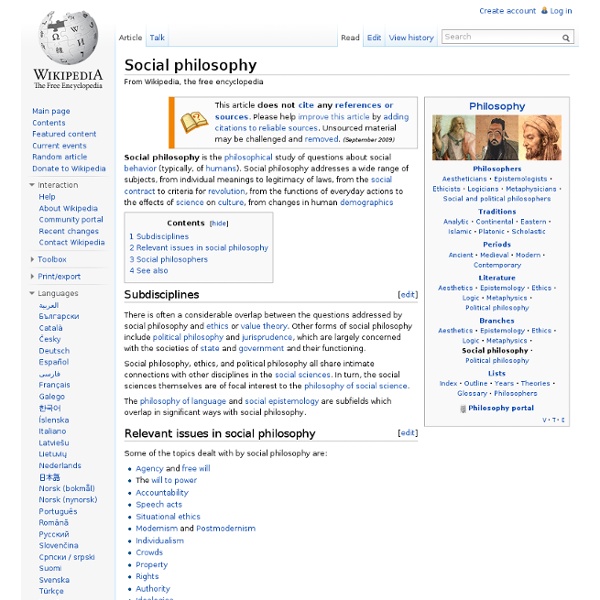 Philosophy of science Philosophy of science is a branch of philosophy concerned with the foundations, methods, and implications of science. The central questions concern what counts as science, the reliability of scientific theories, and the purpose of science. This discipline overlaps with metaphysics, ontology and epistemology, for example, when it explores the relationship between science and truth. While the relevant history of philosophy dates back at least to Aristotle, philosophy of science emerged as a distinct discipline only in the middle of the 20th century in the wake of logical positivism, a movement that aimed to formulate criteria to ensure all philosophical statements' meaningfulness and objectively assess them. Today, some thinkers seek to ground science in axiomatic assumptions such as the uniformity of nature. Introduction[edit] Defining science[edit] Karl Popper c. 1980s Distinguishing between science and non-science is referred to as the demarcation problem. Scientific explanation[edit]

Philosophy of education The Philosophy of education examines the aims, forms, methods, and results of acquiring knowledge as both a process and a field of study.[1] As a field of applied philosophy, it is influenced both by developments within philosophy proper, especially questions of ethics and epistemology, and by concerns arising from instructional practice.[2] Philosophical treatments of education date at least as far back as Socrates, but the field of inquiry only began to be recognized as a formal subdiscipline in the nineteenth century.[3] As an academic subject, it is often taught within a department or college of education, rather than within a philosophy department.[4][5] Though the field often seems to lack the cohesion of other areas of philosophy, it is generally, and perhaps therefore, more open to new approaches.[6] Educational philosophies[edit] Movements[edit] Classical education[edit] Humanistic education[edit] Contemplative education[edit] Critical pedagogy[edit] Democratic education[edit]

Capitalism Is the Enemy of Democracy The most significant accomplishment for Occupy Wall Street (OWS) to date is that the Occupiers have managed to poke a hole in the legitimacy of neoliberal capitalism and its central claim that unregulated markets provide opportunity and freedom. The Occupiers have accomplished this feat in a surprising way, peacefully, with home-made signs, signs that say things like, "If I had a lobbyist, I wouldn't need this sign." OWS has punctured the neoliberal façade simply by having the audacity to gather in public, in bold defiance of the police and to bear witness, by their solidarity and cooperation, to the idea that the Washington Consensus has long denied - that a different world is possible. Phil Rockstroh puts it this way: "the walls of the neoliberal prison are cracking ... At the core of this neoliberal ideology is a simple assertion - economic exchanges promote freedom because they are voluntary and, thus, they only occur if both parties believe they will benefit. As Richard D.

Metaphilosophy Relationship to philosophy[edit] Some philosophers consider metaphilosophy to be a subject apart from philosophy, above or beyond it,[4] while others object to that idea.[5] Timothy Williamson argues that the philosophy of philosophy is "automatically part of philosophy," as is the philosophy of anything else.[6] Nicholas Bunnin and Jiyuan Yu write that the separation of first- from second-order study has lost popularity as philosophers find it hard to observe the distinction.[8] As evidenced by these contrasting opinions, debate remains as to whether the evaluation of the nature of philosophy is 'second order philosophy' or simply 'plain philosophy'. Many philosophers have expressed doubts over the value of metaphilosophy.[9] Among them is Gilbert Ryle : "preoccupation with questions about methods tends to distract us from prosecuting the methods themselves. We run as a rule, worse, not better, if we think a lot about our feet. Terminology[edit] "When we ask, "What is philosophy?" C.

Continental philosophy It is difficult to identify non-trivial claims that would be common to all the preceding philosophical movements. The term "continental philosophy", like "analytic philosophy", lacks clear definition and may mark merely a family resemblance across disparate philosophical views. Simon Glendinning has suggested that the term was originally more pejorative than descriptive, functioning as a label for types of western philosophy rejected or disliked by analytic philosophers.[4] Babette Babich emphasizes the political basis of the distinction, still an issue when it comes to appointments and book contracts.[5] Nonetheless, Michael E. Rosen has ventured to identify common themes that typically characterize continental philosophy.[6] First, continental philosophers generally reject scientism, the view that the natural sciences are the only or most accurate way of understanding phenomena. The term[edit] History[edit] Recent Anglo-American developments[edit] See also[edit] Notes[edit]

-- Philosophy of mind A phrenological mapping[1] of the brain – phrenology was among the first attempts to correlate mental functions with specific parts of the brain Philosophy of mind is a branch of philosophy that studies the nature of the mind, mental events, mental functions, mental properties, consciousness, and their relationship to the physical body, particularly the brain. The mind–body problem, i.e. the relationship of the mind to the body, is commonly seen as one key issue in philosophy of mind, although there are other issues concerning the nature of the mind that do not involve its relation to the physical body, such as how consciousness is possible and the nature of particular mental states.[2][3][4] Mind–body problem[edit] Our perceptual experiences depend on stimuli that arrive at our various sensory organs from the external world, and these stimuli cause changes in our mental states, ultimately causing us to feel a sensation, which may be pleasant or unpleasant. Arguments for dualism[edit]

Blue Marble: Animations This spectacular “blue marble” image is the most detailed true-color image of the entire Earth to date. Using a collection of satellite-based observations, scientists and visualizers stitched together months of observations of the land surface, oceans, sea ice, and clouds into a seamless, true-color mosaic of every square kilometer (.386 square mile) of our planet. These images are freely available to educators, scientists, museums, and the public. This record includes preview images and links to full resolution versions up to 21,600 pixels across. Much of the information contained in this image came from a single remote-sensing device-NASA’s Moderate Resolution Imaging Spectroradiometer, or MODIS. Flying over 700 km above the Earth onboard the Terra satellite, MODIS provides an integrated tool for observing a variety of terrestrial, oceanic, and atmospheric features of the Earth. Note: Often times, due to the size, browsers have a difficult time opening and displaying images.

World religions Menu Sponsored link. Symbols of some of the largest religions in the world: The symbols of fourteen religions are shown. Clockwise from the North Pole, they are: Baha'i, Buddhism, Christianity, Confucianism, Hinduism, Islam, Jainism, Judaism, Shinto, Sikhism, Taoism, Wicca and some other Neopagan religions, Zoroastrianism, and Druidism. This graphic was donated to us along with the copyright. A menu with links to non-theistic beliefs, ethical groups,philosophies, spiritual paths, etc is located elsewhere on this site. Approximate religious membership as a percentage of the world population: Introductory thoughts: Disclaimer: Information for these essays was extracted from reliable sources, and believed to be accurate and reasonably unbiased. If you find any errors here, please report them so that we can list them on our errata page and correct our essays. World religions: There are many, long established, major world religions, each with over three million followers. Neopagan religious faiths:

Where to from now?

Related:
Related:  it's over in a billion years