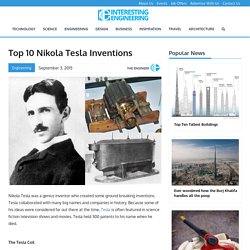 Tesla collaborated with many big names and companies in history. Because some of his ideas were considered far out there at the time, Tesla is often featured in science fiction television shows and movies. Tesla held 300 patents to his name when he died. The Tesla Coil Chances are that you have already seen this invention. The Magnifying Transmitter One of Tesla’s biggest obsessions was providing power wirelessly and he had intended the Tesla Coil to be part of his wireless power systems.

The Tesla Turbine Tesla saw the rise of the piston engine in the automobile industry as a way to make a change in the world. The Shadowgraph While Rontgen has been credited with developing the first x-ray films called shadowgraphs, there is clear evidence that Tesla may have been working on that beforehand. The Radio Before his lab burnt down, Tesla was working on developing a radio. The Neon Lamp The Induction Motor. Bouteille solaire (solution écologique) How to Make a Portable Solar Generator.

Generators working on solar power is the most important need of the decade, which is facing acute shortage of hydel energy source. This solar powered generator is highly used in some remote areas or in small locations where there is a shortage of power supply. In this sense, it becomes highly useful for domestic purposes as it can be used in homes whenever there is short run power failure. It can also be used in small boats or travelers where there is complete absence of electrical power. The construction of a generator powered with solar energy is a simple task.

Solar Powered Generator As mentioned earlier, generators made up of solar energy is highly useful in the present world of acute power shortage. Materials Required To construct one efficient generator working in solar energy, you need the materials that are listed below: - Rectangle of sturdy wood, - Solar cells, - Double-sided stick foam strips, - Soldering iron and solder, and - Digital multimeter. Making Process. 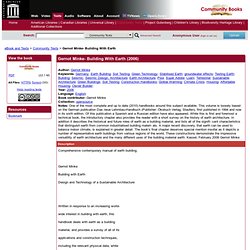 This volume is loosely based on the German publication Das neue Lehmbau-Handbuch (Publisher: Ökobuch Verlag, Staufen), first published in 1994 and now in its sixth edition. Of this publication a Spanish and a Russian edition have also appeared. While this is first and foremost a technical book, the introductory chapter also provides the reader with a short survey on the history of earth architecture. Description. Research. German Scientists Create Lithium Ion Battery that Can Charge an Electric Car for 27 Years.

Scientists at the Center for Solar Energy and Hydrogen Research Baden-Wurttemburg (ZSW) have developed one of the most efficient lithium-ion batteries yet. 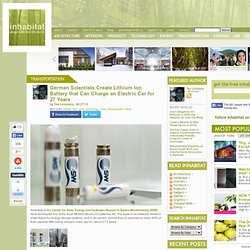 The super li-on batteries herald a bright future for energy storage systems, and in an electric vehicle they’re expected to retain 85% of their capacity after being charged every day for “about 27.4 years.” After 10,000 complete charging and discharging cycles, with a complete charge and discharge cycle per hour, these lithium-ion batteries still retain more than 85% of the initial capacity. This means that an electric car with those batteries could be fully charged every day for about 27.4 years and still be going strong. The power density of these batteries, which measures the available power per unit of weight, is also very high at 1,100 watts per kilogram. For an electric vehicle, this means short charging times and a superior acceleration capability. Via Treehugger. Land Art Generator Initiative. The School of Electrical Engineering, Mathematics and Computer Science at Delft University of Technology (TU Delft) has demonstrated a working prototype of an entirely new type of wind energy generator—the EWICON. 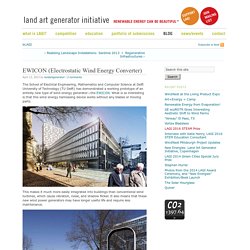 What is so interesting is that this wind energy harnessing device works without any blades or moving parts. This makes it much more easily integrated into buildings than conventional wind turbines, which cause vibration, noise, and shadow flicker. It also means that these new wind power generators may have longer useful life and require less maintenance. The science behind it is less than intuitive. The model-EWICON is quite abstract in appearance. But this video may help to explain it… It reminds us a little of the principle at work in Kelvin’s Thunderstorm, but while in Kelvin’s model the charged particles are moved by gravity, in the EWICON, the particles are moved by the wind. 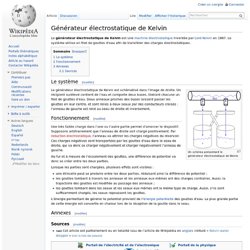