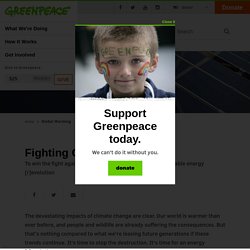 They’re also one of the main culprits polluting our air, water and soil. Coal-burning power plants, for example, produce millions of tons of toxic sludge every year, and we’re stilling reeling from the impacts of the 2010 BP Deepwater Horizon spill that rocked the Gulf of Mexico. As global temperatures increase, sea level rise and extreme weather become even bigger threats to communities at home and around the world. Already in the U.S. we’ve seen major hurricanes, floods, drought and wildfires all linked to climate change, and that’s just in the past few years. We see a different future—one built on clean, renewable energy. Join the Energy [R]evolution That’s not just good for the environment, it’s good for the economy, too. Still, we need more. But they’re still the exception. Get Involved Ready to join the energy [r]evolution for a better climate? At Security Council, climate change citied among factors impacting stability in Sahel.

26 May 2016 – At a meeting today in the United Nations Security Council on the situation in the Sahel region of sub-Saharan Africa, senior UN officials stressed that climate change plays a direct role in the region’s security, development and stability by increasing drought and fuelling conflict. 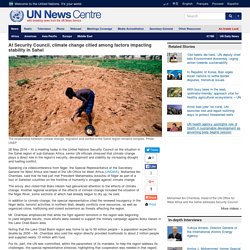 Speaking via videoconference from Niger, the Special Representative of the Secretary-General for West Africa and Head of the UN Office for West Africa (UNOWA), Mohamed Ibn Chambas, said that he had just met President Mahamadou Issoufou of Niger as part of a tour of Sahelian countries on the frontline of humanity’s struggle against climate change. French minister warns of mass climate change migration if world doesn't act. Global warming will create hundreds of millions of climate change migrants by the end of the century if governments do not act, France’s environment minister has warned. 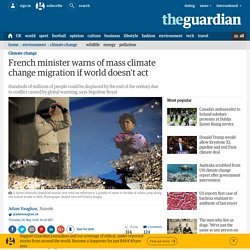 Ségolène Royal told ministers from 170 countries at the UN environment assembly in Nairobi that climate change was linked to conflicts, which in turned caused migration. “Climate change issues lead to conflict, and when we analyse wars and conflicts that have taken place over the last few years we see some are linked to an extent to climate change, drought is linked to food security crises,” she said. 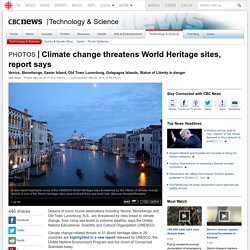 Climate change-related threats to 31 World Heritage sites in 29 countries are highlighted in a new report released by UNESCO, the United Nations Environment Program and the Union of Concerned Scientists today. There are 1,031 World Heritage sites around the world, representing sites of "outstanding universal value" because of their importance in capturing human cultural traditions, creative genius, history or exceptional natural phenomena. 'Climate change could eventually even cause some World Heritage sites to lose their status.' - Adam Markham, lead author of the report "Some Easter Island statues are at risk of being lost to the sea because of coastal erosion.

Old Town Lunenburg, Canada Old Town Lunenburg, N.S. Urbanization and Climate Change in Small Island Developing States. James Hansen: Why I must speak out about climate change. Carbon Dioxide. ExxonMobil: Climate Change Is Real, But ¯\_(ツ)_/¯ Our Crime Against the Planet, and Ourselves. Photo This is the fourth in a series of dialogues with philosophers and critical theorists about violence. 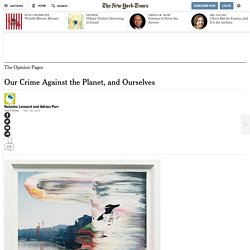 This conversation is with Adrian Parr, a professor of environmental politics and cultural criticism at the University of Cincinnati and the director of the Taft Research Center. Her most recent book is “The Wrath of Capital: Neoliberalism and Climate Change Politics.” Natasha Lennard: In your work, you raise the idea of framing climate degradation as a form of violence, and potentially as a crime against humanity. What does it mean to speak of the human destruction of the climate in terms of criminal justice? Adrian Parr: There are three components to the claim that environmental degradation is a crime against humanity. What is the nature of this crime? However, humans are not all equally guilty of this crime. At the same time, the human species is an agent of justice, having crafted laws designed to hold criminals accountable. 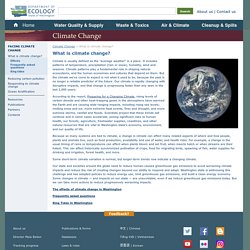 Climate is usually defined as the "average weather" in a place. It includes patterns of temperature, precipitation (rain or snow), humidity, wind and seasons. Climate patterns play a fundamental role in shaping natural ecosystems, and the human economies and cultures that depend on them. But the climate we’ve come to expect is not what it used to be, because the past is no longer a reliable predictor of the future. Our climate is rapidly changing with disruptive impacts, and that change is progressing faster than any seen in the last 2,000 years. According to the report, Preparing for a Changing Climate, rising levels of carbon dioxide and other heat-trapping gases in the atmosphere have warmed the Earth and are causing wide-ranging impacts, including rising sea levels; melting snow and ice; more extreme heat events, fires and drought; and more extreme storms, rainfall and floods.