They Didn't Notice, Nobody Ever Did. The Stark Truth. Tony leaned against his work desk, his head spinning. 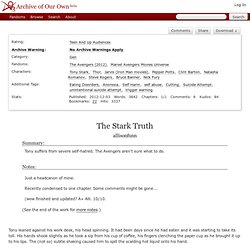 It had been days since he had eaten and it was starting to take its toll. His hands shook slightly as he took a sip from his cup of coffee, his fingers clenching the paper cup as he brought it up to his lips. The (not so) subtle shaking caused him to spill the scalding hot liquid onto his hand. "Damn it! " he cursed, setting the cup harshly down on the table, spilling more on his hand. He walked over to the bathroom and turned on the cold tap with his wrist and ran his fingers under it. "Shall I inform Miss Potts of your incident? 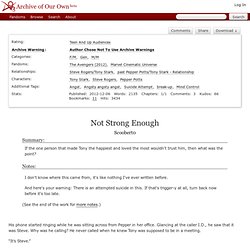 Glancing at the caller I.D., he saw that it was Steve. Why was he calling? He never called when he knew Tony was supposed to be in a meeting. Age of Darkness. Malibu doesn’t feel like home anymore. 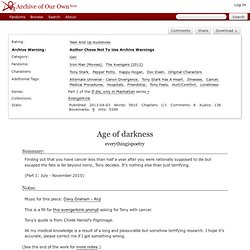 Tony has never been a sentimental man, not the kind to sigh and use big words while talking about sweet lost years of his childhood; on the contrary, he’s been the one to embrace change and newness and excitement and to always want to be somewhere else. At least all that is still a thing, even if the weights have shifted. Malibu feels alien even after two months; Tony can’t get used to the constant murmur of the sea down the cliff, the rock vibrating under the mansion’s foundations. The light and the space surprise him every morning when he wakes up, as long as it isn’t with the nightmares in front of his eyes. Tony finds himself, more often than he’d like to admit, wandering through the vast echoing rooms, running his fingers through the surfaces, enjoying the almost-silence, staring into space.

The cave – the cave was a routine, too. The patching-up is going… decently. It will come with time, Tony tells himself. He is just tired – so often. Oh. Fingerprints of Blood on gold (Sequal) ‘Wow, you are looking better, Tony,’ Pepper tells him when she visits on November 30th, two days after Tony’s come home from the clinic. 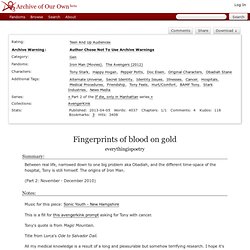 ‘I mean, you still look like shit, but you look more… alive. She must be a good influence on you.’ Blue As True As Blue Can Be (Child Abuse) Star-Spangled Pillboxes (Suicide Attempt) It happens as a sort of flashback, flashforward. 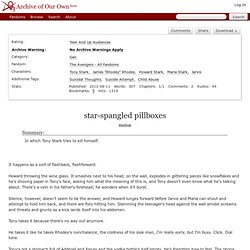 Howard throwing the wine glass. The Seat of Memory (Mentions of Child Abuse) It's not about the chair, Tony thinks as he stares at the broken remains. 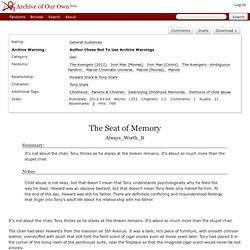 It's about so much more than the stupid chair. The chair had been Howard's from the mansion on 5th Avenue. It was a dark, rich piece of furniture, with smooth crimson leather, overstuffed with plush that still held the faint scent of cigar smoke even all these years later. Rabbits Aren't Pets (Child Abuse/Bunny Abuse) And the Sky is Grey. Chapter Text Steve watches Tony swan out of the meeting room, poking at a tablet with gloved hands. 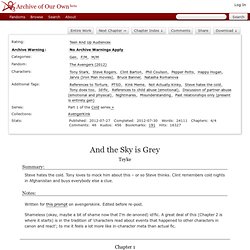 He's dressed in a custom-tailored suit that probably costs more than Steve can rationally think about – it would have to be custom; the jacket is far thicker than any other suit jacket Steve's ever seen, and he finds himself envious of how warm it looks even as he's irritated by that exact same fact. Iron Man Yes, Tony Stark...Not Recommended. Chapter Text Iron Man Yes, Tony Stark...Not Recommended Them moving in is actually more than a little awkward. 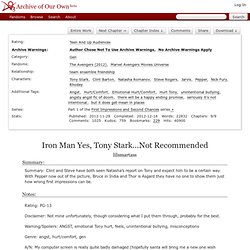 It’s not like Tony hadn’t already been planning on it, the single A left perfectly at the top of the tower, none of the other letters of his name surrounding it, is as close to an omen as he’s ever likely to see. When he remodelled and redecorated he created space for all of them. He was however, waiting for Bruce to calm down enough to come back from whichever part of India he’s holed himself up in. All of which is why it’s so awkward when, at one of the post clean-up debriefings Fury makes them go to after making them help with rubble removal in their full gear so the press can identify them doing it, the man barks, “Stark. Steve blushes and says, “Yes sir,” before Barton, who’s already opened his mouth can object. And that’s that really, Fury’s always been a demanding bastard and Tony can hardly say they’re not invited. “Three days,” Fury barks. She raises an eyebrow at him. A.I.s and Lullabies (Child Abuse) Apropos of Nothing (Self-Esteem, Kidnapping) 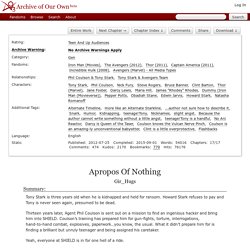