Old Habits Die Hard - Seito - The Avengers (2012), The Avengers - All Fandoms. When you were trained as an assassin at a tender young age, those skills tend to follow you for life. 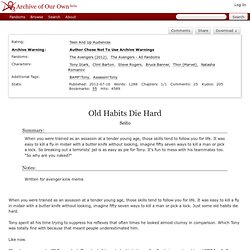 It was easy to kill a fly in midair with a butter knife without looking, imagine fifty seven ways to kill a man or pick a lock. Just some old habits die hard. Tony spent all his time trying to suppress his reflexes that often times he looked almost clumsy in comparison. Which Tony was totally fine with because that meant people underestimated him. Like now. Sivass. More Worthy Than Believed - LadyShadowphyre - The Avengers (2012) THE FIRST TIME HE EVER TOUCHED MJOLNIR, Tony was only barely aware of doing so. 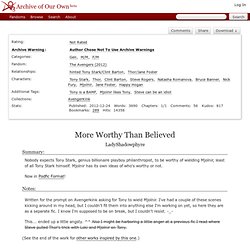 It was the middle of the night, he had been up for seventy-two hours straight and counting with the whole Loki fiasco, and was distracted by his tablet as he made his way by memory to the kitchen to get more coffee. He was not expecting the way to be blocked by something metal-hard the size of a cat lying in the middle of the floor, and so tripped over it. "Oh, for fuck's sake," he grumbled, glaring down at it. Man Out of Time - samptra - The Avengers (2012), Captain America (Movies), Th... Another World, Another Time - Skydiver_Tomyo - The Avengers (2012)