Pink Is The Color Of. . .? Running to Keep in the Same Place (Pre-Slash) Tony is a certified genius, he's got the patents and the crowds of adoring fans to prove it, and he's also very good at multitasking. 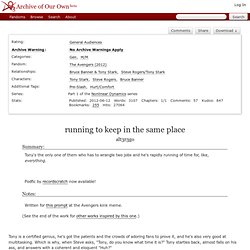 Which is why, when Steve asks, "Tony, do you know what time it is? " Tony startles back, almost falls on his ass, and answers with a coherent and eloquent "Huh? " In his defense he's been working for a few hours now and, more to the point, had been sure he was alone in the lab. Wasn't Steve supposed to be in DC right now, anyway? "Aren't you supposed to be in DC right now? " Steve frowns. "Friday the 21st, sir," JARVIS replies and for a moment Tony is so proud of them both that JARVIS actually manages to sound long-suffering. "Have you been down here for two days?

" That would probably explain the headache that's been distracting him for the last few hours. Grabbing Hold. Another Thing Coming Undone. Balancing Act. Steve knew why he went back and it wasn't the stupid cellular phone everyone kept telling him he needed to carry around. 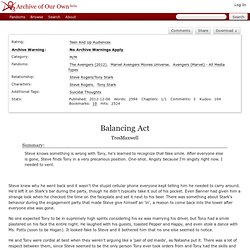 He'd left it on Stark's bar during the party, though he didn't typically take it out of his pocket. Even Banner had given him a strange look when he checked the time on the faceplate and set it next to his beer. There was something about Stark's behavior during the engagement party that made Steve give himself an 'in', a reason to come back into the tower after everyone else was gone. No one expected Tony to be in supremely high spirits considering his ex was marrying his driver, but Tony had a smile plastered on his face the entire night. He laughed with his guests, toasted Pepper and Happy, and even stole a dance with Ms. How Not To Be Nothing. FILL (Mentions of child abuse, homophobia) Meant to Fly - mrhd - The Avengers (2012) Tony’s obsession with flying started when he was little. 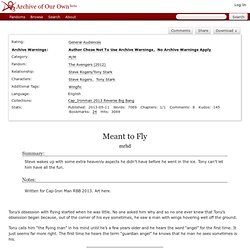 No one asked him why and so no one ever knew that Tony’s obsession began because, out of the corner of his eye sometimes, he saw a man with wings hovering well off the ground. Tony calls him “the flying man” in his mind until he’s a few years older and he hears the word “angel” for the first time. It just seems far more right. The Twice-Told Tale. Catechism - Chapter 1 - manic_intent - The Avengers (2012), Iron Man (Movies) Bulletproof. Birds of a Feather - LoquitorLatinae - The Avengers (Marvel Movies) Bodyswap! Main Content <p id="javascript-warning"> While we&#x27;ve done our best to make the core functionality of this site accessible without javascript, it will work better with it enabled. 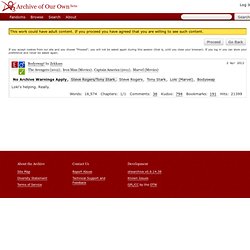 Please consider turning it on! </p> Archive of Our Own beta Log In Site Navigation This work could have adult content. If you accept cookies from our site and you choose "Proceed", you will not be asked again during this session (that is, until you close your browser). Footer Close. Big Boy Toys, an avengers fanfic. Big Boy Toys by extantecstacy Summary: Steve finally gets fed up with Tony's juvenile pranks. 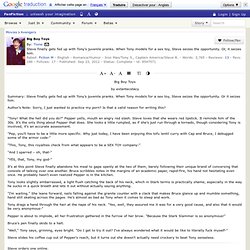 When Tony models for a sex toy, Steve seizes the opportunity. Or it seizes him. Semaphore. Weighing of the Heart - Chapter 1 - scifigrl47 - The Avengers (2012) Ghost in the Wires. Reasons Why (Whether They're Real Or Not) - infinite_wonders - Marvel Avengers Movies Universe, The Avengers (2012), The Avengers - All Fandoms. For Tony, the beginning thoughts of there being a them— as in Tony and Steve together— is like everything else in the fucked-up, train-wreck-waiting-to-happen that he calls his life; it starts off with a bang and a metric fuck-ton of collateral damage. 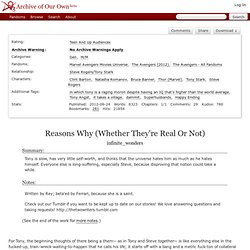 That is to say, Tony’s just been missile bombed through two buildings and a lamp-post, having gotten in the way of an attack meant for fucking Steve; he’s concussed, bleeding from several vital points in his body where his metal suit has bent inward and pierced his organs, and all he can think is a relieved, ‘Thank god he’s okay’ instead of experiencing the usual, ulcer causing mixture of rage and irritation. And yeah, as far as epiphanies go, it’s not the best— in timing, place or content— but it’s his, and Tony’s never been the type of person to not notice something good when he sees it. --and then proceeds to fly back into the fray as though his entire life hasn’t just changed, for better or for worse. ~o.O.o~ “What happened?” “Hey. Right. The Rain Can't Drown You. 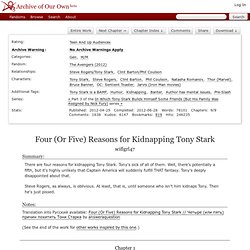 There was a faint chuckle from the other end of the line. “You woke me up, and you expect me to be entertaining?” Steve Rogers asked. “Even for you, Stark, that shows a distinct lack of class.” Draining Life (Vampire!Tony) Dying For A Drink ( Vampire!Tony) But the Heart. Chapter Text It is not flesh and blood but the heart which makes us fathers and sons. 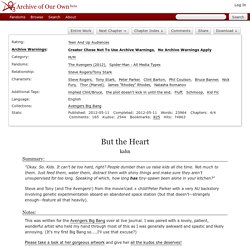 ~Johann Schiller. It's All In The Mind. The first time it happened, Tony was thirteen and about to be beaten up by the football team. 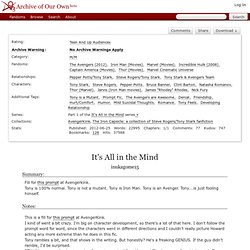 He hadn’t meant to do anything, but it just happened. One moment Billy was swinging at him and the next he was flying backwards into the dumpster. Tony had all of five seconds to stare in utter confusion after him, wondering what the hell had just happened, before the rest of Billy’s friends began to crowd in on him. I Know. The first time Tony almost told Steve he loved him, he was drunk. 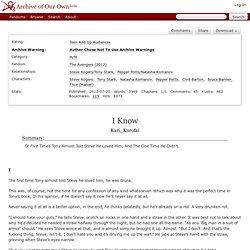 This was, of course, not the time for any confession of any kind whatsoever. Which was why it was the perfect time in Tony’s book. In his opinion, if he doesn’t say it now he’ll never say it at all. Never saying it at all is a better option, in the end, he thinks belatedly, but he’s already on a roll. A very drunken roll. “I should hate your guts,” he tells Steve, scotch on rocks in one hand and a straw in the other. Equations of Living and Dying. For Tony, it's something that has always been there, in the back of his mind nestled between the numbers and equations. Hell, most of the thoughts occur in forms of equations.

Calculations of height and force of impact or angles and the pressure behind a blade or even how much energy needed to stop a heart. They're always there, some ordinary, some innovated and unique but always there. The thoughts never leave but that doesn't mean he is always thinking about it, his mind doesn't work like that. Sometimes the equations of death get pushed forward more then the rest and he actively finds himself contemplating them. Will of Iron, Heart of Glass. This Grey House Where I Come From. There was never any actual violence. There were no gunpoints, ski masks, or gloved hands clamped over a mouth. There was no blood, and any bruising that did happen was the kind of minor stuff that came with heat-of-the-moment moments, not malice. Hell, Pepper had been known to leave some seriously impressive scratches down his back, before Tony kept being too Tony and she had to leave for the West Coast before they got too tangled up in one another and started causing damage.

He doesn’t even think about certain memories most the time, will go months without his brain being a goddamn traitor, and anyway it was years ago. Ancient history that doesn't even begin to compare to recent history. Working on Together. Paint the Sky Grey (Character Death) It was raining, large droplets of the wet stuff pounding against the windows of Stark Tower. It could have been Tuesday, or maybe it was Wednesday? Tony had lost track of the days – the time too. But that was easier to judge by how much light made its way through the grey storm clouds that had settled over the city. Like right now, it was probably close to midnight. Yeah, midnight sounded right. Sins of the Father. Like Hard Work (MUST READ)