Criminologist Paul Wilson jailed over ‘brazen’ child sexual abuse. A Queensland criminologist has been jailed for brazen and persistent sexual abuse of a young girl in the 1970s. 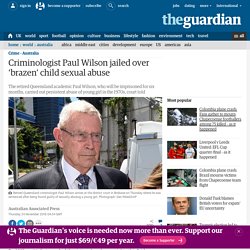 Paul Wilson, 75, first assaulted the victim when she was eight at his Brisbane home in Indooroopilly and only stopped when she moved away from the area. Some of the abuse was carried out while other children and an adult were in the house. Judge Julie Dick sentenced Wilson to 18 months imprisonment suspended after six months. Sex trafficking survivor says police were among hundreds of abusers. DENVER - She survived years of abuse and exploitation at the hands of sex traffickers and now she’s telling her story. 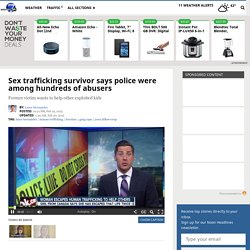 Jessa Dillow-Crisp told an audience at the Colorado State Capitol, during Human Trafficking Awareness and Advocacy Day, that her victimization began when she was a child. "I was a little girl and was sexually abused by family members," she said. Teal Swan's story of Satanic Ritual abuse PART ONE. By Christopher Oswalt. 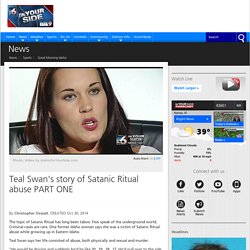 Mythe. Police. Kee MacFarlane. Kathleen 'Kee' MacFarlane[1] (born 1947[2]) was the Director of Children's Institute International.[3] She developed the concept of the anatomically correct doll for children to use during interviews concerning abuse and played a significant role in the McMartin preschool trial. 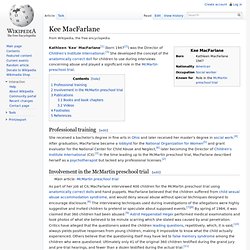 Professional training[edit] She received a bachelor's degree in fine arts in Ohio and later received her master's degree in social work.[4] After graduation, MacFarlane became a lobbyist for the National Organization for Women[5] and grant evaluator for the National Center for Child Abuse and Neglect,[6] later becoming the Director of Children's Institute International (CII).[3] In the time leading up to the McMartin preschool trial, MacFarlane described herself as a psychotherapist but lacked any professional licenses.[2] Involvement in the McMartin preschool trial[edit] Publications[edit] Books and book chapters[edit] MacFarlane, K; Bulkley J (1982). Videos[edit] Debbie Nathan - Sybil Exposed. Day-care sex-abuse hysteria. Day-care sex-abuse hysteria was a moral panic that occurred primarily in the 1980s and early 1990s featuring claims against day-care providers of Satanic ritual abuse and several forms of child abuse.[1][2] A prominent case in Kern County, California, first brought the issue of day-care sexual abuse to the forefront of the public awareness, and the issue figured prominently in news coverage for almost a decade. 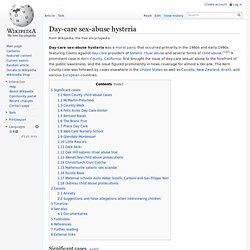 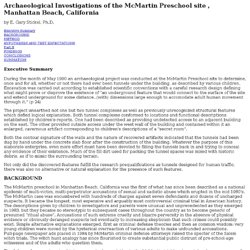 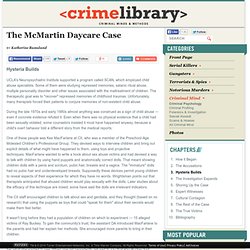 Some of them were studying repressed memories, satanic ritual abuse, multiple personality disorder and other issues associated with the maltreatment of children. The therapeutic goal was to "recover" repressed memories of childhood traumas. Unfortunately, many therapists forced their patients to conjure memories of non-existent child abuse. During the late 1970s and early 1980s almost anything was construed as a sign of child abuse — even if concrete evidence refuted it. Even when there was no physical evidence that a child had been sexually violated, some counselors insisted it must have happened anyway, because a child's overt behavior told a different story from the medical reports. Apparent Suicide : Witness in McMartin Trial Found Dead.

A former defense investigator who was scheduled to testify in the McMartin Pre-School molestation case Thursday was found dead of an apparent self-inflicted gunshot wound earlier in the day, authorities reported. 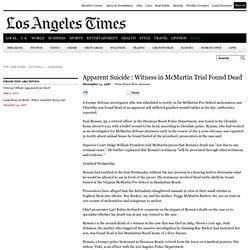 Paul Bynum, 39, a retired officer in the Hermosa Beach Police Department, was found in his Glendale home about 6 a.m. with a bullet wound to his head, according to Glendale police. Bynum, who had worked as an investigator for McMartin defense attorneys early in the course of the 3-year-old case, was expected to testify about animal bones he found buried at the preschool, prosecutors in the case said.

Superior Court Judge William Pounders told McMartin jurors that Bynum's death was "not due to any criminal cause. " The McMartin Daycare Case — How it Began. In legal tradition, it is the province of the judge to determine whether an expert witness is truly an expert. 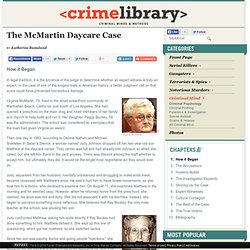 In the case of one of the longest trials in American history, a better judgment call on that score could have prevented horrendous damage. Virginia McMartin Virginia McMartin, 79, lived in the small oceanfront community of Manhattan Beach, California, just south of Los Angeles. She had opened a preschool on the main drag and hired members of her family and church to help build and run it. The Accusations — The McMartin Daycare Case. Judy then took Matthew to Richstone Center, a counseling program for sexual abuse victims. 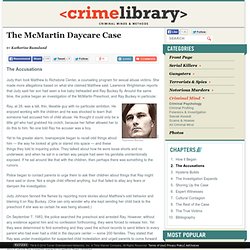 She made more allegations based on what she claimed Matthew said. Lawrence Wrightsman reports that Judy said her son had seen a live baby beheaded and Ray Buckey fly. The True Victims — The McMartin Daycare Case. In the wave of hysteria during the 1980s, hundreds of people were arrested on the suspicion of child abuse, especially people working in daycare centers. In part, this was thanks to the therapists and investigators involved in the McMartin Preschool fiasco who announced on national talk shows and to Congress that a network of well-financed satanic ritual abusers was operating secretly across the country.

Despite the fact that children were being coached, even coerced, to describe outrageous stories for which there was no corroborating physical evidence, and some of their tales bordered on the preposterous, suspected adults were convicted based on this testimony alone. As the hysteria died down during the 90s, order was restored and some of the accused managed to repair their broken lives, but not all. A few people went to prison and there they have remained until recently. John Stoll One such man, John Stoll, has been locked up for 20 years. Satanist paedophile ring 'ritually raped up to 25 children'

Henry Lee Lucas. Extrait Bush. Jack Parsons (rocket engineer) John Whiteside Parsons (born Marvel Whiteside Parsons; October 2, 1914 – June 17, 1952), better known as Jack Parsons, was an American rocket engineer, chemist, and Thelemite occultist. A pioneer in solid-fuel rocket research and development, he was affiliated with the California Institute of Technology (Caltech), and was one of the principal founders of both the Jet Propulsion Laboratory (JPL) and the Aerojet Engineering Corporation. Born in Los Angeles, California, and raised into a wealthy family in Pasadena, Parsons developed an early interest in rocketry inspired by science fiction literature, and in 1928 began amateur rocket experiments with school friend Edward Forman.

A chief investigator for the agency’s inspector general wrote a memo outlining eight cases that were derailed by senior officials, including one instance of interference by Clinton’s chief of staff, Cheryl Mills. Any mention of the cases was removed from an IG report about problems within the Bureau of Diplomatic Security (DS), which provides protection and investigates crimes involving any State Department workers overseas. “It’s a coverup,” declared Cary Schulman, a lawyer representing the whistleblower, former State Department IG senior investigator Aurelia Fedenisn. “The whole agency is impaired. “Undue influence . . . is coming from political appointees.