Jack Wills underwear party ads too 'sexualised' for teens, says watchdog. A Jack Wills catalogue mailout featuring images of young people drinking and partying in their underwear has been banned by the UK advertising watchdog for being too sexualised for young teenagers.

The clothing brand featured a range of images of scantily clad young models partying in its spring catalogue. The promotional text referred to “flirty delicate laces”, “it’s what’s underneath that counts” and “midnight mischief”. The Advertising Standards Authority received a complaint from a parent who believed the images were unsuitable in a catalogue targeting and seen by teenagers. Jack Wills defended the images, saying that they “reflected the life stages” of its target audience, 18- to 24-year-old university students, and that the group depicted were on a weekend away ... enjoying a pyjama party”.

It claimed the ads were not “overly sexual or encouraging underage sexual activity”.

Jack Wills and Richard Nicoll? An unlikely fashion collaboration which works. Richard Nicoll and Jack Wills: it doesn’t sound like a natural combination. 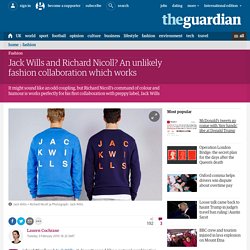 Minimalist London fashion week designer meets massive company loved by posh British teenagers is proper odd-couple stuff. But, actually, looking at his first collection for the brand, perhaps that’s why it works so well. Here are five reasons that RN for JW is a match that totally makes sense. He isn’t British Originally from Australia, Nicoll’s outsider perspective on all things Brit brings something different.

He isn’t about an overhaul Instead, Nicoll is into the Jack Wills staples –the tracksuit pants, the hoodies, the gilets. The logo is front row centre Nicoll is not a snob when it comes to design – he likes a bit of wording on clothes, see his SS15 menswear sweatshirts that read, “Discreet”. The Nicoll sense of fun and colour is in the building Grown-ups will like it too This is something that Nicoll is busy creating Jack Wills clothes to be worn beyond the traditional 18-25 demographic. LESSONS OF BRAND SUCCESS: JACK WILLS.

Meet Jack Wills, the lifestyle brand for cool and chic university students, launched in 1999 by Peter Williams and Robert Shaw in Devon. 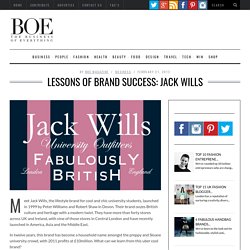 Their brand oozes British culture and heritage with a modern twist. They have more than forty stores across UK and Ireland, with nine of those stores in Central London and have recently launched in America, Asia and the Middle East. In twelve years, this brand has become a household name amongst the preppy and Sloane university crowd, with 2011 profits at £10million. What can we learn from this uber cool brand? 1. 2. 3. Their most notable event is the Jack Wills Varsity Polo, which invites young people to engage with the brand and there are other great events like organized ski trips in the French Alps for university students. 4. 5. 6. 7. 8.

Analysis of JackWills' Marketing Strategies. Jack Wills blasted for ‘sexually inappropriate’ ad - Marketing Week. The ad, which was included in the brand’s 2016 spring catalogue, featured various images of male and female models in their underwear drinking, dancing and on a bed together. 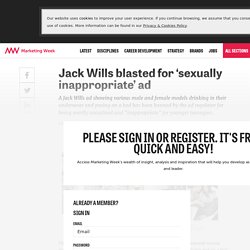 The text at the top stated “Underwear… [sic] pure and comfortable cottons, or flirty delicate laces, whatever your choice, you can be sure it’s what’s underneath that counts”. The large text at the bottom stated “midnight mischief”. Another page, promoting loungewear, featured images of male and female models on a bed. While some of the models wore loungewear, one male model was topless on a bed with a woman while reading and another woman wore a bra with a strap falling off her shoulder. Alongside the images, text stated: “A favourite tee and your boxers, or a lounge short and bra; this is loungewear made for the morning after the night before.” A complainant argued the images were unsuitable for publication in a clothing catalogue that was targeted at, and seen by, teenagers. 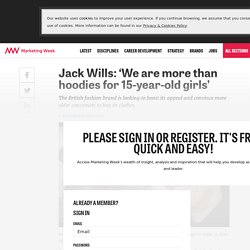 Speaking at the ‘#DearJack’ campaign launch last night (3 November) at its flagship store, the company highlighted how it wants to be seen as much more than a brand for young teenage girls, which it joked many perceive as its entire customer base. “We are more than hoodies for 15-year-old girls. Look at me, I’m a 42 year old man and I’m wearing head to toe Jack Wills,” said Jack Wills’s founder and CEO Peter Williams. Williams left the company briefly in 2012 but returned in August last year. Since then he has worked with Emma Alexander, Jack Wills’s chief product officer, to create products and marketing that portray the brand in a more “grown-up” way.

Alexander told Marketing Week that Jack Wills’ latest collection reflects its new direction and that neither the changes or Brexit have altered the company’s price points.