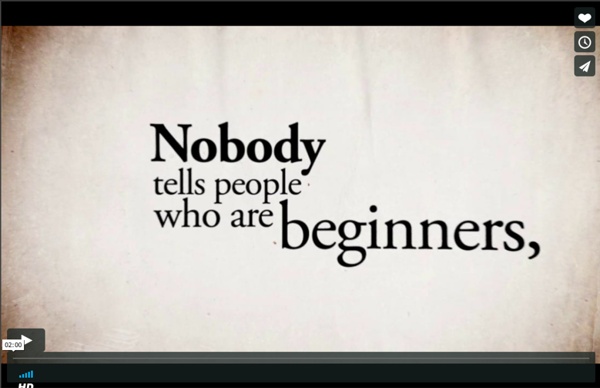 How to use your skills for evil/good I am usually not a fan of forwards, but this is really funny. A woman loses her cat and asks her designer friend to drop everything and make a poster to post around the neighborhood. Anyone who works in a service role (developers, marketers, pr peeps) gets these kind of requests from friends, but they never quite turn out this funny. From: Shannon Date: Monday 21 June 2010 9.20am To: David Subject: Poster Googling for code solutions can be tricky — here’s how to get started Mad Libs was driving me mad. In order to learn JavaScript earlier this quarter, I set out to build a web application that would mimic a game of Mad Libs and immediately got stuck. The idea was that the game would prompt you to enter a set of random words according to specific parts of speech, and then return to you a story whose blanks had been filled in with those words. Cue a hilarious mix match of sentences. In theory, building it would be simple: have an input form in which the user entered various words.

PixelProspector - the indie goldmine On the 30th July 2014 the site got updated, restrutured and redesigned… however the update is still not finished and thus this new Indie Resources overview page is partly incomplete. In case you are missing something you can still check out the outdated old Indie Resources page until the update is complete. Thank you for your understanding. (Game Making Tools, Game Design, Postmortems, Programming, Project Management…) (Create/Download Graphics, Hire Graphic Designer…) (Create/Download Sound + Music, Hire Sound Designer/Musician/Voice Actor…) Straight White Male: The Lowest Difficulty Setting There Is I’ve been thinking of a way to explain to straight white men how life works for them, without invoking the dreaded word “privilege,” to which they react like vampires being fed a garlic tart at high noon. It’s not that the word “privilege” is incorrect, it’s that it’s not their word. When confronted with “privilege,” they fiddle with the word itself, and haul out the dictionaries and find every possible way to talk about the word but not any of the things the word signifies. So, the challenge: how to get across the ideas bound up in the word “privilege,” in a way that your average straight white man will get, without freaking out about it? Being a white guy who likes women, here’s how I would do it: Dudes.

10 Useful Web Apps for Designers DesignWoop welcomes this guest post by Tomas Laurinavicius. Since the iPhone and iPad entered the market you can hear lots of news about apps for these devices. Tons of apps available today and you can find everything you want. But today I would like to share 10 handy web-based apps for designers. To use these apps you don’t need to buy an iPhone or iPad, you can use them without any additional software or device, you just need a web browser.

Curses Programming with Python — Python 2.7.10 documentation Abstract This document describes how to write text-mode programs with Python 2.x, using the curses extension module to control the display. What is curses? The curses library supplies a terminal-independent screen-painting and keyboard-handling facility for text-based terminals; such terminals include VT100s, the Linux console, and the simulated terminal provided by X11 programs such as xterm and rxvt. CSS Tutorial - Learn CSS Codes and Layouts CSS stands for Cascading Style Sheets. It is a stylesheet language that acts as the presentation layer for markup languages such as HTML and XHTML. The presence of CSS allows us to separate the layout component from the information component. In essence, the HTML document becomes the information component, while the CSS Style Sheet becomes the layout component.

Depression Part Two I remember being endlessly entertained by the adventures of my toys. Some days they died repeated, violent deaths, other days they traveled to space or discussed my swim lessons and how I absolutely should be allowed in the deep end of the pool, especially since I was such a talented doggy-paddler. I didn't understand why it was fun for me, it just was. But as I grew older, it became harder and harder to access that expansive imaginary space that made my toys fun. I remember looking at them and feeling sort of frustrated and confused that things weren't the same.

Digital Marketing: 7 Tips for Generating Fresh Ideas The Digital Marketing Series is supported by HubSpot, an inbound marketing software company based in Cambridge, Mass., that makes a full platform of marketing software, including marketing analytics tools. We've all been there: You've had a raucous weekend, and now it's Monday morning, time to drag yourself into work. If you have a certain kind of job, it's no big deal. You can coast a bit, maybe surf the web and take a few extra trips to the water cooler until you feel up to really working. But if your job requires you to be creative — and perhaps you're getting paid a decent amount to come up with ideas — then you don't have that option. In that case, you have to start coming up with ideas even though you'd rather be lying on your couch eating Cheez Doodles.

Bartle Test The Bartle Test of Gamer Psychology is a series of questions and an accompanying scoring formula that classifies players of multiplayer online games (including MUDs and MMORPGs) into categories based on their gaming preferences. The test is based on a 1996 paper by Richard Bartle[1] and was created in 1999–2000 by Erwin Andreasen and Brandon Downey.[2][3][4][5] Although the test has met with some criticism[6] for the dichotomous nature of its question-asking method, as of October 2011, it had been taken over 800,000 times.[7][8] The result of the Bartle Test is the "Bartle Quotient", which is calculated based on the answers to a series of 30 random questions in the test, and totals 200% across all categories, with no single category exceeding 100%.[9] For example, a person may score "100% Killer, 50% Socializer, 40% Achiever, 10% Explorer", which indicates a player who prefers fighting other players relative to any other area of interest. Achievers[edit] Explorers[edit] Socializers[edit]

Blog Archive » Freebies – Paper Models and Minis If you’ve got cardstock and ink to spare, there are a few places out there to download free paper models and minis that you print and put together yourself. I don’t use them very often but, when I do, they always add a nice element to my game. Here are some places to download them for free. Foldup Paper Models – Wizards of the Coast Calvin and Hobbes at Martijn's - Bill Watterson Here's the text of a speech Bill Watterson gave at Kenyon College, Gambier Ohio, to the 1990 graduating class. SOME THOUGHTS ON THE REAL WORLD BY ONE WHO GLIMPSED IT AND FLED Bill Watterson Kenyon College Commencement May 20, 1990 I have a recurring dream about Kenyon. Top 6 Sites that Inspire and Educate If you’re a professional who likes to be intellectually stimulated and you enjoy keeping up with the latest news and breaking trends, the internet provides you with an endless choice of carefully curated sites to visit. Today, we bring you six of them that we believe are leaps and bounds above the rest. These sites will not only educate you on topics ranging from business and technology to art and design, they’ll motivate you to find your own, original ideas and see them through. They’re culturally relevant, they’re idea driven and most of all, they’re deeply inspirational.