Al-Razi, Abu Bakr Muhammad ibn Zakariyya' (d. 925) Perhaps the most famous and widely respected Islamic authority on medicine in the medieval period, al-Razi also aspired to a comparable achievement in philosophy and the other sciences such as alchemy. 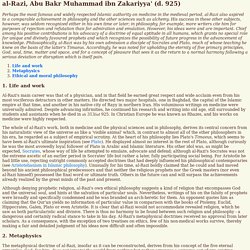 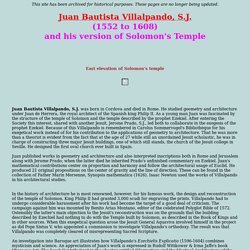 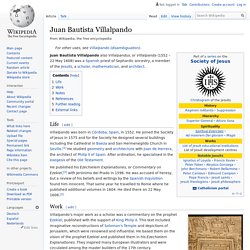 Life[edit] Villalpando was born in Córdoba, Spain, in 1552. He joined the Society of Jesus in 1575 and for the Society he designed several buildings including the Cathedral in Baeza and San Hermenegildo Church in Seville.[1] He studied geometry and architecture with Juan de Herrera, the architect of Philip II of Spain. After ordination, he specialised in the exegesis of the Old Testament. He published his Ezechielem Explanationes, or Commentary on Ezekiel,[2] with Jerónimo del Prado in 1596. Work[edit] A detail of one of Villalpando's representations of Solomon's Temple, cropped from a larger map of Jerusalem, note that he made other more intricate renderings focusing solely on the temple. Ebced hesabı - Vikipedi. Fred Alan Wolf. Fred Alan Wolf (born December 3, 1934) is an American theoretical physicist specializing in quantum physics and the relationship between physics and consciousness. 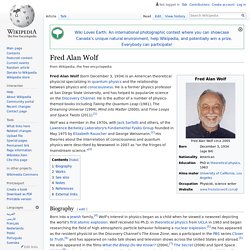 He is a former physics professor at San Diego State University, and has helped to popularize science on the Discovery Channel. He is the author of a number of physics-themed books including Taking the Quantum Leap (1981), The Dreaming Universe (1994), Mind into Matter (2000), and Time Loops and Space Twists (2011).[1] Wolf was a member in the 1970s, with Jack Sarfatti and others, of the Lawrence Berkeley Laboratory's Fundamental Fysiks Group founded in May 1975 by Elizabeth Rauscher and George Weissmann.[2] His theories about the interrelation of consciousness and quantum physics were described by Newsweek in 2007 as "on the fringes of mainstream science. 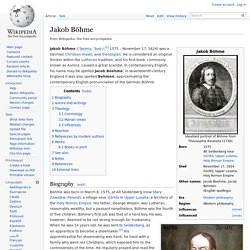 He is considered an original thinker within the Lutheran tradition, and his first book, commonly known as Aurora, caused a great scandal. In contemporary English, his name may be spelled Jacob Boehme; in seventeenth-century England it was also spelled Behmen, approximating the contemporary English pronunciation of the German Böhme. Biography[edit] Jakob Böhme (anonymous portrait) Böhme was born in March 8, 1575, at Alt Seidenberg (now Stary Zawidów, Poland), a village near Görlitz in Upper Lusatia, a territory of the Holy Roman Empire. In 1610 Böhme experienced another inner vision in which he further understood the unity of the cosmos and that he had received a special vocation from God. Lapis Lazuli Meanings and Uses. The Crystal Vaults Comprehensive Illustrated Guide to Crystals Your On-Line Guide to The Healing Energies, Metaphysical Properties, Legendary Uses, and Meaning of Introduction to the Meaning and Uses of Lapis Lazuli Lapis Lazuli is one of the most sought after stones in use since man's history began. 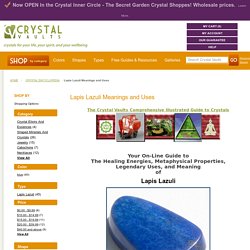 In ancient times Lapis Lazuli was most highly regarded because of its beautiful color and the valuable ultramarine dye derived from it. Physiognomy. Illustration in a 19th-century book about physiognomy Credence of such study has varied. 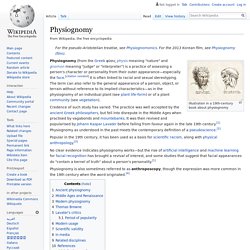 The practice was well accepted by the ancient Greek philosophers, but fell into disrepute in the Middle Ages when practised by vagabonds and mountebanks. It was then revived and popularised by Johann Kaspar Lavater before falling from favour again in the late 19th century.[1] Physiognomy as understood in the past meets the contemporary definition of a pseudoscience.[2] Sortes Vergilianae. History[edit] Classical instances[edit] Sir Philip Sidney's Defence of Poesie describes Roman beliefs about poetry and recounts a famous Sors Vergiliana by Decimus Clodius Albinus, a Roman who ruled Britain and laid claim to the Roman Empire, but was defeated in battle by Septimius Severus: 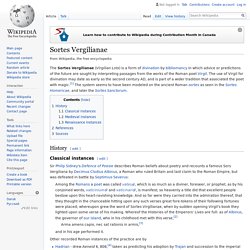 Transcript of the Recording Spiricom. Following in the footsteps of those famous explorers are some pioneers whose names will not be as familiar to you. 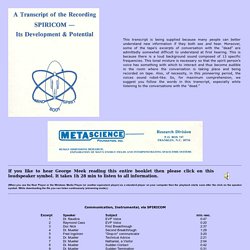 In 1956, two men in California, a photographer named Atilla von Szalay and a writer named Raymond Bayless began an era of what has become known as EVP [Electronic Voice Phenomenon]. They recorded on magnetic tape some paranormal voices-voices that should not, logically, have been there. Bayless reported their experiments in the Journal of the American Society for Psychical Research in the winter of 1959. The announcement made hardly a ripple. Not a single person contacted either the Society or the researchers to inquire about their work. Other pioneers who cooperated with Raudive included Theodore Rudolph, a high-frequency engineer who worked for the Telefunken firm. Crystals according to Nikola Tesla – Crystal Ashram. Institute of Noetic Sciences. The Institute of Noetic Sciences (IONS) is an American non-profit research institute, co-founded in 1973 by former astronaut Edgar Mitchell[1][2] and investor Paul N. 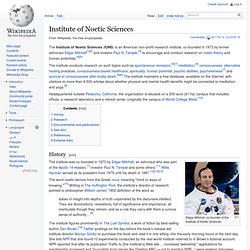 Temple,[3] to encourage and conduct research on noetic theory and human potentials.[4][5] The institute conducts research on such topics such as spontaneous remission,[6][7] meditation,[6] consciousness, alternative healing practices, consciousness-based healthcare, spirituality, human potential, psychic abilities, psychokenesis[7] and survival of consciousness after bodily death.[8][9] The institute maintains a free database, available on the Internet, with citations to more than 6,500 articles about whether physical and mental health benefits might be connected to meditation and yoga.[6] Headquartered outside Petaluma, California, the organization is situated on a 200-acre (81 ha) campus that includes offices, a research laboratory and a retreat center (originally the campus of World College West).[10] History[edit]

Samadhi. A state of meditative consciousness in Indian religions Samādhi (Sanskrit: समाधी, also called samāpatti), in Hinduism, Jainism, Buddhism, Sikhism and yogic schools, is a state of meditative consciousness. In the yogic traditions, and the Buddhist commentarial tradition on which the Burmese Vipassana movement and the Thai Forest tradition rely, it is a meditative absorption or trance, attained by the practice of dhyāna. Institute of Noetic Sciences. Omniscience. Omniscience /ɒmˈnɪʃəns/,[1] mainly in religion, is the capacity to know everything that there is to know. In particular, Hinduism and the Abrahamic religions (Judaism, Christianity, and Islam) believe that there is a divine being who is omniscient.

An omniscient point-of-view, in writing, is to know everything that can be known about a character, including past history, thoughts, feelings, etc. In Latin, omnis means "all" and sciens means "knowing". Definitions[edit] There is a distinction between: inherent omniscience - the ability to know anything that one chooses to know and can be known.total omniscience - actually knowing everything that can be known. Divination. Divination: The Synchronous Universe. Divination (from the Latin divinare "to foresee, to be inspired by a god", related to divinus, divine) Article: By Alex Whitaker 2011 Although today divination is largely considered to be a false 'science', there is no doubt that in the past a great emphasis and respect was placed on those who claimed to be capable of it. Divination methods vary by culture and religion but in all cases, divination relies on a symbolic key to decipher the underlying meaning of physical events.

The principle behind divination, is that it recognizes an essential link between our inner and outer reality. Learn Your Mayan Sign. Today is your spiritual birthday. The energy of the day you are born is fully active. Today you are in the day of Serpent and 10, and also week of the Owl. This is a very special day that comes around every 260 days. Aleister Crowley. After an unsuccessful attempt to climb Kanchenjunga and a visit to India and China, Crowley returned to Britain, where he attracted attention as a prolific author of poetry, novels, and occult literature. In 1907, he and George Cecil Jones co-founded a Thelemite order, the A∴A∴, through which they propagated the religion. After spending time in Algeria, in 1912 he was initiated into another esoteric order, the German-based Ordo Templi Orientis (OTO), rising to become the leader of its British branch, which he reformulated in accordance with his Thelemite beliefs.

Through the OTO, Thelemite groups were established in Britain, Australia, and North America. He spent the First World War in the United States, where he took up painting and campaigned for the German war effort against Britain, later revealing that he had infiltrated the pro-German movement at the behest of the British intelligence services. Early life[edit] Liber OZ sub figura LXXVII - Technical Libers of Thelema - The Libri of Aleister Crowley. Nagasiva gehonnom pile. Forer effect. Terence McKenna's Timewave Zero and the Fractal Time software. The Egyptian Sufi Dhu'l Nun al-Misri. Ma'rifa - Wikipedia. In Sufism, ma'rifa (Arabic: معرفة‎, translit. ma‘rifah, lit. 'knowledge') describes the mystical intuitive knowledge of spiritual truth reached through ecstatic experiences, rather than revealed or rationally acquired.

Jabir ibn Hayyan - Wikipedia. Emerald Tablet - Wikipedia. Alchemical and Hermetic text. Pseudo-Geber - Wikipedia. Dhul-Nun al-Misri - Wikipedia. Name[edit] It has been speculated by scholars whether "Dhul-Nun" was an honorific (laqab) for the mystic rather than his name proper, which is sometimes believed to be Thawbān.[6] As "Dhul-Nun," literally meaning "the one of the fish [or whale]," is another name for the Hebrew prophet Jonah in Islamic tradition, it is sometimes believed that this title was given to Dhul-Nun in commemoration of Jonah.[7]

Za'irajah. Parts 1, 2, 3 and 4. God, with your supreme perfection here begins The Ultimate General Art by Blessed Raymond Lull. Foreword 1. After composing many general arts, I want to explain them more clearly with this, the Ultimate Art, so named because we do not intend to make any other art more general than this one, as we compiled this art from the other arts and added some new explicit material. Human minds are more given to opinions than to science, and as each science has principles different from those of other sciences, the human intellect requires and seeks one general science with its own general principles in which the principles of all other sciences are contained as particulars of a universal that regulates the principles of other sciences so that the intellect can repose in those sciences by really understanding them and banishing all erroneous opinions.

St. Germain (Theosophy) - Wikipedia. There are several "authoritative" biographers who usually do not agree with one another. Albertus Magnus - Wikipedia. Albertus Magnus,[3] O.P. (c. 1200 – November 15, 1280), also known as Saint Albert the Great and Albert of Cologne, was a German Catholic Dominican friar and bishop. Later canonised as a Catholic saint, he was known during his lifetime as Doctor universalis and Doctor expertus and, late in his life, the sobriquet Magnus was appended to his name.[4] Scholars such as James A.