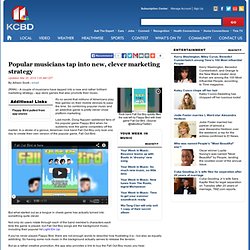 It's no secret that millions of Americans play free games on their mobile devices to pass the time. So combining popular music and an addictive game is pretty clever cross platform marketing. Last month, Dong Nguyen saddened fans of his popular game Flappy Bird when he suddenly took the game completely off the market. In a stroke of a genius, American rock band Fall Out Boy only took one day to create their own version of the popular game, Fall Out Bird. But what started out as a tongue in cheek game has actually turned into something quite clever. Not only do users rotate through each of the band member's characters each time the game is played, but Fall Out Boy songs are the background music, including their popular hit Light Em Up.

But as a rather creative promotion, the app also provides a link to buy the Fall Out Boy music you hear. DID CANADA KILL THE PRESS RELEASE? — Political Communication. Gone with the old-style release are dense blocks of text, long titles in headlines and leads, and the sort of complex, dehumanizing jargon that allows you to speak without saying anything at all. 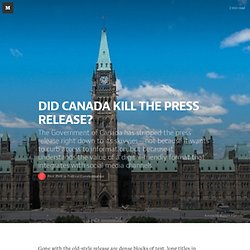 Instead, two or three short, crisp paragraphs now open to key messages, quotations and additional resources—all in a simple to scan, bullet-point format. Critical here is the recognition—and from the Federal Government, no less—that people strapped for time will do what they like with your information, if you can get them to pay attention in the first place. So why not make it easy for them to share your story? Why resist new media, platforms and channels when that’s where your audiences are consuming their news?

Our kudos to the Fed for letting the Internet into its heart, but let’s not forget that people have been tinkering with the traditional press release for years (the Government of Ontario included). Infographics as press releases: 3 beautiful examples. Infographics are all the rage these days. 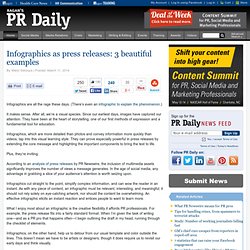 (There’s even an infographic to explain the phenomenon.) It makes sense. PR-Squared – Social Media Marketing and Public Relations: Resources! Throughout my time as a blogger, I’ve published numerous Social Media resources – all of which are offered free of charge, without copyright restrictions (though a tip o’ the hat is always appreciated). 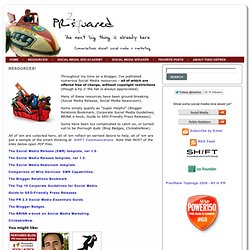 Many of these resources have been ground-breaking (Social Media Release, Social Media Newsroom). Some simply qualify as “Super Helpful” (Blogger Relations Bookmark, Corporate Social Media Guidelines, BRINK e-book, Guide to SEO-Friendly Press Releases). Some have been too complicated to catch on, or turned out to be thorough duds (Blog Badges, ClickableNow). All of ‘em are collected here, all of ‘em reflect an earnest desire to help, all of ‘em are just a sample of the smart thinking at SHIFT Communications.

Note that MOST of the links below open PDF files.

The Long Tail. Coca-Cola Content 2020. Tools. Images. Disruptive Leadership : TED Radio Hour. House of Cards and the rise of the content-on-demand generation. Share this It was always going to happen. 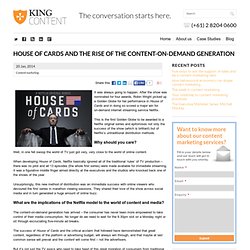 After the show was nominated for four awards, Robin Wright picked up a Golden Globe for her performance in House of Cards and in doing so scored a major win for on-demand internet streaming service Netflix. This is the first Golden Globe to be awarded to a Netflix original series and epitomises not only the success of the show (which is brilliant) but of Netflix’s untraditional distribution methods. Why should you care? Well, in one fell swoop the world of TV just got very, very close to the world of online content. When developing House of Cards, Netflix basically ignored all of the traditional ‘rules’ of TV production – there was no pilot and all 13 episodes (the whole first series) were made available for immediate streaming. Unsurprisingly, this new method of distribution was an immediate success with online viewers who devoured the first series in marathon viewing sessions.

I’d recommend watching the entire speech. Pop Princess PR Smackdown — Culture Club. *Full Disclosure: This blog may or may not have been written while bumping Beyoncé’s new album from start to finish. 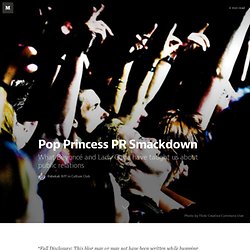 A few weeks ago, reigning pop queen Beyoncé dropped her newest album on the world sans fanfare. Conventional music marketing wisdom would indicate an album release without a marketing campaign is superstar suicide: No anticipation = No sales.

What Is Content PR? Social. Video. The Death of Content Marketing. GyroVoice: The Content Marketing Conflict: Engagement vs. Usefulness. The gyro Ignition Webinar Series will present a complimentary webinar January 16 at 2 p.m. 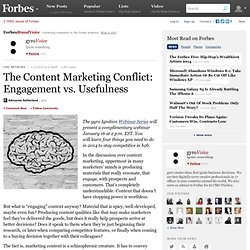 EST. You will learn four things you need to do in 2014 to stay competitive in b2b. In the discussion over content marketing, uppermost in many marketers’ minds is producing materials that really resonate, that engage, with prospects and customers.