Carbon Dioxide and Other Greenhouse Gases

The idea that carbon dioxide may cause significant warming is often traced to Svante Arrhenius.

In his 1895 paper Arrhenius wrote:
“…temperature of the Arctic regions would rise about 8 degrees or 9 degrees Celsius, if the carbonic acid [CO2] increased 2.5 to 3 times its present value."

In a later paper (1906), written in German and less widely circulated, he wrote: “In a similar way, I calculate that a reduction in the amount of CO2 by half, or a gain to twice the amount, would cause a temperature change of – 1.5 degrees C, or + 1.6 degrees C, respectively.”

Regardless, when Arrhenius wrote, the concept of the planet cooling by outgoing infrared radiation was not fully developed. His calculations did not have the benefit of 20th century research on the absorption and re-radiation effects of greenhouse gases together in the atmosphere and individually. It was pure speculation. (SEPP)

Scientists Find CO2 Levels Must TRIPLE To Have An 1800% Smaller Climate Impact Than Clouds Do. By Kenneth Richard on 25. 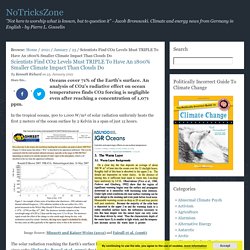 IPCC Made Fatal Errors In Assumptions About CO2 Which Destroy Global Warming Alarm. By Kenneth Richard on 7. 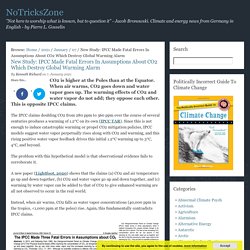 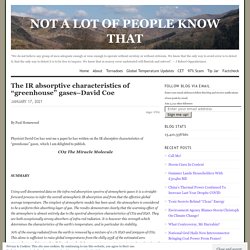 CO2 The Miracle Molecule Using well documented data on the infra-red absorption spectra of atmospheric gases it is a straight-forward process to infer the overall atmospheric IR absorption and from that the effective global average temperature. The simplest of atmospheric models has been used: the atmosphere is considered to be a uniform thin absorbing layer of gas. The results demonstrate clearly that the warming effect of the atmosphere is almost entirely due to the spectral absorption characteristics of CO2 and H2O. 49 NASA Scientists Tell The Truth.

Guest Post by Willis Eschenbach Next time someone tells you that scientists all support the “dangerous climate change from CO2” hypothesis, point out to them that forty-nine former NASA scientists have written an open letter to NASA pointing out that NASA is hyping unsubstantiated and unverified claims about climate … posted without further comment. w. 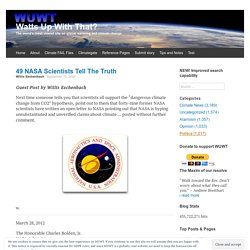 Carbon Dioxide Sources and Sinks. Carbon Cycle. CO2 and Temperature History. CO2 Climate Sensitivity. CAGW Theory. Attribution of Warming due to Human Emissions. Climate Models. CO2 and Cooling. CO2 and Pollutant Levels during COVID-19 Shutdown. Here’s Looking at You, CO2. Raymond of RiC-Communications studio commented on a recent post and made an offer to share here some graphics on CO2 for improving public awareness. 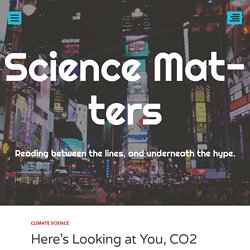 This post presents the eleven charts he has produced so far. I find them straightforward and useful, and appreciate his excellent work on this. Project title is link to RiC-Communications. Greenhouse effect: “How a cold atmosphere can warm the Earth’s surface” Dr. 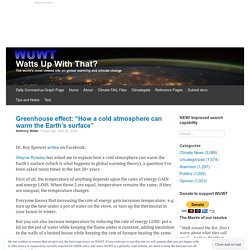 Roy Spencer writes on Facebook: Wayne Rowley has asked me to explain how a cold atmosphere can warm the Earth’s surface (which is what happens in global warming theory), a question I’ve been asked many times in the last 20+ years. Scientists Cite Uncertainty, Error, Model Deficiencies To Affirm A Non-Detectable Human Climate Influence. By Kenneth Richard on 21. 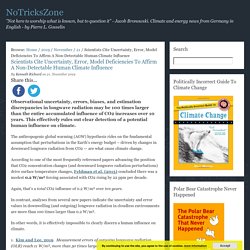 November 2019 Observational uncertainty, errors, biases, and estimation discrepancies in longwave radiation may be 100 times larger than the entire accumulated influence of CO2 increases over 10 years. This effectively rules out clear detection of a potential human influence on climate. The anthropogenic global warming (AGW) hypothesis rides on the fundamental assumption that perturbations in the Earth’s energy budget – driven by changes in downward longwave radiation from CO2 — are what cause climate change. According to one of the most frequently referenced papers advancing the position that CO2 concentration changes (and downward longwave radiation perturbations) drive surface temperature changes, Feldman et al. (2015) concluded there was a modest 0.2 W/m² forcing associated with CO2 rising by 22 ppm per decade. 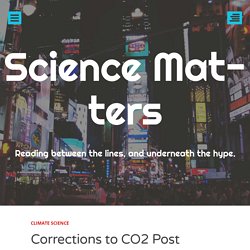 I discovered math errors that invalidated the main conclusion. I apologize for not seeing the problem before posting. Analysis of a carbon forecast gone wrong: the case of the IPCC FAR. By Alberto Zaragoza Comendador The IPCC’s First Assessment Report (FAR) made forecasts or projections of future concentrations of carbon dioxide that turned out to be too high. 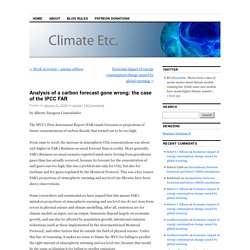 From 1990 to 2018, the increase in atmospheric CO2 concentrations was about 25% higher in FAR’s Business-as-usual forecast than in reality. More generally, FAR’s Business-as-usual scenario expected much more forcing from greenhouse gases than has actually occurred, because its forecast for the concentration of said gases was too high; this was a problem not only for CO2, but also for methane and for gases regulated by the Montreal Protocol. 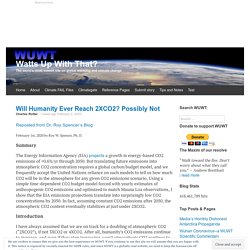 Roy Spencer’s Blog February 1st, 2020 by Roy W. Spencer, Ph. D. Summary The Energy Information Agency (EIA) projects a growth in energy-based CO2 emissions of +0.6%/yr through 2050. Greta’s Spurious “Carbon Budget” Many have noticed that recent speeches written for child activist Greta Thunberg are basing the climate “emergency” on the rapidly closing “carbon budget”. This post aims to summarize how alarmists define the so-called carbon budget, and why their claims to its authority are spurious. In the text and at the bottom are links to websites where readers can access both the consensus science papers and the analyses showing the flaws in the carbon budget notion. Excerpts are in italics with my bolds. Arrhenius 1906, final. Arrhenius – Earth To Boil. 23 Oct 1902, Page 1 – The News-Herald at Newspapers.com And 115 years later, Stephen Hawking was parroting the same nonsense. Stephen Hawking: Earth Could Turn Into Hothouse Planet Like Venus | Live Science Arrhenius made a fundamental error in that he didn’t recognize H2O is a greenhouse gas.

Knut Angstrom pointed this out in 1901, and showed experimentally that adding CO2 has very little impact on climate. mwr-029-06-0268a.pdf Rasool and Schneider confirmed this in 1971. rasool_schneider_1971.pdf I generated this graph using the RRTM-LW model, which shows how little impact CO2 and CH4 have on earth’s radiative balance. The Mathematics of Carbon Dioxide, Part 1. This is a guest essay by Mike Jonas, part 1 of 4 Introduction The aim of this article is to provide simple mathematical formulae that can be used to calculate the carbon dioxide (CO2) contribution to global temperature change, as represented in the computer climate models. This article is the first in a series of four articles.

Forcing and Burning in Coal Country. Eleven facts you MUST know to avoid being deceived by the AGW "science" - edberry.com. By Camille Veyres, Porto Conference 2019. How to Deceive with Statistics: Distortions Due to Diminutive Denominators. There are several indices being cited these days that get people's attention because of the big numbers displayed. But the reality is that those particular big numbers come entirely from having very small denominators when calculating a ratio. Climate Debate Is On. Senator Malcolm Roberts: ON CLIMATE, CSIRO LACKS EMPIRICAL PROOF H/t Jo Nova Finally, a public airing of empirical flaws in consensus climate science. Senator Malcolm Roberts is doing Australia and the entire world a service by applying critical intelligence to IPCC climate science as espoused by CSIRO, Australia’s climate agency. Ph.D. Climate Scientist: Modern Warming Natural…CO2 Changes Affect Climate ‘Weakly At Most’ Planetary Warming: Back to Basics.

Claim: Real-World Spectral Measurements Show The ‘Greenhouse Theory Is Wrong’ – ALL Gases Are GHGs. Cut Emissions? Who, Me? CO2: "WHY ME?" (Rocket Scientist's Journal) Reminder: How The IPCC And Climate Alarmists Hid The Good News On Global Warming. The Good, the Bad and the Null Hypothesis. On the Existence of a Tropical Hot Spot and The Validity of the US EPA's CO2 Endangerment Finding. “Even doubling or tripling the amount of CO2′ will have ‘little impact’ on temps” Carbon Dioxide is not the Primary Cause of Global Warming: The Future Cannot Cause the Past. New Literature Strongly Suggests CO2 Residence Time In The Atmosphere Is Exaggerated! The London Climate Change Conference 2016. Ned Nikolov & Karl Zeller. Celestial Climate Driver: A Perspective from Four Billion Years of the Carbon Cycle. Feedback on Feedbacks. Questions on the rate of global carbon dioxide increase.