Beyond Orwellian Nightmares and Neoliberal Authoritarianism. (Image: Jared Rodriguez / Truthout)Those who fight against neoliberalism must not settle for reforming a system that is as broken as it is dangerous. 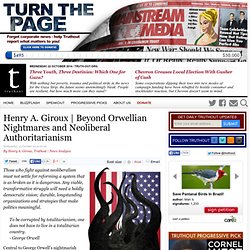 Any viable, transformative struggle will need a boldly democratic vision; durable, longstanding organizations and strategies that make politics meaningful. To be corrupted by totalitarianism, one does not have to live in a totalitarian country.- George Orwell Central to George Orwell's nightmarish vision of a totalitarian society was a government so powerful that it not only dominated all of the major institutions in a society, but it also was quite adept at making invisible its inner workings of power. To read more articles by Henry A. Giroux and other authors in the Public Intellectual Project, click here. The American Deep State, or what Colonel Fletcher Prouty called the Secret Team, is a structural layer of political intermediaries: non-governmental organizations (e.g. Packer - Two Models of the Criminal Process. 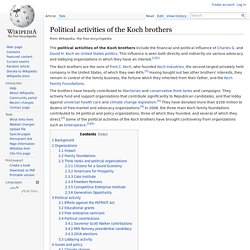 Koch on United States politics. This influence is seen both directly and indirectly via various advocacy and lobbying organizations in which they have an interest.[1][2] The Koch brothers are the sons of Fred C. Koch, who founded Koch Industries, the second-largest privately held company in the United States, of which they own 84%.[3] Having bought out two other brothers' interests, they remain in control of the family business, the fortune which they inherited from their father, and the Koch Family Foundations. The brothers have heavily contributed to libertarian and conservative think tanks and campaigns. Background[edit] David H. David Koch has voiced support for gay marriage and U.S. military withdrawal from the Middle East. Interested in maintaining their privacy, they prefer to spend on donations to non-profit groups who do not disclose donors.[17] Impact[edit] 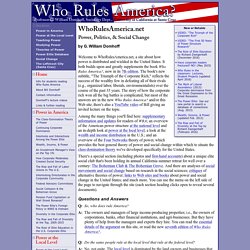 William Domhoff Welcome to WhoRulesAmerica.net, a site about how power is distributed and wielded in the United States. It both builds upon and greatly supplements the book Who Rules America? How the CIA made Google. In the wake of the Charlie Hebdo attacks in Paris, western governments are moving fast to legitimize expanded powers of mass surveillance and controls on the internet, all in the name of fighting terrorism. 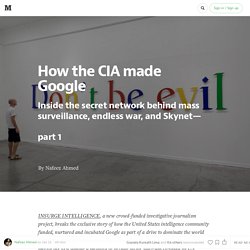 US and European politicians have called to protect NSA-style snooping, and to advance the capacity to intrude on internet privacy by outlawing encryption. One idea is to establish a telecoms partnership that would unilaterally delete content deemed to “fuel hatred and violence” in situations considered “appropriate.” Heated discussions are going on at government and parliamentary level to explore cracking down on lawyer-client confidentiality. Americas Richest Presidents. Gangster Bankers: Too Big to Jail. The United States of ALEC. BILL MOYERS: This week on Moyers & Company… Privatizing America one statehouse at a time. 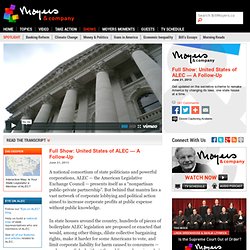 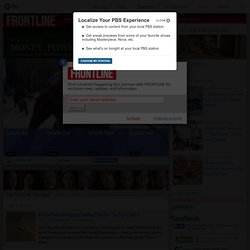 May 1, 2012, 8:44 pm ET · by Azmat Khan The Obama administration arrived in Washington in early 2009 facing the worst financial crisis since the Great Depression — and an American public outraged by bailouts for the financial institutions that had gotten them there. Pioneer Behind Credit Derivatives is Leaving JPMorgan April 3, 2014, 4:16 pm ET · by Jason M. Breslow Blythe Masters, who helped develop one of the most notorious financial instruments of the 2008 financial crisis, has announced plans to leave JPMorgan Chase. The Financial Crisis Five Years Later — How It Changed Us September 10, 2013, 10:50 am ET · by Jason M. It has been five years since the financial crisis began, and though the economy is on the mend, the legacy of the crash still reverberates.

JPMorgan To Lose $842 Million In Toxic Ala. June 5, 2013, 3:22 pm ET · by Jason M. Financial Regulators Turn Their Focus To Non-Banks June 4, 2013, 3:24 pm ET · by Jason M. Casino Jack and the United States of Money Trailer. Reproductive Justice Virtual Library - BerkeleyLaw. CRRJ Reproductive Justice Virtual Library Now, there's a simple way to begin or deepen your understanding of reproductive justice You can introduce yourself to RJ or deepen your understanding of it right here. 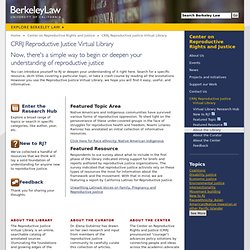 Search for a specific resource, skim titles covering a particular topic, or take a crash course by reading all the annotations. However you use the Reproductive Justice Virtual Library, we hope you will find it easy, useful, and informative. Enter the Research Hub Explore a broad range of topics or search in specific categories, like author, year, etc. The Politics of Heroin in Southeast Asia by A. McCoy. Welcome - OpenSpending. Crime and Deviance. USA: Money in Politics.