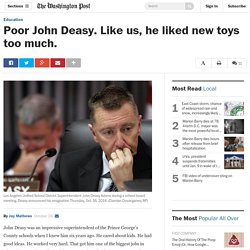 Deasy announced his resignation Thursday, Oct. 16, 2014. Education of Washington's students should come before corporate welfare. On Wednesday, the Washington State Supreme Court will face off with the Legislature over fully funding public education under the 2012 McCleary decision. 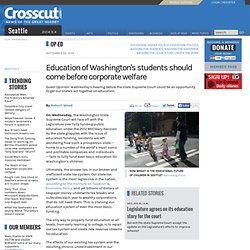 As the state grapples with the issue of education funding, residents are left wondering how such a prosperous state -- home to a number of the world’s most iconic and profitable companies and individuals — fails to fully fund even basic education for Washington’s children. Ultimately, the answer lies in our broken and inefficient state tax system. Our state tax system is the most regressive in the nation, according to the Institute on Taxation & Economic Policy, and yet billions of dollars of taxpayer money underwrite tax breaks and subsidies each year to wealthy corporations that do not need them. 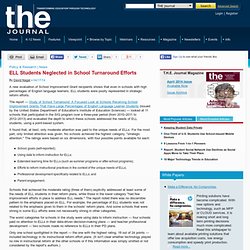 The report — Study of School Turnaround: A Focused Look at Schools Receiving School Improvement Grants That Have Large Percentages of English Language Learner Students (issued by the United States Department of Education's Institute of Education Sciences) — looked at 11 schools that participated in the SIG program over a three-year period (from 2010–2011 to 2012–2013) and evaluated the depth to which these schools addressed the needs of ELL students, using a point-based system. Top 5 Myths and Lies About Teachers and Their Profession. ‘If only American teachers were smarter…’ ( Jonathon Rosen for The Washington Post ) Teachers. 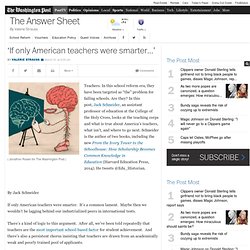 In this school reform era, they have been targeted as “the” problem for failing schools. Are they? In this post, Jack Schneider, an assistant professor of education at the College of the Holy Cross, looks at the teaching corps and what is true about America’s teachers, what isn’t, and where to go next. Schneider is the author of two books, including the new From the Ivory Tower to the Schoolhouse: How Scholarship Becomes Common Knowledge in Education (Harvard Education Press, 2014). Report: Teachers Want More Time, Resources To Prepare for Common Core. Standards & Assessment | News Report: Teachers Want More Time, Resources To Prepare for Common Core While more teachers today feel confident about their ability to teach Common Core State Standards, more than three-quarters of them reported they need more time to find teaching materials and develop lesson plans, according to a new survey of more than 20,000 teachers from the Bill & Melinda Gates Foundation and Scholastic. 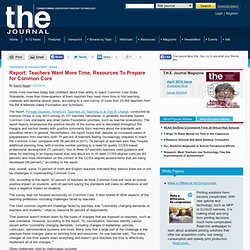 The report, Primary Sources: America's Teachers on Teaching in an Era of Change, conducted by Harrison Group in July 2013 among 20,157 teachers nationwide, is generally favorable toward Common Core standards and other Gates Foundation priorities, such as teacher evaluations. The report heavily emphasizes the positive results of the survey and is decorated throughout the margins and section breaks with positive comments from teachers about the standards and education reform in general. Bad Education. 10 NEW Education Infographics We Love! EduTrends Friday. To help us grow our information network, and keep collecting the best content and new ideas for EDUcators, please LIKE US, share on Facebook, Tweet us, and scroll to the end of this post to sign up for alerts; we’ll let you know when new content becomes available. 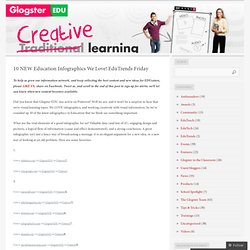 Did you know that Glogster EDU was active on Pinterest? Well we are, and it won’t be a surprise to hear that we’re visual learning types. OETC Professional Learning Communities. IssueLab. Education Evolving. IDEA: Institute for Democratic Education in America. Getting A Job Is Not The Purpose Of School. The Purpose Of School by Terry Heick The idea of “work” is present in most modern educational discussion almost entirely under the terms “career readiness.” 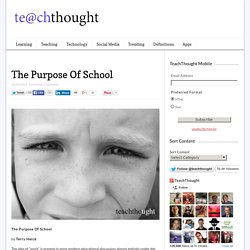 This itself is an interesting failure, as it implies that the purpose of schooling is to prepare a person for “a job.” How education reform drives gentrification. Stephanie Yao Long/The Oregonian/Landov Public school teachers in Portland, Ore., and their students are doing a victory lap. 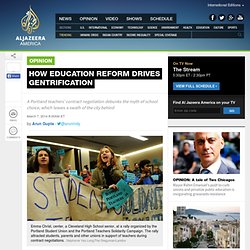 Nearly a year after unveiling a contract proposal that would have put the squeeze on the 2,900-member Portland Association of Teachers (PAT), the Portland School Board on March 3 approved a contract that acceded to virtually every demand from the teachers’ union. The board was acting as a stalking horse for corporate attacks on unions and public education nationwide. It initially wanted to saddle teachers with higher health care costs, fewer retirement benefits, more students and a greater workload in a city where 40 percent of teachers already work more than 50 hours a week (PDF). The board also demanded expansive management rights (PDF) and allegedly wished to link teacher evaluation more closely to standardized testing. 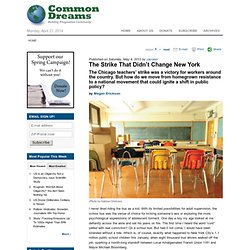 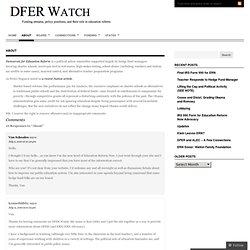 As Pedro Noguera noted in a recent Nation article: Market-based reforms like performance pay for teachers, the excessive emphasis on charter schools as alternatives to traditional public schools and the distribution of federal funds—once treated as entitlements to compensate for poverty—through competitive grants all represent a disturbing continuity with the policies of the past. The Obama administration gets some credit for not ignoring education despite being preoccupied with several formidable challenges.