DEFCON 20: Can You Track Me Now? Government And Corporate Survei

Christopher Soghoian. SOGHOIAN v. DEPARTMENT OF JUSTICE. DEFCON 20: Can You Track Me Now? Government And Corporate Surveillance Of Mobile Geo-Location Data. The ‘Wiretappers Ball’ Threatens Everyone’s Internet Privacy. It’s unlikely you’ve ever heard of the surveillance-industry conferences, commonly referred to as ‘the wiretappers ball’ but the products hawked at these events, and whose buying those products is concerning. 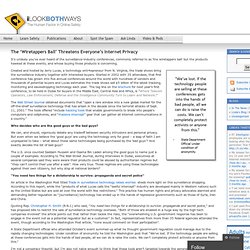 Created and hosted by Jerry Lucas, a technology entr4epreneur from N. Virginia, the trade shows bring the surveillance industry together with interested buyers. Started in 2002 with 35 attendees, that first conference has grown into five annual conferences around the world with hundreds of vendors and thousands of potential buyers and Lucas estimates the trade shows sell $5 billion of the latest tracking, monitoring and eavesdropping technology each year.

The tag line on the brochure for next year’s first conference, to be held in Dubai for buyers in the Middle East, Central Asia and Africa, is “Where Telecom Operators, Law Enforcement, Defense and the Intelligence Community Turn to Learn and Network.” Who decides who are the good guys or the bad guys? Quoting Rep. Linda Like this: Open Society Foundations. One of the aims of the OSF is the development of civil society organizations (e.g., charities and community groups) to encourage participation in democracy and society.[1] The name is inspired by Karl Popper's 1945 book The Open Society and Its Enemies.[2] History[edit] Initiatives[edit] Related initiatives include the Open Society Initiative for West Africa (OSIWA) and the Open Society Initiative for Southern Africa (OSISA). 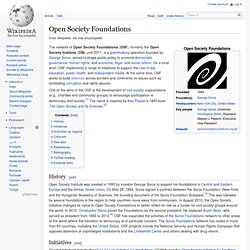 Recent efforts have included those that have met with controversy, including an effort in the African Great Lakes region aimed at spreading human rights awareness among prostitutes in Uganda and other nations in the area. Activities by regions[edit] According to the 2009 OSF expenditures report,[12] Africa region (outside of South Africa) was the key area of funded activities: about $51,000,000 were spent on civil society support, human rights, education, justice, media, public health, transparency, and other activities there. Criticism[edit] See also[edit] Christopher Soghoian. Christopher Soghoian is a Washington, DC based privacy researcher and activist. 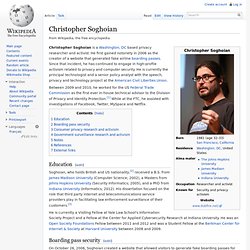 He first gained notoriety in 2006 as the creator of a website that generated fake airline boarding passes. Since that incident, he has continued to engage in high-profile activism related to privacy and computer security. He is currently the principal technologist and a senior policy analyst with the speech, privacy and technology project at the American Civil Liberties Union. Community of interest. N.S.A. Gathers Data on Social Connections of U.S. Citizens. The spy agency began allowing the analysis of phone call and e-mail logs in November 2010 to examine Americans’ networks of associations for foreign intelligence purposes after N.S.A. officials lifted restrictions on the practice, according to documents provided by Edward J. 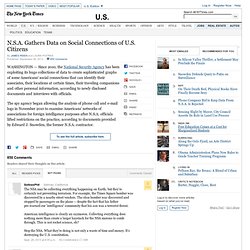 Snowden, the former N.S.A. contractor. The policy shift was intended to help the agency “discover and track” connections between intelligence targets overseas and people in the United States, according to an N.S.A. memorandum from January 2011. The agency was authorized to conduct “large-scale graph analysis on very large sets of communications metadata without having to check foreignness” of every e-mail address, phone number or other identifier, the document said. Because of concerns about infringing on the privacy of American citizens, the computer analysis of such data had previously been permitted only for foreigners. “All of N.S.A.’s work has a foreign intelligence purpose,” the spokeswoman added. The Wide Scope Of The NSA's Secret Spying Program. Joins Twitter in Standing Up For User. We took a stand for Twitter users Wednesday, and in an amicus brief (PDF) urged a New York City judge to reconsider his decision authorizing a broad subpoena to Twitter that seriously threatens the First Amendment and privacy rights of everyone on the Internet. 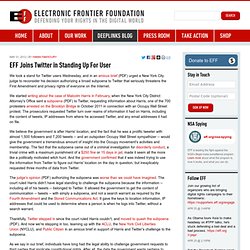 We started writing about the case of Malcolm Harris in February, when the New York City District Attorney's Office sent a subpoena (PDF) to Twitter, requesting information about Harris, one of the 700 protesters arrested on the Brooklyn Bridge in October 2011 in connection with an Occupy Wall Street protest. The prosecutors requested Twitter turn over reams of information it had on Harris, including the content of tweets, IP addresses from where he accessed Twitter, and any email addresses it had on file. The judge's opinion (PDF) authorizing the subpoena was worse than we could have imagined. The Fourth Amendment. The Third Party Dotrine. Metadata (Information Systems) DEF CON 20, 2012.