PARASITES & VECTORS 03/11/21 Comparison of trapping methods for use in surveys for potential Culicoides vectors of orbiviruses. Virol J. 2017 Jun 8;14(1):105. Isolation of Tibet orbivirus from Culicoides and associated infections in livestock in Yunnan, China. The parameters recognized by the International Committee on Taxonomy of Viruses for the polythetic definition of individual Orbivirus species include: the reassortment of genome segments; genome segment migration patterns shown by 1% agarose gel electrophoresis; conserved terminal nt sequences; serological cross-reactions; comparison of homologous genome segments or proteins by sequence analysis or cross-hybridization; host and vector ranges; and the nature of clinical signs induced by infection [19, 20]. 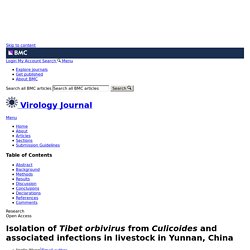 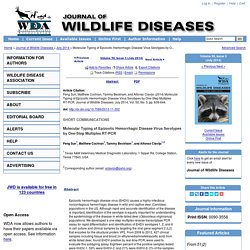 This method had been used to identify EHDV serotypes from 427 EHDV-positive samples during 2009–12. A one-step multiplex RT-PCR assay was performed using a Qiagen OneStep RT-PCR kit (no. 21012; Qiagen, Valencia, California, USA); 10 pmol of each primer and 5 µL of template RNA in a 25 µL final reaction volume were used for RT-PCR reaction. JOURNAL OF WILDLIFE DISEASES - JULY 2014 - Epizootic Hemorrhagic Disease in Alberta, Canada. From 5–16 September 2013, a cluster of at least 50 dead deer (primarily white-tailed deer) and three dead antelope were reported to Fish and Wildlife offices in southern Alberta. 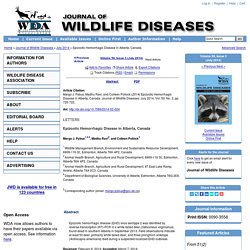 All carcasses were in the same geographic area within 30–50 km north of the US border and were observed by the public during agricultural harvest activities, often near water reservoirs in farmed fields. Given the unusual number of carcasses, proximity to water, location near the US border, time of year, and an ongoing disease outbreak in Montana and North Dakota, EHD was considered a differential diagnosis. Local Fish and Wildlife staff was asked to record all reports of dead deer or antelope and investigate when possible. Carcasses generally were found in advanced decomposition. One dead white-tailed deer and an antelope were submitted for postmortem examination at the Alberta Agriculture and Rural Development diagnostic laboratory in Lethbridge. SAGE JOURNALS 12/10/15 Host and Potential Vector Susceptibility to an Emerging Orbivirus in the United States. 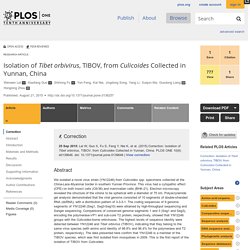 This virus had a cytopathic effect (CPE) on both insect cells (C6/36) and mammalian cells (BHK-21). Electron microscopy revealed the structure of the virions to be spherical with a diameter of 75 nm. Journal of the South African Veterinary Association - 2012 - History of Orbivirus research in South Africa. Vector-Borne and Zoonotic Diseases 18/06/15 A Review of Knowledge Gaps and Tools for Orbivirus Research. Rev. Sci. Tech. Off. Int. Epiz., 2015, 34 (2), 353-361 Zoonotic and emerging orbivirus infections. Virol Sin. 2016 Dec 30. A novel mosquito-borne reassortant orbivirus isolated from Xishuangbanna, China. VETERINARY RESEARCH 27/01/10 Re-emergence of Bluetongue, African horse sickness, and other Orbivirus diseases. 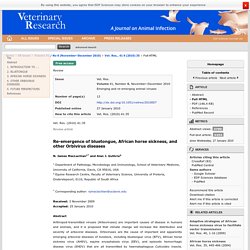 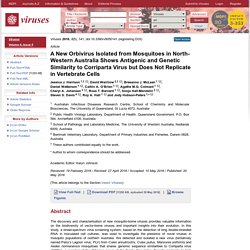 A New Orbivirus Isolated from Mosquitoes in North-Western Australia Shows Antigenic and Genetic Similarity to Corriparta Virus but Does Not Replicate in Vertebrate Cells. Viruses 2016, 8, 141. View more citation formats. JOURNAL OF THE SOUTH AFRICAN VETERINARY ASSOCIATION - 2012 - History of Orbivirus research in South Africa. In the early colonial history of South Africa, horses played an important role, both in general transportation and in military operations. 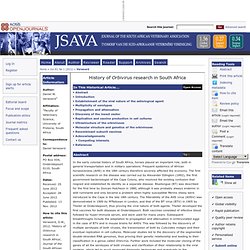 Frequent epidemics of African horsesickness (AHS) in the 18th century therefore severely affected the economy. The first scientific research on the disease was carried out by Alexander Edington (1892), the first government bacteriologist of the Cape Colony, who resolved the existing confusion that reigned and established its identity as a separate disease. Bluetongue (BT) was described for the first time by Duncan Hutcheon in 1880, although it was probably always endemic in wild ruminants and only became a problem when highly susceptible Merino sheep were introduced to the Cape in the late 18th century. 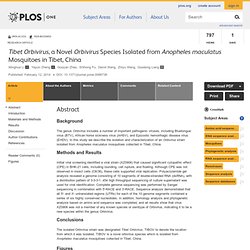 Orbiviruses, such as those that cause bluetongue (BT) and epizootic hemorrhagic disease (EHD) have caused growing concerns among veterinarians and livestock producers. 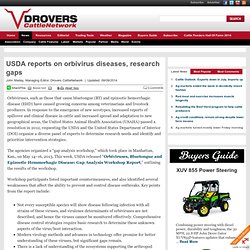 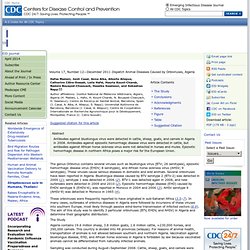 The type species is Bluetongue virus. The three economically most important orbiviruses are Bluetongue virus, African horse sickness virus and Epizootic hemorrhagic disease virus all of which are transmitted by Culicoides species. Virus Particles[edit] The virons are non-enveloped particles that are between 70-80 nm in diameter. The virus particles are spherical in appearance and have icosahedral symmetry.