CDC Foundation accepts millions of dollars from vaccine manufacturers – NaturalNews.com. (Natural News) The Centers For Disease Control often places a disclaimer on their recommendations that reads, “CDC, our planners, and our content experts wish to disclose they have no financial interests or other relationships with the manufacturers of commercial products . . . 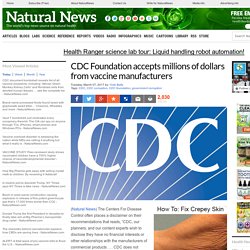 CDC does not accept commercial support.” This would lead many to believe that the CDC is not prey to industry whimsy and does not receive money from the very companies we the people try so desperately to protect ourselves against. City council members across America “on the take” from biosludge operators to keep poisoning their own local soils with toxic sludge – NaturalNews.com. (Natural News) The details behind why the Environmental Protection Agency (EPA) decided to fire Dr. 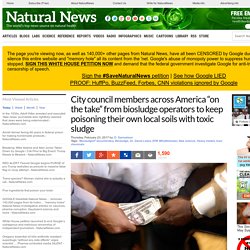 David Lewis, a brilliant microbiologist who blew the whistle on biosludge, is a familiar story. The EPA decided they would rather create fake data in order to “help” states, counties, and municipalities rid themselves of biological waste. Amish farmer facing 68 years in federal prison for making homemade products – NaturalNews.com. (Natural News) When most people imagine their golden years, they don’t envision spending the last decades of their life in a federal prison, but for 56-year-old Samuel Girod, that threat is very real — thanks to the FDA. 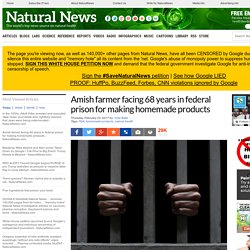 Girod is facing 68 years in jail for the simple crime of creating his own all-natural homemade products. Father to 12 and grandfather to 25, Girod has been facing a 12-count indictment since 2015. Use of Paraquat in US Increases While 32 Countries Banned It. Important Facts About Genetically Engineered Foods You’ll Never Hear From Mainstream Media – Collective Evolution. CDC Losing 3 Winnable Health Battles. December 07, 2016 | 1,301 views Email this article to a friend In a rare show of contrition, the Centers for Disease Control and Prevention (CDC) conceded they have failed to complete several of the most basic tasks in their charge. 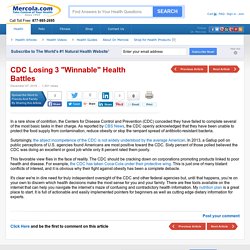 As reported by CBS News, the CDC openly acknowledged that they have been unable to protect the food supply from contamination, reduce obesity or stop the rampant spread of antibiotic-resistant bacteria. Surprisingly, the abject incompetence of the CDC is not widely understood by the average American. In 2013, a Gallup poll on public perceptions of U.S. agencies found Americans are most positive toward the CDC. This favorable view flies in the face of reality. It's clear we're in dire need for truly independent oversight of the CDC and other federal agencies but, until that happens, you’re on your own to discern which health decisions make the most sense for you and your family.

Will the FTC End Homeopathy? By Dr. 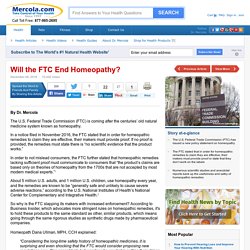 Mercola The U.S. Federal Trade Commission (FTC) is coming after the centuries’ old natural medicine system known as homeopathy. Which is worse: the NSA or the FDA? Risk for developing Alzheimer’s disease DOUBLES in men receiving common treatment for prostate cancer. The medical profession is being bought by the pharmaceutical industry. Your doctor may be killing you. FDA openly admits it doesn't know what defines 'healthy' in food products containing good fats. How Fascism Creates Science-Biased Medicine in Federal Policies. By Dr. 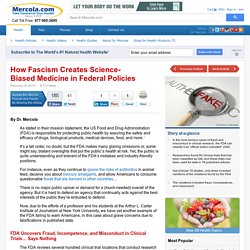 Mercola As stated in their mission statement, the US Food and Drug Administration (FDA) is responsible for protecting public health by assuring the safety and efficacy of drugs, biological products, medical devices, food, and more.1It’s a tall order, no doubt, but the FDA makes many glaring omissions or, some might say, blatant oversights that put the public’s health at risk.

Yet, the public is quite understanding and tolerant of the FDA’s mistakes and industry-friendly positions.For instance, even as they continue to ignore the risks of antibiotics in animal feed, deceive you about mercury amalgams, and allow Americans to consume questionable foods that are banned in other countries… There is no major public uproar or demand for a (much-needed) overall of the agency. In the Wake of CDC Anthrax Release, More Errors Are Discovered. By Dr. 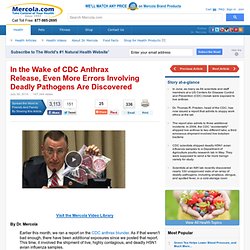 Mercola Earlier this month, we ran a report on the CDC anthrax blunder. As if that weren't bad enough, there have been additional exposures since we posted that report. This time, it involved the shipment of live, highly contagious, and deadly H5N1 avian influenza samples. As previously reported, as many as 841 scientists and staff members at a US Centers for Disease Control and Prevention (CDC) biolab were exposed to live anthrax in June.

The Old Adage Holds True: If You Fail to Plan, You're Planning to Fail... According to the CDC's internal investigation, senior staff members at the receiving facility had not created a written plan for the researchers to follow when studying the deadly pathogen. "It is ironic that the institution that sets US standards for safety and security of work with human pathogens fails to meet its own standards. The report also admits to two additional anthrax incidents, both of which occurred in 2006. The bad news doesn't end there, I'm afraid.