Addiction within an Aristotelian Philoso. How psychology makes itself true or false. John Stossel - The Science Around Male Brains vs. Female Brains. Won't Allow You to Hear These 6 Words From Former Transgender Identifying Person Walt Heyer. The Empirical Case against “Conversion-Therapy” Bans - Public Discourse. Currently a bill to ban “conversion therapy” is being considered in the Canadian Senate (Bill C-8), as well as in multiple states in the US. 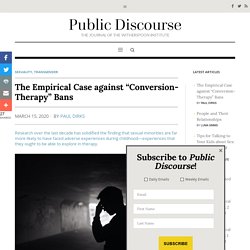 Unfortunately, in most cases there is tremendous ambiguity about which practices and services are being prohibited which obfuscates a multitude of problems: the endangerment of previously established legal rights for individuals to choose health treatments, the removal of the professional autonomy of doctors in providing treatment according to their expertise, the question of whether “sexual orientation” includes pedophilia, and the controversy surrounding medical transition for gender identity.

Beneath The Replication Crisis – Society In Mind. “Psychologists are simply, on an absolute scale, dullards... 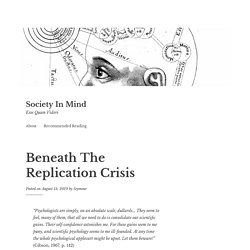 They seem to feel, many of them, that all we need to do is consolidate our scientific gains. Their self-confidence astonishes me. For these gains seem to me puny, and scientific psychology seems to me ill-founded. Paper Says Some Psychiatric Diagnoses “Scientifically Meaningless” – William M. Briggs. The title is an understatement: Heterogeneity in psychiatric diagnostic classification. 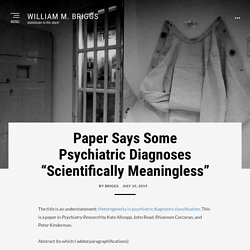 This is a paper in Psychiatry Research by Kate Allsopp, John Read, Rhiannon Corcoran, and Peter Kinderman. Abstract (to which I added paragraphifications): The theory and practice of psychiatric diagnosis are central yet contentious. This paper examines the heterogeneous nature of categories within the DSM-5, how this heterogeneity is expressed across diagnostic criteria, and its consequences for clinicians, clients, and the diagnostic model. Selected chapters of the DSM-5 were thematically analysed: schizophrenia spectrum and other psychotic disorders; bipolar and related disorders; depressive disorders; anxiety disorders; and trauma- and stressor-related disorders. Many social psychologists are impeded by their ideological aversion to evolutionary psychology. By Christian Jarrett A new survey of beliefs held by social psychologists (335 mostly US-based members of the Society of Experimental Social Psychology) has confirmed previous reports that the field is overwhelmingly populated by researchers of a left-wing, liberal bent. 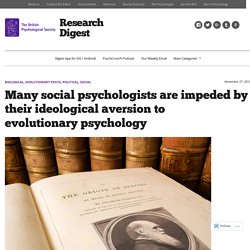 What’s more, David Buss and William von Hippel – the evolutionary psychologists who conducted and analysed the survey – say their findings, published open-access in Archives of Scientific Psychology, suggest that many of these social psychologists are opposed, for ideological reasons, to insights rooted in evolutionary psychology and that this is impeding them from developing a “proper science of social psychology”.

10 of The Most Counter-Intuitive Psychology Findings Ever Published. By Christian Jarrett One of the most annoying things you can say to a psychologist is: “Isn’t it all just common sense?”. 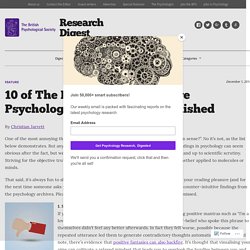 No it’s not, as the list below demonstrates. Rational and Irrational Thought: The Thinking That IQ Tests Miss. No doubt you know several folks with perfectly respectable IQs who repeatedly make poor decisions. 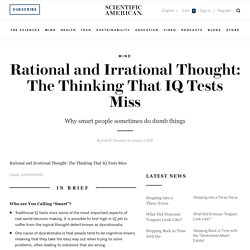 The behavior of such people tells us that we are missing something important by treating intelligence as if it encompassed all cognitive abilities. I coined the term “dysrationalia” (analogous to “dyslexia”), meaning the inability to think and behave rationally despite having adequate intelligence, to draw attention to a large domain of cognitive life that intelligence tests fail to assess. How School Shootings Spread The New Yorker. Sex differences in human brain structure are already apparent at one month of age. By Alex Fradera On average, men and women differ psychologically in small but reliable ways, such as in personality, interests, and cognitive performance, but the basis of these differences is up for debate. 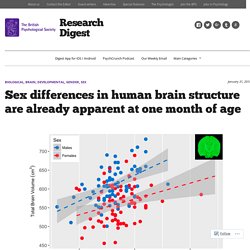 Are they innate or due to how we’re socialised? Neuroscientists look for traction on this question by studying sex differences in the brain, premised on the idea that these might contribute to the observed psychological differences. However, studying the brains of adults, or even teenagers, still leads to spinning wheels, because culturally produced differences will show up in the brain too. But how about one-month old infants, the subjects of a paper published in the journal Brain Structure and Function? The University of Wisconsin-Madison team led by Douglas Dean III recruited 149 expectant mothers who brought in their infants – 77 girls and 72 boys – for brain scanning one month after giving birth. 8 Ways To Identify A Liar That Are Used By Pros. How detectives and intelligence officers can tell if someone is lying. 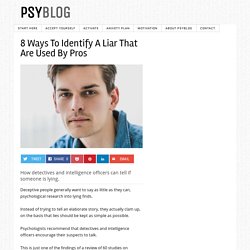 Deceptive people generally want to say as little as they can, psychological research into lying finds. Instead of trying to tell an elaborate story, they actually clam up, on the basis that lies should be kept as simple as possible. Psychologists recommend that detectives and intelligence officers encourage their suspects to talk. This is just one of the findings of a review of 60 studies on deception carried out by Professor R. A Review and Critique of Research on Same Sex Parenting and Adoption. Corrupting cooperation and how anti-corruption strategies may backfire. New “bribery game” shows that sometimes, transparency makes things worse – Ars Technica. In many developing countries, the struggle for economic growth is set back by rampant corruption. 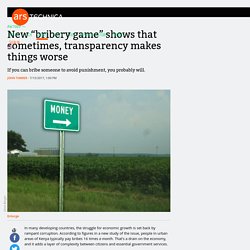 According to figures in a new study of the issue, people in urban areas of Kenya typically pay bribes 16 times a month. Growing Pains. Problems with Puberty Suppression in Treating Gender Dysphoria Paul W. 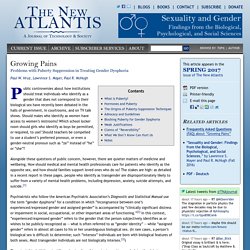 Part 1: Stability of same-sex parent relationships Importance of the issue Kurdek (2005) noted that “perhaps the most important ‘bottom-line’ question asked about gay and lesbian couples is whether their relationships last” (p. 252). Parental stability is an important issue because “children whose parents have divorced or separated show poorer psychological adjustment than children whose fathers have died …” (MacCallum & Golombok, 2004, p. 1407). Julius presents at the London Conference on Intelligence 2016. Sexuality and Gender The New Atlantis 8 19 2016. Sexual orientation and gender identity: what does the science say? Washington D.C., Aug 27, 2016 / 07:09 am (CNA/EWTN News).- For most young people who experience feelings of gender dysphoria, the experience is in fact temporary, and a non-heterosexual orientation is not as fixed as sometimes claimed, a new overview of the relevant research says. “Only a minority of children who experience cross-gender identification will continue to do so into adolescence or adulthood,” said the report, published in The New Atlantis Journal.

As many as 80 percent of men who reported same-sex attraction as adolescents no longer do so as adults. There were “similar but less striking” results for women. The idea of innate sexual orientation is “not supported by scientific evidence,” the report said. Titled “Sexuality and Gender: Findings from the Biological, Psychological, and Social Sciences,” the report reviews various research studies to examine claims about sexuality and gender.

The conversation happening across the room, the alarmingly aggressive typing habits of a nearby colleague, the siren wailing past your office window: oh, for the ability to tune out distractions like these in order to focus 100 percent of your cognitive powers on the task in front of you. The syndemic of AIDS and STDS among MSM. Fatal Flaws in that Religion and Generosity Study. A recent study, headed up by Jean Decety, has been used to suggest that secular individuals are more generous and moral than religious individuals. Learn the Six Key Principles of Persuasion with This Video. Deutschland über alles, dann unter allen? Some Rules of Language are Wired in the Brain. Have criminologists tampered with the crime scene? Does culture cultivate, or do you need a good plough? Social psychology textbooks ignore all modern criticisms of Milgram's "obedience experiments" Some classic psychology experiments, known and discussed far beyond the discipline, have become modern-day myths.

1-s2.0-S016028961500077X-main.pdf. Young children don't categorise mixed-race people the same way adults do. Migrant competence. How Working Moms Can Make the Most of Their Time. Racial brain differences. How to Help Those Who Don't Identify with their Sex. How a New Father's Brain Changes. The Importance of Fathers (According to Science)