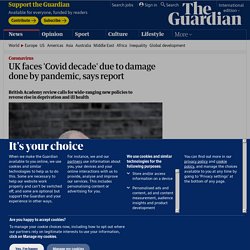 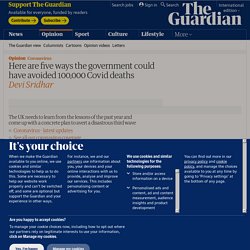 Fauci on What Working for Trump Was Really Like. When did you first realize things were going wrong between you and President Trump? 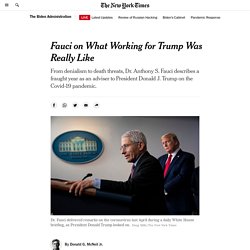 It coincided very much with the rapid escalation of cases in the northeastern part of the country, particularly the New York metropolitan area. I would try to express the gravity of the situation, and the response of the president was always leaning toward, “Well, it’s not that bad, right?” And I would say, “Yes, it is that bad.” It was almost a reflex response, trying to coax you to minimize it. People started breaking Covid rules when they saw those with privilege ignore them. We’ve heard repeatedly during the past year that until mass vaccination is achieved, the key to managing the Covid-19 epidemic is controlling human behaviour. 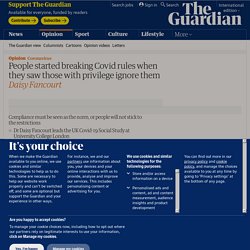 Yet as cases in the UK continue to spiral, with stricter social restrictions being implemented every few days, a key question remains: is anyone complying any more? Compliance has been one of the most misunderstood and misrepresented concepts of this pandemic. During the first wave of the virus back in the spring, there was concern that a lengthy lockdown would lead to “behavioural fatigue” and diminishing compliance with social restrictions. In fact, “behavioural fatigue” was not a scientific concept but a political one, neither supported by research from previous epidemics nor by data that subsequently emerged from our lockdown (over 97% showed good compliance with the rules, with no meaningful decrease from March to May). It was only as lockdown was eased that compliance began to decrease. WHO warns Covid-19 pandemic is 'not necessarily the big one'

World Health Organization experts have warned that even though the coronavirus pandemic has been very severe, it is “not necessarily the big one”, and that the world will have to learn to live with Covid-19. 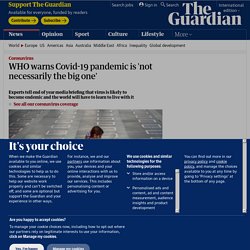 The “destiny” of the virus is to become endemic, even as vaccines begin to be rolled out in the US and UK, says Professor David Heymann, the chair of the WHO’s strategic and technical advisory group for infectious hazards. “The world has hoped for herd immunity, that somehow transmission would be decreased if enough persons were immune,” he told the WHO’s final media briefing for 2020. -19: How do pandemics end? The lesson of lockdown 2: never again run down England's public health defences. A leak inquiry? 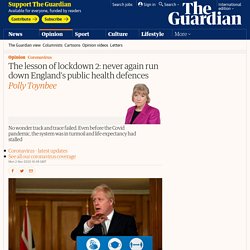 The looming lockdown was no state secret, as everyone had watched the graphs of doom ticking upwards daily: Ipsos Mori repeatedly found a majority of British people urging stricter controls. What was the cabinet doing all summer? That picture of the mask-free chancellor serving Wagamama plates for his “eat out to help out” disaster may be a career-killer, seeing as how he urged everyone into hot pubs and restaurants with the virus still in the air: his scheme alone raised infections by up to 17%. Why did England have Europe's worst Covid figures? The answer starts with austerity.

“The pestilence is at once blight and revelation,” wrote Albert Camus in The Plague, “it brings the hidden truth of a corrupt world to the surface.” 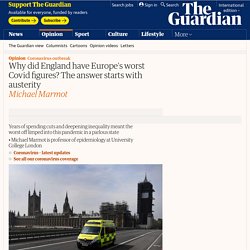 If that is true of Covid-19, as it was of the plague of Camus’ novel, then the UK’s dismal record is telling us something important about our society. We are doing badly: dramatic social inequalities in Covid-19 deaths; high rates in black, Asian and minority ethnic groups; and, now, the highest excess mortality in Europe. The statistician David Spiegelhalter, in his wise and clear way, has been counselling us against drawing too much on international comparisons because of differences in the way Covid-19 deaths are assigned. What we are learning about Covid-19 and kids. If I were Donald Trump's speechwriter, this is the team talk I would suggest. There’s a moment near the end of most sports movies when the coach gives a heartfelt pep talk right before the crucial game. 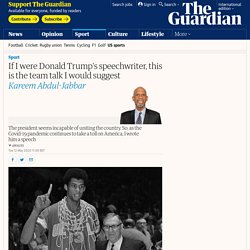 The coach will use words like “heart,” “honor,” and “teamwork”. How a decade of privatisation and cuts exposed England to coronavirus. Every Thursday at 8pm, millions of Britons have opened their front doors or stood on balconies to applaud the NHS. 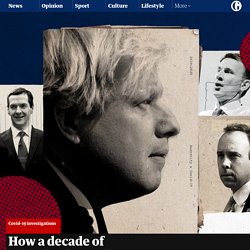 The ritual has been a weekly expression of gratitude to medical workers, and national pride in a state-run health service said to be the envy of the world. “Let’s not forget,” Boris Johnson said in early March, near the start of the coronavirus crisis, “we already have a fantastic NHS, fantastic testing systems and fantastic surveillance of the spread of disease.” Yet those who have experienced the government’s emerging testing and tracing operations for Covid-19 have had limited contact with the NHS. Instead, Britons with symptoms are directed to a network of 50 drive-through testing centres, set up by management consultants at Deloitte. Upon arrival, patients are marshalled not by NHS staff, but workers in hi-vis jackets supplied by outsourcing companies, such as Serco, G4S, Mitie and Sodexo.

Europe should brace for second wave, says EU coronavirus chief. The prospect of a second wave of coronavirus infection across Europe is no longer a distant theory, according to the director of the EU agency responsible for advising governments – including the UK – on disease control. 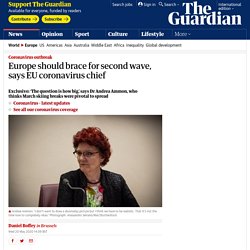 “The question is when and how big, that is the question in my view,” said Dr Andrea Ammon, director of the European Centre for Disease Prevention and Control (ECDC). It has been the unenviable task of scientists to tell it as it is through the coronavirus pandemic. While politicians have been caught offering empty reassurances, the epidemiologists, a job title new to many, have emerged as the straight shooters of the crisis, sometimes to their detriment.

And Ammon, a former adviser to the German government, speaks frankly in her first interview with a UK newspaper since the crisis began. Pharma giant Roche gets US go-ahead for Covid-19 antibody test. Swiss drug maker Roche Holding AG says it has received emergency use approval from the US Food and Drug Administration (FDA) for an antibody test to help determine if people have ever been infected with the coronavirus. Governments, businesses and individuals are seeking such blood tests to help them learn more about who may have had the disease, who may have some immunity and to potentially craft strategies to end lockdowns that have battered global economies. Roche had previously pledged to make its antibody test available by early May and to boost production by June to “high double-digit millions” per month. The Basel-based company, which also makes separate molecular tests to identify people with active Covid-19 infections, said its antibody test, Elecsys Anti-SARS-CoV-2, has a specificity rate of about 99.8% and sensitivity rate of 100%.

DiaSorin and Abbott recently received US emergency authorisation for their tests. 'How is this possible?' Researchers grapple with Covid-19's mysterious mechanism. Respiratory physician Dr David Darley says something peculiar happens to a small group of Covid-19 patients on day seven of their symptoms. “Up until the end of that first week, they’re stable,” says Darley, a doctor with Sydney’s St Vincent’s Hospital. “And then suddenly, they have this hyper-inflammatory response. How coronavirus almost brought down the global financial system. In the third week of March, while most of our minds were fixed on surging coronavirus death rates and the apocalyptic scenes in hospital wards, global financial markets came as close to a collapse as they have since September 2008.

The price of shares in the world’s major corporations plunged. Coronavirus: who will be winners and losers in new world order? Andrà tutto bene, the Italians have taught us to think, but in truth, will everything be better the day after? It may seem premature, in the midst of what Emmanuel Macron has described as “a war against an invisible enemy”, to consider the political and economic consequences of a distant peace. Few attempt a definitive review of a play after the first three scenes. : Death toll rises as virus spreads to every Chinese region. Media playback is unsupported on your device The death toll from the coronavirus outbreak has risen to 170, and a confirmed case in Tibet means it has reached every region in mainland China.

Chinese health authorities said there were 7,711 confirmed cases in the country as of 29 January. Infections have also spread to at least 15 other countries. The World Health Organization (WHO) are again meeting in Geneva to consider whether the virus should be declared a global health emergency. Various countries have implemented evacuation and quarantine plans for nationals wanting to return from China, where the outbreak began in the city of Wuhan. Russia has decided to close its 4,300km (2,670-mile) far-eastern border with China in an attempt to stop contagion. WHO Director-General Tedros Adhanom Ghebreyesus named Germany, Vietnam and Japan, as places where people had caught the virus from others who had visited China. The missing six weeks: how Trump failed the biggest test of his life. Here's how your body gains immunity to coronavirus. As the daughter of an air force officer and a nurse, I am fascinated by defence systems. There is none more impressive than the human immune system, equipped as it is with a rich arsenal to defend against different types of pathogen.

Viruses have evolved to trick, bypass and evade these defences. Our immune systems have, in turn, learned to recognise and deter these virus stealth tactics. Blaming China for coronavirus isn’t just dangerous. It misses the point.