From climate change to COVID, Gen Z's premature mid-life crisis could be a tale of hope and resilience. Generation Z is coming of age against a precarious backdrop of economic, climate and health crises. 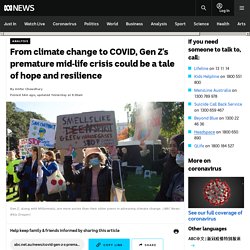 Still grappling with the damages of the Great Recession, Millennials may be the burnt-out generation, but their successors don't have it any easier. In the past few years, those born between 1997 and 2012 have experienced Trump's ascendency, devastating fires around the globe from Australia to the Amazon, and now a protracted global pandemic. Gen Z's crisis bucket list seems short of only a zombie apocalypse. A series of unfortunate events At the turn of the decade a series of movements made global shock waves. Australian Farmers' Markets Association. Port Macquarie's Nature School in high demand, principal achieves national recognition. Surrounded by bushland, young primary school students count native flowers, while others look out for a critically endangered bird. 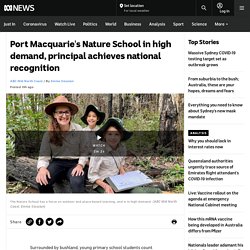 Key points: Demand is high for The Nature School, an independent NSW primary with a focus on outdoor learningThe head of the school is a finalist for Primary Principal of the Year in the Australian Education AwardsShe says parents are increasingly looking for education alternatives that better suit their families They are on an "adventure day" at The Nature School Primary, an independent school that offers a different approach to mainstream education by including the element of outdoor learning. Principal Catherine Oehlman is a driving force behind the Port Macquarie school on the New South Wales mid-North Coast. What are some rare historical photos you wouldn't believe exist? - Unmask - Quora. January 26 is a reminder that Australia still hasn't reckoned with its original sin. 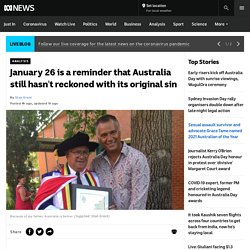 Dyiramadalinya badhu Wiradjuri. This is who I am. Before anything else, I am a Wiradjuri man. I am a proud Wiradjuri man. This is my language, which comes from my father, my babin. With international travel off the cards, more people are looking at 'van life' As a stand-up comedian, Matt Watson is well-versed in the art of the joke. 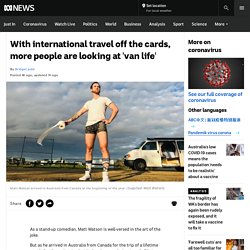 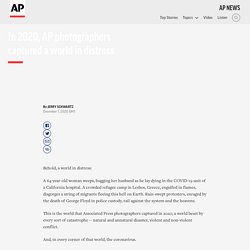 : No change in outbreak despite China spike, WHO says. Image copyright Reuters. 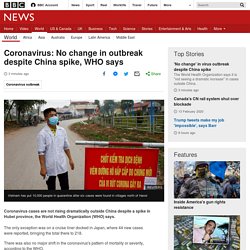 Chapter 3. Assessing Community Needs and Resources. An FAQ on the LETS system. This document was prepared by John Croft, of the Gaia Foundation. and edited by Warwick Rowell - warwick@bettong.EEPO.com.au . 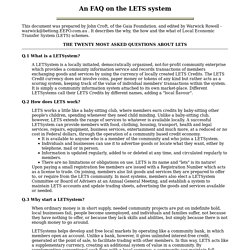 It describes the why, the how and the what of Local Economic Transfer System (LETS) schemes. Q.1 What is a LETSystem? A LETSystem is a locally initiated, democratically organised, not-for-profit community enterprise which provides a community information service and records transactions of members exchanging goods and services by using the currency of locally created LETS Credits.

The LETS Credit currency does not involve coins, paper money or tokens of any kind but rather acts as a scoring system, keeping track of the value of individual members' transactions within the system. The LETSystem Design Manual. Contents Page 1. 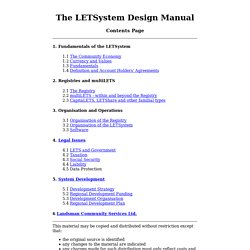 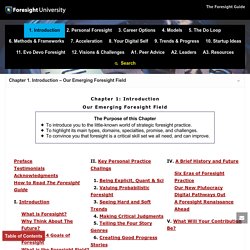 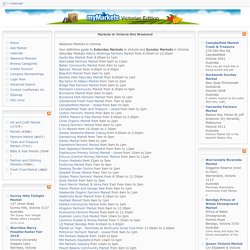 Saturday Markets. Journey to the Future by Guy Dauncey. We know about the G-7 or G-8, and the G-20, but what the world needs now is a new alliance of nations whose leaders will pledge to work together to heal the planet, build a new economy that will restore nature, and set their sights on 100% renewable energy, and the United Nations Sustainable Development Goals. In Journey to the Future, an E-17 Group of Nations is created by Denmark, Norway, Sweden, Finland, Iceland, Germany, Holland, France, South Korea, Japan, Ethiopia, the Philippines, Brazil, Bolivia, Ecuador, Costa Rica and Uruguay. Appropedia. Men's Sheds provide unexpected benefits. Across Australia, Men's Sheds give men of all ages a place to come together, to tinker with things and talk. While the Sheds’ main aim is to improve the health and wellbeing of our communities, a Shed in Victoria is demonstrating they can also help improve the environment and raise awareness about climate change.

The Koo Wee Rup Men’s Shed is located at Kooweerup Regional Health Service (KRHS), about an hour south east of Melbourne. Despite its name, the shed acts like a community hub - numerous men, women, young people, school groups and disability groups visit the Shed each week. Sacred Groves and the Integral Education System of Auroville. In Sacred Groves we have received many requests coming from students of architecture, engineering, art, craft and similar disciplines applying as volunteers for periods that normally are from 2 to 6 months.

In fact from the beginning of the project July 2013 until now the total number has been of approximately 320. Many of them came because they want to learn more about sustainable architecture, natural building, alternative materials, passive solar design among many things. Theory U. Introduction Theory U proposes that the quality of the results that we create in any kind of social system is a function of the quality of awareness, attention, or consciousness that the participants in the system operate from. City of Port Phillip - Community Environment eHub. Home. Shaping Cities and Communities. AHURI - Australian Housing and Urban Research Institute. Nutrition in the garden. A community garden at Griffith University gives local refugee and migrant communities in Logan and Beaudesert the opportunity to increase self-reliance and have social interaction thereby improving mental health and boosting their self-esteem.

The position of the Aboriginal and Torres Strait Islander Social Justice Commissioner was created by the federal parliament in December 1992 – a response to the findings of the Royal Commission into Aboriginal Deaths in Custody and the National Inquiry into Racist Violence. It was also a response to the extreme social and economic disadvantage faced by Indigenous Australians. Social justice is about making sure that every Australian – Indigenous and non-Indigenous – has choices about how they live and the means to make those choices. It also means recognising the distinctive rights that Indigenous Australians hold as the original peoples of this land. The Commission's role includes reviewing the impact of laws and policies on Indigenous peoples, reporting on Indigenous social justice and native title issues and promoting an Indigenous perspective on issues.

This work is led by Mick Gooda, the Aboriginal and Torres Strait Islander Social Justice Commissioner. IPRN Home. The new economics foundation. RUCHI - Rural Centre for Human Interests. People's Awakening and Development Society. Gandeepam - Siddha Hospital and Research Centre. Chetna India. Just Change India - Welcome to JC. Just Change ......... A grassroots response to the global economy that has left the vast majority of people powerless, with little or no control over the factors that influence their lives. With growth and financial gain having become the driving force behind all economic activity, this faceless market economy has slowly eroded our sense of community. Prolinnova. Module 11: Indigenous knowledge & sustainability.

Introduction. IUCN - Home. Endogenous Development. The Elders (organization) The Elders is an international non-governmental organisation of public figures noted as elder statesmen, peace activists, and human rights advocates, who were brought together by Nelson Mandela in 2007. They describe themselves as "independent global leaders working together for peace and human rights". Ratna Nidhi Charitable Trust.

Series of publications Trends in social cohesion. School Kids in Maharashtra Are Saving Water With This Simple Idea. Wessels Living History Farm, Inc. International Institute of Not Doing Much. Who knew being a 'bin chicken' could be so lucrative?