Biden Calls for Vaccine Access for All Adults by May 1 in Speech: Live Updates. Schools U-turn and rising Covid cases crush hopes of new year easing. Government hopes for a new year easing of the Covid pandemic are unravelling, with ministers forced into a U-turn on reopening primary schools and hospitals across the country struggling with rising numbers of severely ill patients. 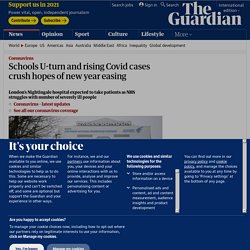 As the crisis escalates, the Nightingale hospital built in London’s ExCeL centre is expected to take Covid patients next week, for the first time since the spring. Hospitals in east London are under extraordinary pressure, while Essex and Buckinghamshire have both declared a major incident, which enables local leaders to seek government support. Other major hospitals around the country are preparing for the worst. 'Unprecedented': the US west's wildfire catastrophe explained. The historic wildfires that have seized the west are delivering a dire message: the climate crisis and decades of bad environmental policies have unleashed deadly consequences. 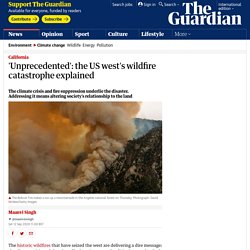 Half a dozen climate scientists, fire ecologists, forest officials and Indigenous fire practitioners interviewed by the Guardian this week described the recent fires in California, Oregon and Washington as alarming but unsurprising. Stephen Pyne, a fire historian, saw the fierce fires as “an ancient plague” reawakened. Chris Field, a climate scientist at Stanford University, said the sheer number and scale of the fires overwhelmed him. Vector-borne diseases. Vectors Vectors are living organisms that can transmit infectious pathogens between humans, or from animals to humans. 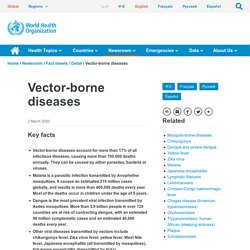 'We have no options': how water scarcity is changing south Iraq. Parasite: The real people living in Seoul's basement apartments. A surprise box office hit telling the story of a poor South Korean family living in a tiny, dark semi-basement, and a wealthy family living in a glamorous home in Seoul. 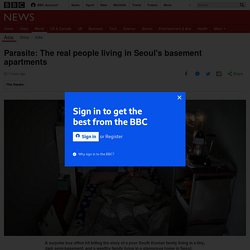 But while the Oscar-tipped film Parasite is a work of fiction, the apartment is not. They're called banjiha, and thousands of people live in them in South Korea's capital, Seoul. Julie Yoon, of BBC Korean, went to meet some of them, to find out what life is like there. There's basically no sunlight in Oh ke-cheol's banjiha. It gets so little light that even his little succulent plant couldn't survive. Extreme trauma leaves a legacy of pain for victims – and their children. Aids and HIV timeline: from Terry Higgins to PrEP. In 1982, one year after the first Aids-related death in the UK, the DJ and Hansard reporter Terry Higgins died. 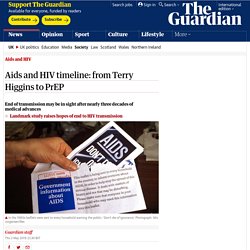 His partner, Rupert Whitaker, and friends established what would become the Terrence Higgins Trust, now the UK’s leading HIV charity, in his memory. Meanwhile, there was widespread media coverage of the mysterious new condition, acquired immune deficiency syndrome (Aids), initially known as “gay-related immune deficiency”. In 1983, scientists discovered the virus behind it, now known as human immunodeficiency virus (HIV). A few years later, tests for HIV were approved. Instagram's Newest Star Is ... a Tree? 'Moment of reckoning': US cities burn recyclables after China bans imports. A book at bedtime: the rise of sleep story apps. Insect collapse: ‘We are destroying our life support systems’ Photo Gallery: Capturing the Everyday Horror of Dairy Farming in Germany. CDC tells consumers to not eat romaine lettuce. Federal health officials are urging consumers to stop eating romaine lettuce and asking industry to halt all sales amid an extensive E. coli outbreak unfolding across the U.S. and Canada. 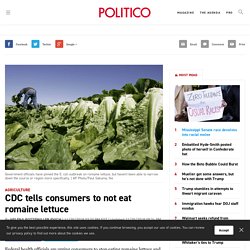 At least 32 people in 11 states have become sick as public health authorities in both countries try to pinpoint the source of the problem. Story Continued Below. Camp Fire: The Terrifying Science Behind California’s Massive Blaze. Why I changed my mind about nuclear power. Danger of terrorism. 'Manual scavenging': death toll of Indian sewer cleaners revealed. At least one Indian worker has died while cleaning sewers or septic tanks every five days since the beginning of 2017, according to the first official government statistics on the work, considered one of country’s deadliest jobs and most insidious form of caste discrimination. 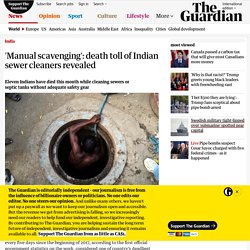 But activists and the National Commission for Safai Karamacharis (NCSK), the government agency that provided the data, say the real death rate is probably much higher – with many Indian authorities still undercounting the number of such workers in their state. Pret allergy death: parents describe final moments with their daughter. “Tashi, I love you so much, darling. 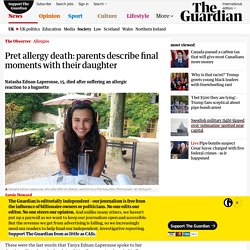 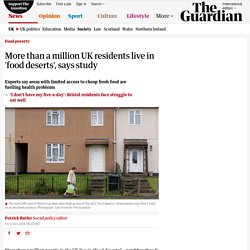 Nearly one in 10 of the country’s most economically deprived areas are food deserts, it says – typically large out-of-town housing estates and deprived inner-city wards served by a handful of small, relatively expensive corner shops. Public health experts are concerned that these neighbourhoods – which are often also “food swamps” with high densities of fast-food outlets – are helping to fuel a rise in diet-related conditions such as obesity and diabetes, as well as driving food insecurity. 'Watching our mates drop dead': New Zealand's synthetic cannabis crisis.