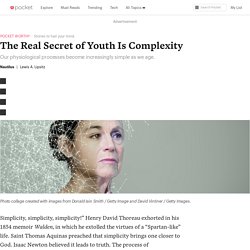 What Are the Ethical Consequences of Immortality Technology? - aeon - Pocket. Immortality has gone secular. 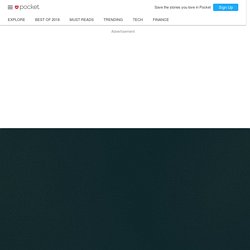 Unhooked from the realm of gods and angels, it’s now the subject of serious investment – both intellectual and financial – by philosophers, scientists and the Silicon Valley set. Several hundred people have already chosen to be ‘cryopreserved’ in preference to simply dying, as they wait for science to catch up and give them a second shot at life. But if we treat death as a problem, what are the ethical implications of the highly speculative ‘solutions’ being mooted?

Of course, we don’t currently have the means of achieving human immortality, nor is it clear that we ever will. But two hypothetical options have so far attracted the most interest and attention: rejuvenation technology, and mind uploading. Will 90 Become The New 60? - Nautilus - Pocket. Created with images from Dorling Kindersley / Getty Image and Vvoe / Shutterstock. 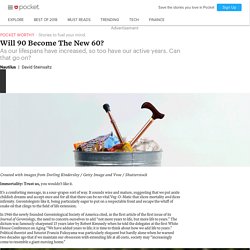 Yes, Life in the Fast Lane Kills You - Nautilus - Pocket. Nick Lane is an evolutionary biochemist at University College London who thinks about the big questions of life: how it began, how it is maintained, why we age and die, and why we have sex. 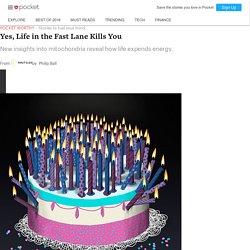 How Bulletproof Founder Dave Asprey Became the Ultimate Biohacker. Future - A high-carb diet may explain why Okinawans live so long. What Are the Ethical Consequences of Immortality Technology? - aeon - Pocket. Future - Can we cheat ageing? As she headed to her lab one sunny Texan morning, molecular biologist Meng Wang couldn’t yet guess what would be waiting for her when she arrived: tens of thousands of worms, wriggling around in different boxes. 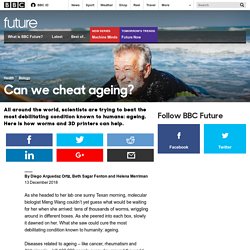 As she peered into each box, slowly it dawned on her. What she saw could cure the most debilitating condition known to humanity: ageing. Seeking Clues to Longevity in Lonesome George’s Genes. Finally, the drug that keeps you young. Judith Campisi has been a leading figure in the biology of aging since the early 1990s, when her research on the basic mechanisms of cancer revealed an unexpected finding—that cells enter a phase known as senescence that prevents them from becoming cancerous. 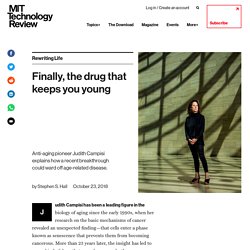 More than 25 years later, the insight has led to a new kind of drug that may slow or modestly reverse human aging. Campisi’s research is on the role of cellular senescence in cancer and other age-related diseases. How Long Can People Live? The most common risk factor for serious disease is old age. Heart disease, cancer, stroke, neurological conditions, diabetes — all increase radically with advancing years. And the older a person is, the more likely he or she is to have multiple chronic illnesses.

Some scientists hope one day to treat all of them at once — by targeting aging itself. What to Eat to Live to 100 - Andrew Merle - Pocket. I aspire to live an incredibly long, happy, and healthy life. 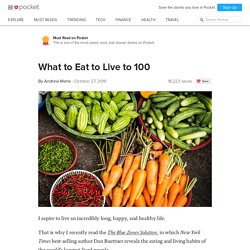 That is why I recently read the The Blue Zones Solution, in which New York Times best-selling author Dan Buettner reveals the eating and living habits of the world’s longest-lived people. For over a decade, Buettner (along with the National Geographic Society and a team of researchers) studied the 5 locations around the globe that have the highest concentrations of 100-year-olds, as well as exceptionally low rates of diseases such as cancer, diabetes, obesity, and heart problems. The Future of Aging Just Might Be in Margaritaville. Off a vacant stretch of highway in Daytona Beach, Fla., a line began to form outside the sales center for the first Latitude Margaritaville “55 and better” community. 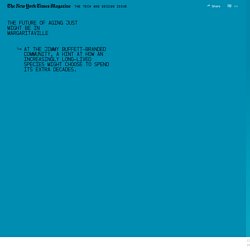 Those waiting dragged folding chairs, coolers, tents and dog-eared brochures featuring numbered sites that, in just over 24 hours, they could stake a claim to for a $10,000 deposit. The mood, shortly after 8 a.m. one Sunday last November, was festive, ecstatic even. Drinks flowed, pizza appeared, a steel-drum band played into the balmy night. Some neighbors in the 300-person queue liked each other so much that they decided to become actual neighbors, switching their site choices to live closer together. A sense of destiny seemed to guide many of their decisions. Redirect?&url= Human self-awareness means that, from a relatively early age, we are also aware of death. 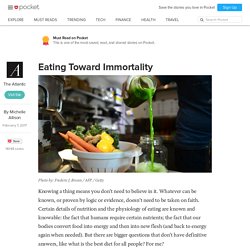 In his Pulitzer prize-winning book, The Denial of Death, Becker hypothesized that the fear of death–and the need to suppress that fear—is what drives much of human behavior. This idea went on, in social psychology, to the form the basis of Terror Management Theory. The Key to a Long Life Has Little to Do With ‘Good Genes’ Want to live for ever? Flush out your zombie cells. In a lab just south of San Francisco I am looking at two blown-up images of microscope slides on a computer screen, side by side. 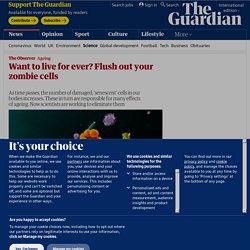 The slides are the same cross-sections of mouse knees from a six-month-old and an 18-month-old animal. The older mouse’s image has a splattering of little yellow dots, the younger barely any. That staining indicates the presence of so-called senescent cells – “zombie cells” that are damaged and that, as a defence against cancer, have ceased to divide but are also resistant to dying.

They are known to accumulate with age, as the immune system can no longer clear them, and as a result of exposure to cell-damaging agents such as radiation and chemotherapy. And they have been identified as a cause of ageing in mice, at least partially responsible for most age-related diseases. Developing therapies to kill senescent cells is a burgeoning part of the wider quest to defeat ageing and keep people healthier longer. Five more ways to cheat death Metformin. A compound found in apples can slow down aging. He Got Schizophrenia. He Got Cancer. And Then He Got Cured. Modern doctors have also observed that people who suffer from certain autoimmune diseases, like lupus, can develop what looks like psychiatric illness. These symptoms probably result from the immune system attacking the central nervous system or from a more generalized inflammation that affects how the brain works. Indeed, in the past 15 years or so, a new field has emerged called autoimmune neurology.

Some two dozen autoimmune diseases of the brain and nervous system have been described. The best known is probably anti-NMDA-receptor encephalitis, made famous by Susannah Cahalan’s memoir “Brain on Fire.” These disorders can resemble bipolar disorder, epilepsy, even dementia — and that’s often how they’re diagnosed initially. Admittedly, these diseases are exceedingly rare, but their existence suggests there could be other immune disorders of the brain and nervous system we don’t know about yet. Dr. Is fasting the fountain of youth? Since the Taylors have been intermittently fasting, often called just IF, they've maintained a healthy body weight, been more alert and energetic, experienced less stress, and are less prone to getting sick. While Taylor admits that whether or not he will live longer as a result of his eating pattern is a "good question," but he feels optimistic. "I already feel as though I am younger," said Taylor.

Extreme biohacking: the tech guru who spent $250,000 trying to live for ever. In September last year, the young Silicon Valley entrepreneur Serge Faguet posted an article on the tech website Hacker Noon. Can young blood stem the ravages of old age? – Jess Zimmerman. Saul Villeda, who leads a stem-cell research lab at the University of California, San Francisco, is not concerned about a black market for baby blood. ‘You sound like my mother,’ he told an anxious reporter for the New York public radio station WNYC’s science programme Radiolab in an interview last year. Ca.shine.yahoo.com-lifestyle-changes-boost-lifespan-10-years-doctor-171246067.html.url. Lifestyle changes can add years to a person’s lifespan and save the economy billions of dollars, according to a cardiologist with the Heart and Stroke Foundation.

Dr. Clyde Yancy, a professor of medicine and chief of cardiology at the Northerwestern University’s Feinberg School of Medicine, said a sharpended focus on health prevention — including seven steps to a healthy lifespan — could add a decade or more to the average person’s life. Does Life End at 35? Do you sometimes lie awake worrying that you aren't succeeding fast enough?

Google’s New Company Calico To Try to Cheat Death. A joke about Silicon Valley is that entrepreneurs always seem to focus on the problems facing people of their own age. That’s why young programmers have endless ideas for websites that will tell them what bar to hang out in. Ca.news.yahoo.com-removing-old-cells-could-extend-human-life-213606774.html.url. The old adage "Out with the old and in with the new" could help prevent age-related diseases if applied to certain cells, new research on mice suggests. By removing the body's worn-out cells, called senescent cells, several times during the lifetime of aging-accelerated mice, researchers were able to spare the mice of cataracts, aging skin and muscle loss. "We started treating animals when they were really young, before they started to establish these senescent cells," study researcher Darren Baker, of the Mayo Clinic College of Medicine in Minnesota, told LiveScience.