Cronyism in Britain is rampant and goes unpunished. We're turning into a banana republic. The sums are so vast, the secrecy so shocking, that “chumocracy” doesn’t begin to capture what Britain has become – redolent as we are of banana republics, the Russian oligarchy and failed states. 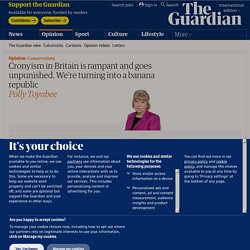 Lost is Britain’s self-image as the bowler-hatted beacon of civic rectitude, as our erstwhile Rolls-Royce civil service goes the way of, well, Rolls-Royce, no longer a British-owned car company. The Good Law Project, the admirable not-for-profit public-cleanser, last week proved in the high court that the government had breached what the judge called the “vital public function” of transparency over “vast quantities” of taxpayers’ money.

A VIP fast-lane for protective equipment contracts made the contacts of ministers, MPs, peers and officials 10 times more likely to win contracts. PPE prices sky-rocketed: even bodybags were being charged at 14 times their previous cost. There is a way to make this government face justice over the Covid tragedy. Charlie Williams lost his father to Covid-19 early in the pandemic, when he succumbed to the virus in a care home during the first wave. 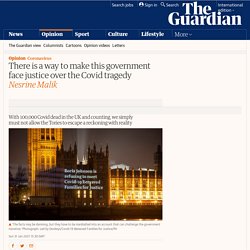 According to Charlie, his father’s death was manslaughter perpetrated by a government that bears “criminal” responsibility for the level of deaths over the past year. Charlie’s main focus now, as a member of Covid-19 Bereaved Families for Justice UK, is to force those in power to take responsibility for what they have done. Speaking to him is like flicking on a light switch and illuminating all that has been lost in our rolling, fractious national discussion about lockdown and the economy. Now the Swedish model has failed, it's time to ask who was pushing it. When future historians come to write the story of Britain’s chaotic pandemic response, one question in particular will surely puzzle them: why, as the UK experienced one of the world’s worst Covid outbreaks, did so many prominent public figures spend so much of 2020 talking about Sweden? 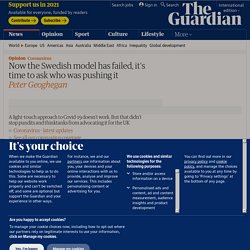 Almost as soon as Boris Johnson announced a national lockdown in late March, British newspaper columnists and professional contrarians demanded that the prime minister adopt “the Swedish model” – and they were still urging the same in September. We now know with certainty what public health experts have long predicted: a light-touch coronavirus approach does not work. Sweden has recorded far higher death rates than its Nordic neighbours, while suffering a similar economic hit. The Conservatives are hollowing the state and consolidating power: democracy is at stake.

Earlier this year Michael Gove surprised people by quoting the Italian Marxist Antonio Gramsci in a speech (the second time he has done so), but readers of political theory may recognise that the Tories’ strategy owes more to another student of Gramsci: the German communist activist Rudi Dutschke. 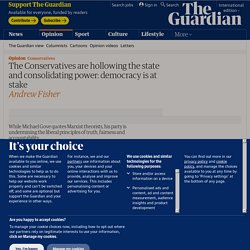 He coined the term “the long march through the institutions” to describe the strategy of gaining a dominant position in each of the major institutions in society, in Gramscian terms, to gain hegemony. The Tories started their long march in the 1980s by ripping through Britain’s socialist institutions: trade unions were shackled, publicly owned enterprise was privatised and council housing was sold off. The results were clear: a few people got very rich, poverty rose and inequality widened. England's three-tier system is an admission of failure. For some weeks now there has been a sense of inevitability about today’s announcement of substantial new restrictive measures affecting millions of people in England, as part of a new three-tier system. 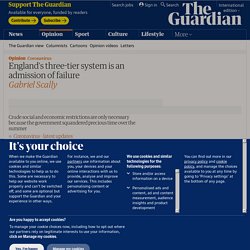 The plain fact is that the virus is out of control in many areas, and the growing level of infections has started to translate into hospital admissions and deaths, as Jonathan Van-Tam and colleagues set out at a briefing on Monday. Over the past few months the government has managed to create confusion and discord with a mixed bag of local restrictions. These seem to satisfy no one and, in terms of the overall picture, have proved to make only a limited contribution to reducing numbers of cases.

In as much as the new tiered system will be clearer in which restrictions are being employed, and is to be implemented in response to a defined level of infection, it should be welcomed. Financial resources should be shifted into the communities that are suffering worst. UK is most corrupt country in the world, says mafia expert Roberto Saviano. Britain is the most corrupt country in the world, according to journalist Roberto Saviano, who spent more than a decade exposing the criminal dealings of the Italian Mafia. 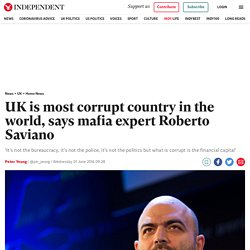 Mr Saviano, who wrote the best-selling exposés Gomorrah and ZeroZeroZero, made the comments at the Hay Literary Festival. Bagehot - Boris Johnson’s horrible House of Lords list. WALTER BAGEHOT, a Victorian editor of The Economist, celebrated the House of Lords as the more dignified of the two Parliamentary chambers. 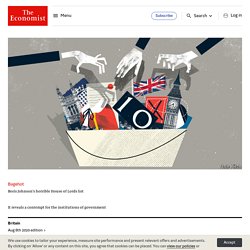 The attack on planning laws reveals a government that doesn't play by the rules. Another day, another act of sabotage. 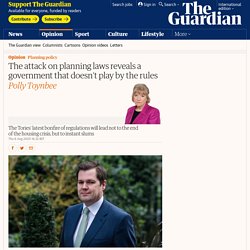 Today the government announced plans to strip away the planning system in England that guarantees local authorities and local inhabitants a measure of say in what developers do to our surroundings. Ripping down familiar landmarks and replacing them with gigantic, unplanned slabs adds to the sense of civic powerlessness. A Very British Coup? Former Royal Navy Trident Submarine Commander Assesses. Dr Andrew Corbett, of the Joint Services Command and Staff College, delves into evidence that the Government is actively undermining British democracy. 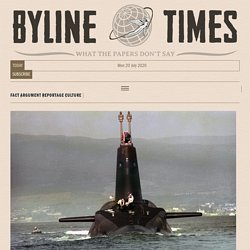 I Wouldn't Want to Press the Nuclear Button for Boris Johnson. As Dominic Cummings sets his eyes on reconfiguring Britain’s military defence, a former Trident submarine commander explains why he has lost trust in the British Government In his Radio 4 programme ‘The Human Button’ in 2008, Lord Peter Hennessy asked the commanding officer of HMS Vanguard if he would launch Trident nuclear missiles if ordered to.

Without hesitation, he replied “yes”. As his predecessor, I too would have answered with similar certainty. But I cannot say the same today. In fact, I would have been happy to serve as a commanding officer under every UK Government since 1945 – except this one. ‘Civil military relations’ – the subordination of military power to political control – is never more important than in the control of nuclear weapons.

Brexit was meant to make Britain global. It has made us friendless.

The UK position is consistent with the Eurosceptic doctrine of pristine sovereignty. In that view, EU institutions eat national power. Every programme, even something as ostensibly benign as the Erasmus scheme for student exchanges, is a trap. The whole point of new “global” Britain, as an upgrade from the old European version, is that it is freer to deal with other global players peer-to-peer. – barbaragrieve

The essential issue here is that Brexit can make EU membership go away, but not the EU itself. When the only problem was being inside, escape was the only solution worth talking about. Hardline Eurosceptics were no more bothered by the issue of how an ex-member state might manage relations with Brussels than arsonists are interested in what to do with ashes. – barbaragrieve

The civil service is right to be paranoid about Boris Johnson’s Gang of Three. The real message behind 'stay alert': it'll be your fault if coronavirus spreads. Officially, the new strategy is “personal responsibility” and “good, solid British common sense”, as our prime minister colourfully describes it; unofficially, operation blame the public is well under way. As media outlets query why London’s trains and buses are rammed despite government advice, our transport secretary, Grant Shapps, pleads with silly old commuters not to “flood” back on to public transport. The small flaw is that the government has ordered millions of workers to return to their jobs, and given the continued failure to invent teleporters, they need a means to bridge the distance between their homes and their work.

If you’re a Londoner earning more than £70,000 a year, this is no big deal: about 80% have access to a car, and most can work from home. Unfortunately, nearly half of the capital’s citizens – and over 70% of those earning less than £10,000 – do not have access to a car: if you want to understand those images of packed trains and buses, start here. A public inquiry into the UK's coronavirus response would find a litany of failures. Will the inevitable public inquiry into the UK’s Covid-19 response pin the blame on a few scapegoats? I hope not. Britain’s failure to move quickly and effectively is the symptom of a more comprehensive system failure. Fears that Britons self-isolating with Covid-19 may seek help too late. Concerns are being raised that people isolating at home with worsening Covid-19 symptoms may not call for medical help early enough when they enter the second, more severe, phase of the virus, possibly reducing their chances of survival.

The NHS does not have a proper monitoring system for those suspected of having coronavirus, said Dr Bharat Pankhania, a senior clinical lecturer at the University of Exeter medical school. “If a patient is developing pneumonia, it can get progressively worse very quickly and hence early admission upon the first signs of difficulty with breathing are very important,” he said. “It is important for people recovering at home that there be a monitoring system in place too. Want to know what a Boris Johnson government would look like? I have just the book. Boris Johnson is the wrong man in the wrong job at the wrong time. Everything unravels with almost indecent speed. After a brush with death, the prime minister is still recovering at Chequers when one of his many supportive newspapers drops a grenade straight down his Elizabethan chimney.

No period of grace and convalescence: the Sunday Times didn’t even wait for him to stumble back to Downing Street before firing off its devastating attack on his cavalier incompetence over the coronavirus outbreak. What makes the insiders’ account so devastating is that it chimes with everything everyone already knows about Boris Johnson’s character. So much for entitled millennials – it’s billionaires such as Richard Branson who are begging for loans.

Don’t fritter away your money on avocado toast. Richard Branson's bailout plea proves there's no one more shameless. Motorboating enthusiast Richard Branson is playing a particularly idiosyncratic game of Monopoly. He would like to mortgage his private Caribbean island. In return, you, the taxpayer, have to buy him Mayfair and Park Lane, all the greens, all the yellows, all the reds, and stick a hotel on every one of them. Also, if Richard lands on Super Tax or Income Tax he doesn’t pay them. And if he gets the Community Chest saying “pay hospital fees”, he refuses and sues the hospital. ‘Complacent’ UK draws global criticism for Covid-19 response. Unless the government changes tack, the UK's lockdown will have been for nothing. There are no silver bullets, clever models or easy answers for how to control the coronavirus. But neither is it rocket science. Governments have three choices in how they respond.

The first and most difficult path is to contain the virus through a programme of mass testing, contact tracing and isolating. This requires a huge effort: building a large infrastructure to monitor cases of the virus and identify hotspots, ensuring this system runs efficiently, providing adequate PPE to everyone who needs it, and deploying border controls to vet who is entering the country. The second path is far simpler. How a decade of privatisation and cuts exposed England to coronavirus.

Johnson and Cummings have revealed their flawed view of what strong leadership is. Cummings and Johnson evil geniuses? Hardly, just lazy and incompetent.