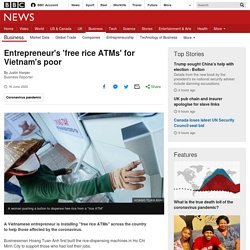 Businessman Hoang Tuan Anh first built the rice-dispensing machines in Ho Chi Minh City to support those who had lost their jobs. The ATMs, which give out 1.5kg (3.3lbs) of rice at a time, became so popular he is building more around Vietnam. Around five million people have lost their livelihoods in Vietnam during its national lockdown. The semi-automated machines are simple yet effective. Coronavirus: 98-year-old doctor working through the lockdown. News BBC News Navigation Sections Media player. 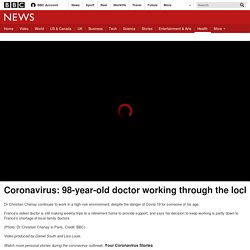 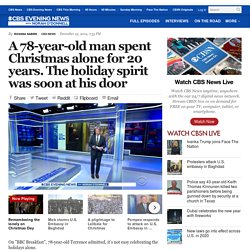 "Since my mother passed 20 years ago, I've had every Christmas on my own. And you do feel it very much," he said with his voice breaking. "You'd make yourself a sandwich, and you'd just, well, watch TV," Terrence said. Buyer returns Grease jacket to Olivia Newton-John after auction. Image copyright Getty Images The leather jacket Olivia Newton-John wore in Grease has been given back to the actor by the man who bought it from her at auction for $243,200 (£185,000). 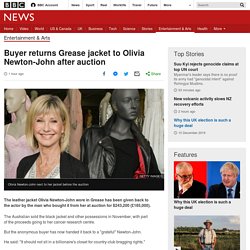 The Australian sold the black jacket and other possessions in November, with part of the proceeds going to her cancer research centre. Viewpoint: How a hug sparked debate on race and forgiveness. Media playback is unsupported on your device A striking display of compassion from the brother of a murder victim to his killer was, to some, a heart-wrenching example of empathy. 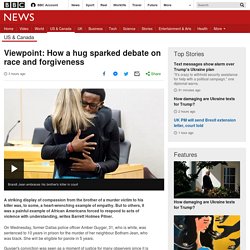 But to others, it was a painful example of African Americans forced to respond to acts of violence with understanding, writes Barrett Holmes Pitner. On Wednesday, former Dallas police officer Amber Guyger, 31, who is white, was sentenced to 10 years in prison for the murder of her neighbour Botham Jean, who was black. Is the bystander effect a myth? HK billionaire to pay $14m in tuition fees for Chinese students. Image copyright Getty Images Hong Kong's richest man Li Ka-Shing has pledged to pay the tuition fees for a class of Chinese university students through his charitable foundation. 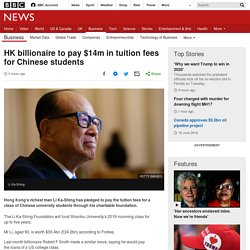 The Li Ka-Shing Foundation will fund Shantou University's 2019 incoming class for up to five years. Mr Li, aged 90, is worth $30.4bn (£24.2bn) according to Forbes. Last month billionaire Robert F Smith made a similar move, saying he would pay the loans of a US college class. The Li Ka-Shing Foundation will cover full tuition for four to five years for undergraduates, starting with the incoming class of 2019 at Shantou University, in the Guangdong province of China. Irish baby born on a train given 25 years free rail travel. Image copyright Getty Images A baby girl that was born on an Irish train has been given 25 years worth of free rail travel. 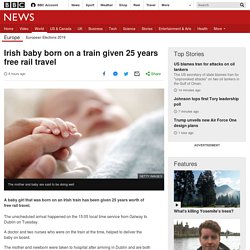 The unscheduled arrival happened on the 15:05 local time service from Galway to Dublin on Tuesday. A doctor and two nurses who were on the train at the time, helped to deliver the baby on board. The mother and newborn were taken to hospital after arriving in Dublin and are both doing well. Goggles 'give back' sight to Maisy so she can read again. MacKenzie Bezos pledges to donate half her $37bn fortune.

Image copyright Getty Images MacKenzie Bezos, the ex-wife of Amazon boss Jeff Bezos, has promised to give half her fortune to charity. 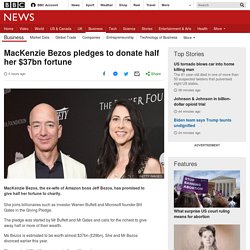 She joins billionaires such as investor Warren Buffett and Microsoft founder Bill Gates in the Giving Pledge. The pledge was started by Mr Buffett and Mr Gates and calls for the richest to give away half or more of their wealth. Dancing five-year-old amputee goes viral. 'You are loved' - the power of an anonymous note and gift. Image copyright Ashley Jost When Ashley Jost returned home from her routine Sunday shopping trip she was unaware her groceries contained an unexpected gift. 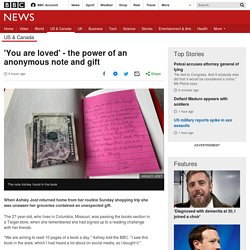 The 27-year-old, who lives in Columbia, Missouri, was passing the books section in a Target store, when she remembered she had signed up to a reading challenge with her friends. US professor praised for holding student's baby during class. Thank you note for VHS player makes thousands cry. Image copyright . 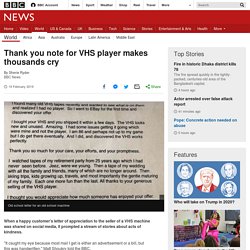 When a happy customer's letter of appreciation to the seller of a VHS machine was shared on social media, it prompted a stream of stories about acts of kindness. "It caught my eye because most mail I get is either an advertisement or a bill, but this was handwritten," Matt Shoukry told the BBC. "I was blown away by how much emotion and feeling this gentleman had put into a note, and how I felt so connected to him," Matt, from St Louis, Missouri, said. US shutdown: Canadian air traffic controllers send pizza to US workers. Image copyright PWM ATCT/Facebook Air traffic controllers in Canada are sending hundreds of pizzas to their US counterparts who are working through the federal government shutdown.

A collection started by employees had blossomed into an industry-wide show of solidarity, the Canadian Air Traffic Control Association told the BBC. The partial government shutdown - now in its 24th day - has become the longest in US history. It has affected 800,000 public workers and closed many government offices. The firm whose staff are all autistic. Image copyright Getty Images Peter, Evan and Brian work at a small technology firm based by the beach in Santa Monica, testing software and fixing bugs. On first inspection it seems like any other Los Angeles-based company, with tasteful art on the white walls and calm-inducing diffusers dotted about. Peter describes the working atmosphere as "quiet, but fun", and especially likes the fact that there is no pressure to socialise, while Evan says of his employers that they are "very accommodating and understanding".

Brian describes his office as "unique". Auticon is one of only a handful of companies that cater exclusively for employees who are on the autistic spectrum. Formerly known as MindSpark before being acquired by German-based Auticon, the firm was founded by Gray Benoist who, as the father of two autistic sons, saw few options in the workplace that could cater for their needs.