British Life and Culture in the UK - Woodlands Junior School 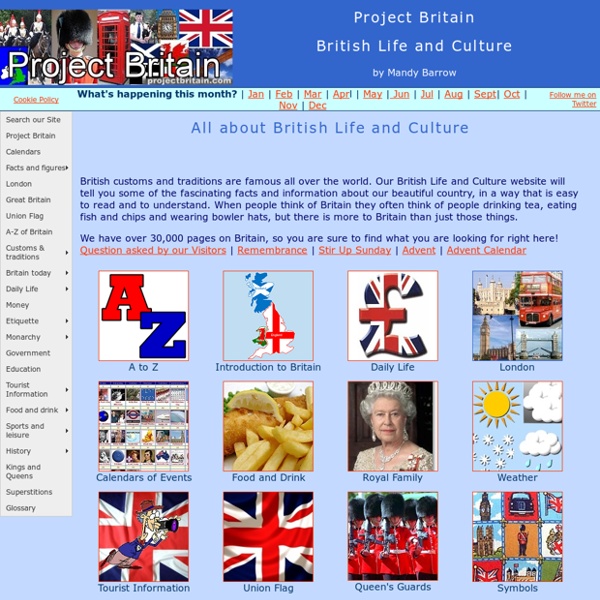 British customs and traditions are famous all over the world. Our British Life and Culture website will tell you some of the fascinating facts and information about our beautiful country, in a way that is easy to read and to understand. When people think of Britain they often think of people drinking tea, eating fish and chips and wearing bowler hats, but there is more to Britain than just those things. We have over 30,000 pages on Britain, so you are sure to find what you are looking for right here! Question asked by our Visitors |Easter | Shrove Tuesday (Pancake Day) |

weareteachers It can be a challenge to get middle schoolers interested in reading. The thought of tackling a thick novel can be overwhelming, especially during distance learning. Short stories are always a great choice. 92-fr The Atlantic and Indian oceans mix and mingle off South Africa’s coast, producing a bounty of fascinating flora and fauna both on land and in the water. Writer Ingrid Sinclair takes us on a tour. Text: Ingrid Sinclair Country: South Africa outh Africa has a natural landscape that is as diverse as its people. On land, it is considered one of the most biologically diverse places on earth. But look a bit further and you’ll find that South Africa also has one of the world’s most interesting coastlines.

Science math language school project classroom dialog cyberpal Think together our feelings, emotions and thoughts about Peace: peace in the world, interior peace, Peace development.. The idea of the project is sending Peace messages to students of different countries. What's Peace for you? Montgomery Bus Boycott: A Victory for Civil Rights – Speakeasy News Sixty years ago, on 20 December, 1956, Martin Luther King and his fellow campaigners won a first victory in the long battle for African-American civil rights. The Montgomery Bus Boycott, which had begun when Rosa Parks famously refused to move to the back of the bus, finally ended after 381 days, when the Supreme Court ruled bus segregation illegal. But Rosa Parks wasn’t the first African American woman to refuse to give up her seat in a Montgomery bus. Rosa Parks refused to give up her seat on 1 December, 1955. In the previous year, four other women had refused to move seats.

10 Teaching Literature Ideas 10 Ways to... With The New York Times Classics, contemporary fiction, young adult and graphic novels, sequels and adaptations: here are 10 ideas that will help any literature teacher use the vast resources of NYTimes.com to connect literature to life. Write to us with ideas: For what works of literature would you like to have a collection of Times resources?