Bronze Age ‘Birdman’ Had a Headdress Made of Dozens of Bird Beaks, Skulls. The skeleton of Dushan 1 offers new perspectives on the settlement of Homo sapiens in China. Complex stone tools in China may re-write our species' ancient history. Courtesy of Dr. 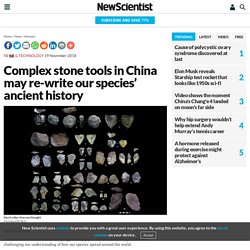 Bo Li By Colin Barras A haul of ancient stone tools has plugged a big gap in China’s archaeological record, challenging our understanding of how our species spread around the world. Our hominin predecessors began making stone tools more than 3 million years ago. As time went on, these tools became more complex. Rather than chipping flakes off a stone to create a tool, Levallois techniques work on the stone so it is the flakes themselves that become the tools.

Until recently, it seemed that the Levallois revolution didn’t spread east to places like China until much later – about 40,000 years ago – but that idea is now being questioned. The discovery follows a related announcement at the start of the year. It is a difficult question to answer, says Michael Petraglia at the Max Planck Institute for the Science of Human History in Germany, who wasn’t involved in either study. This article appeared in print under the headline “China’s advanced Stone Age tools” This 11,000-year-old statue unearthed in Siberia may reveal ancient views of taboos and demons. In 1894, gold prospectors digging up a peat bog near the Russian city of Yekaterinburg unearthed something bizarre: a carved wooden idol 5 meters long. 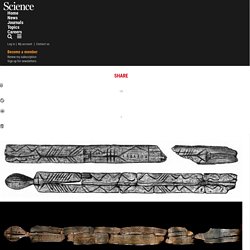 Carefully smoothed into a plank, the piece was covered front and back with recognizable human faces and hands, along with zigzag lines and other mysterious details. It also had a recognizably human head, with its mouth open in an “o.” For more than a century, the statue was displayed as a curiosity in a Yekaterinburg museum, assumed to be at most a few thousand years old. This week, a paper published in the journal Antiquity argues that the statue was crafted from a single larchwood log 11,600 years ago, making it one of the world’s oldest examples of monumental art. Fossil Footprints Show Humans Hunting a Giant Sloth.

Could these be the oldest Neandertal tools made with fire? In the spring of 2012, while digging a hole for a thermal pool, construction workers in Grosseto, Italy, hit scientific pay dirt: layers of stratified soil and rock filled with prehistoric bones and artifacts close to 171,000 years old. 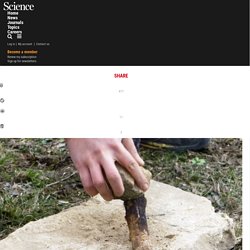 Excavating the pool would have to wait. With further digging, the researchers found tantalizing evidence of early fire use—nearly 60 partially burned digging sticks made mostly of boxwood. The most likely creators of the sticks were Neandertals, who are known to have lived in Europe at that time. First modern Britons had 'dark to black' skin, Cheddar Man DNA analysis reveals. The first modern Britons, who lived about 10,000 years ago, had “dark to black” skin, a groundbreaking DNA analysis of Britain’s oldest complete skeleton has revealed. 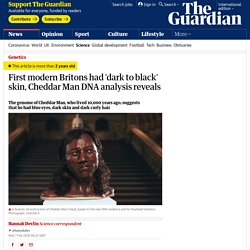 The fossil, known as Cheddar Man, was unearthed more than a century ago in Gough’s Cave in Somerset. Intense speculation has built up around Cheddar Man’s origins and appearance because he lived shortly after the first settlers crossed from continental Europe to Britain at the end of the last ice age. Controversial femur could belong to ancient human relative. When anthropologists meet in France at the end of January, one of the most provocative fossils in the study of human evolution will not feature on the agenda. 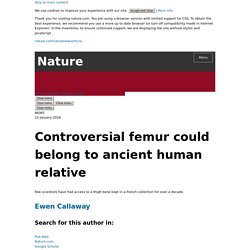 The approximately 7-million-year-old femur1 was examined more than a decade ago by scientists in the French city of Poitiers, but has yet to be thoroughly described in a published scientific paper. The fossil may belong to the earliest known hominin, the group that includes humans and their extinct relatives. Few people have had access to it, but two scientists who analysed the bone briefly in 2004 have prepared a preliminary description of it. They had hoped to present their analysis at the meeting, which is organized by the Anthropological Society of Paris and is taking place in Poitiers. Excavating Fluffy Pastries and Pulling Gold Dust from the Air: Best Paleoanthropology of 2017! 2017 was not an easy year. 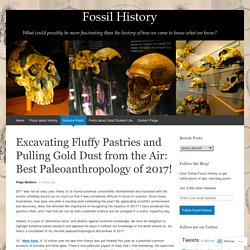 Many of us found ourselves consistently disheartened and frustrated with the events unfolding around us–so much so that it was sometimes difficult to focus on science. Given those frustrations, how does one write a roundup post celebrating the year? By applauding scientific achievement and discovery, does this diminish the importance of recognizing the injustice of 2017? I have pondered this question often, and I feel that we can do both–celebrate science and be outraged in a useful, impactful way. Indeed, in a year of “alternative facts” and attacks against scientific knowledge, we have an obligation to highlight evidence-based research and applaud the ways it furthers our knowledge of the world around us. 10. 9. What teeth can reveal about the secret lives of our ancestors. Old tools and bones can reveal a lot about our ancestors. 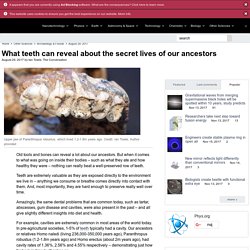 But when it comes to what was going on inside their bodies – such as what they ate and how healthy they were – nothing can really beat a well-preserved row of teeth. Teeth are extremely valuable as they are exposed directly to the environment we live in – anything we consume or breathe comes directly into contact with them. And, most importantly, they are hard enough to preserve really well over time. Amazingly, the same dental problems that are common today, such as tartar, abscesses, gum disease and cavities, were also present in the past – and all give slightly different insights into diet and health. For example, cavities are extremely common in most areas of the world today. Modern humans lost DNA when they left Africa—but mating with Neandertals brought some back. When Neandertals mated with modern humans, they shared more than an intimate moment and their own DNA. 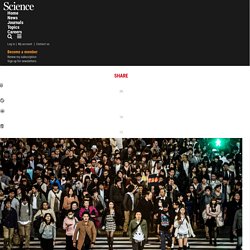 They also gave back thousands of ancient African gene variants that Eurasians had lost when their ancestors swept out of Africa in small bands, perhaps 60,000 to 80,000 years ago. Restored to their lineage, this diversity may have been a genetic gift to Eurasian ancestors as they spread around the world. Today, however, some of these African variants are a burden: They seem to boost the risk of becoming addicted to nicotine and having wider waistlines. In talks last week at the annual meeting of The American Society of Human Genetics here, researchers announced that some “Neandertal” genetic variants inherited by modern humans outside of Africa are not peculiarly Neandertal genes, but represent the ancestral human condition.

Neanderthals With Disabilities Survived Through Social Support. Neanderthals 101. Tearful Anthropologists Discover Dead Ancestor Of Humans 100,000 Years Too Late. JOHANNESBURG—Lamenting that there was nothing they could possibly do, tearful anthropologists announced at a press conference Thursday that they had discovered the bodies of 15 deceased human ancestors 100,000 years too late. 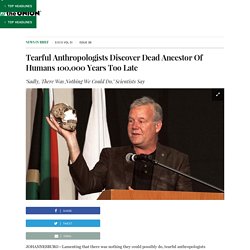 “Not too long ago, these early people were alive and going about their normal daily lives, but sadly, by the time we scaled down the narrow 90-meter chute leading into the cave, they’d already been dead for at least 10,000 decades,” said visibly upset University of the Witwatersrand paleoanthropologist Lee R. Berger, bemoaning the fact that they could have saved the group of human predecessors if they had just reached the Rising Star cave system during the Pleistocene epoch. The Leakey Foundation. Dinaledi skeletal specimens. 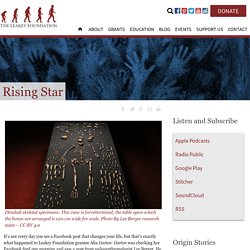 This view is foreshortened; the table upon which the bones are arranged is 120-cm wide for scale. Photo By Lee Berger research team – CC BY 4.0. Starting Fires to Unearth How Neanderthals Made Glue - NYTimes.com. 23456. Scientists Can Now Pull the DNA of Ancient Humans Out of Cave Dirt - The Atlantic. Around 45,000 years ago, in a Belgian cave, a Neanderthal died. As its body decayed, its cells split apart, spilling their contents onto the cave floor.

Those remnants included the Neanderthal’s DNA, some of which stuck to minerals in the sediment. There, leashed to the very rock, the DNA persisted, long after its owner’s body had disappeared and its bones had been carted off by scavengers. Neandertals and early modern humans probably didn’t meet at rumored rendezvous site. Croatia’s scenic Vindija Cave was thought to be a potential trysting site for Neandertals and early modern humans some 32,000 years ago. Now, a new study questions that idea, using a more exacting form of radiocarbon dating to suggest instead that Neandertals used the cave 40,000 years ago—some 8000 years before modern humans lived in that part of Europe.

If true, the find casts doubt on the long-held assumption by some that the two hominids overlapped in the region. “Many of us have long suspected [this],” writes Erik Trinkaus, a biological anthropologist at Washington University in St. Louis who wasn’t involved in the work, in an email. He points out that the dating of sites across Europe have generally put the Neandertal’s demise there about 40,000 years ago. Earlier this year, a team led by archaeologists Thibaut Devièse and Thomas Higham at the University of Oxford in the United Kingdom turned to a more refined method of radiocarbon dating.

Buried tools and pigments tell a new history of humans in Australia for 65,000 years. In saliva, clues to a 'ghost' species of ancient human. In saliva, scientists have found hints that a "ghost" species of archaic humans may have contributed genetic material to ancestors of people living in Sub-Saharan Africa today. The research adds to a growing body of evidence suggesting that sexual rendezvous between different archaic human species may not have been unusual. Past studies have concluded that the forebears of modern humans in Asia and Europe interbred with other early hominin species, including Neanderthals and Denisovans.

The new research is among more recent genetic analyses indicating that ancient Africans also had trysts with other early hominins. "It seems that interbreeding between different early hominin species is not the exception—it's the norm," says Omer Gokcumen, PhD, an assistant professor of biological sciences in the University at Buffalo College of Arts and Sciences.

The first humans. Bone’s Marks Suggest a Cannibal Ritual in Ancient Britain - NYTimes.com. National Geographic Explorer Discovers Amazing 13-Million-Year-Old Ape Skull. This week, the scientific journal Nature announced National Geographic Explorer Isaiah Nengo’s discovery of a remarkably complete fossil ape skull. The fossil is the skull of an infant that lived about 13 million years ago, and it is the most complete extinct ape skull known in the fossil record to date. Fossils rewrite story of human settlement in southeast Asia. Fossil Reveals What Last Common Ancestor of Humans and Apes Looked Liked. The most complete extinct-ape skull ever found reveals what the last common ancestor of all living apes and humans might have looked like, according to a new study. Family Meal? Ancestral Humans May Have Engaged in Ritualistic Cannibalism. New 13 million-year-old infant skull sheds light on ape ancestry. The Leakey Foundation is proud to have funded the discovery of the most complete Miocene ape skull in the fossil record.