Oldest Homo sapiens bones ever found shake foundations of the human story. Startling fossil find shows Homo Sapiens is 100,000 years older than previously thought. If you're drawing your genealogical chart, be prepared to buy a lot more paper because the human race is much older than we thought. 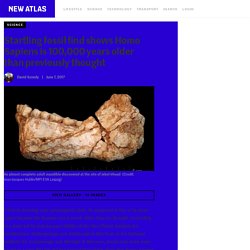 According to a team led by Jean-Jacques Hublin of the Max Planck Institute for Evolutionary Anthropology and Abdelouahed Ben-Ncer of the National Institute for Archaeology and Heritage in Morocco, fossils and stone tools found in a cave 100 km (62 mi) west of Marrakesh show that Homo Sapiens has been around for at least 300,000 years. Until recently, the most popular theory about the emergence of modern humans is that they appeared about 200,000 years ago in a narrow region of East Africa in what is now known as Ethiopia. However, new finds and research into ancient DNA indicates that our ancestors appeared 100,000 earlier, were widespread over the continent, and underwent a complex evolution before spreading out into Asia and Europe. Oldest Fossils of Our Species Push Back Origin of Modern Humans. The oldest known bones of our species, dating back around 300,000 years, have been discovered in a cave in Morocco. 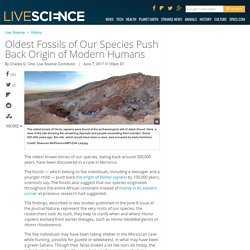 The fossils — which belong to five individuals, including a teenager and a younger child — push back the origin of Homo sapiens by 100,000 years, scientists say. The fossils also suggest that our species originated throughout the entire African continent instead of mainly in its eastern corner as previous research had suggested. The findings, described in two studies published in the June 8 issue of the journal Nature, represent the very roots of our species, the researchers said. As such, they help to clarify when and where Homo sapiens evolved from earlier lineages, such as Homo heidelbergensis or Homo rhodesiensis. Perfectly Preserved Mummies Yield Medical Secrets. Hundreds of skeletons have lain scattered around a crypt beneath a church in Vilnius, Lithuania, for centuries. 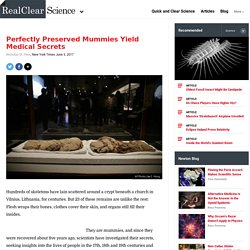 But 23 of these remains are unlike the rest: Flesh wraps their bones, clothes cover their skin, and organs still fill their insides. Mass Grave from Thirty Years' War Battle Reveals Soldiers' Fatal Wounds. In November of 1632, the townspeople of Lützen, Germany, were stuck with a grim task: They had to bury some 9,000 soldiers who were left dead on a battlefield after a bloody fight during the Thirty Years' War. 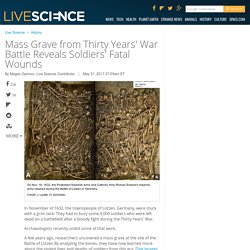 Archaeologists recently undid some of that work. A few years ago, researchers uncovered a mass grave at the site of the Battle of Lützen.By analyzing the bones, they have now learned more about the violent lives and deaths of soldiers from this era. [See Images of the War Grave and Battle Injuries] Error loading player: No playable sources found The Thirty Years' War was one of the bloodiest events in European history — deadlier than the Black Death and World War II, in terms of the proportion of the population lost.

A Tumor with Teeth Discovered in Gothic Graveyard. Archaeologists excavating a gothic church graveyard in Lisbon, Portugal, made a discovery for the annals of medical history: an ovarian tumor that had started forming teeth. 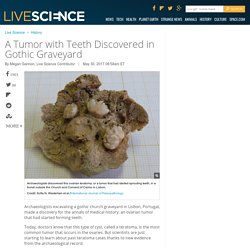 Today, doctors know that this type of cyst, called a teratoma, is the most common tumor that occurs in the ovaries. But scientists are just starting to learn about past teratoma cases thanks to new evidence from the archaeological record. A teratoma, which essentially translates as "monstrous swelling" from Greek, can occur when cells that should become eggs start multiplying abnormally and form mature tissues like hair, teeth and bones. [25 Grisly Archaeological Discoveries] Error loading player: No playable sources found These cysts account for up to 20 percent of all ovarian tumors, and most develop in women of reproductive age, according to past studies.

Chaco Culture: Pueblo Builders of the Southwest. The "Chaco Culture," as modern-day archaeologists call it, flourished between roughly the 9th and 13th centuries A.D. and was centered at Chaco Canyon in what is now New Mexico. 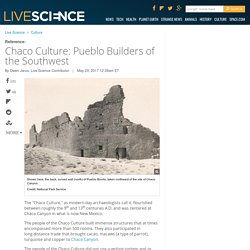 The people of the Chaco Culture built immense structures that at times encompassed more than 500 rooms. They also participated in long-distance trade that brought cacao, macaws (a type of parrot), turquoise and copper to Chaco Canyon. The people of the Chaco Culture did not use a writing system and as such, researchers have to rely on the artifacts and structures they left behind, as well as oral accounts that have been passed on through generations, to reconstruct what their lives were like. 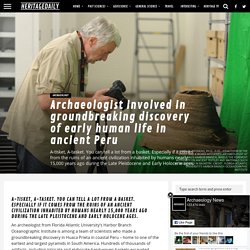 You can tell a lot from a basket. Especially if it comes from the ruins of an ancient civilization inhabited by humans nearly 15,000 years ago during the Late Pleistocene and Early Holocene ages. Scientists Extract DNA From Ancient Humans Out of Cave Dirt. Finding bones from early humans and their ancestors is difficult and rare—often requiring scientists to sort through the sediment floor of caves in far-flung locations. 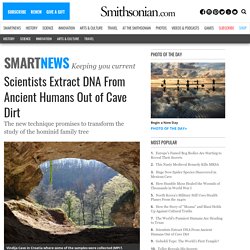 But modern advances in technology could completely transform the field. As Gina Kolta reports for The New York Times, a new study documents a method to extract and sequence fragments of hominid DNA from samples of cave dirt. The study, published this week in the journal Science, could completely change the type of evidence available to study our ancestral past. Cookies are Not Accepted - New York Times. Fossil DNA identifies the first seafarers in the Pacific Ocean. The 3,000-year-old skull preserved in a jar is characteristic of agriculturalist Lapita culture. 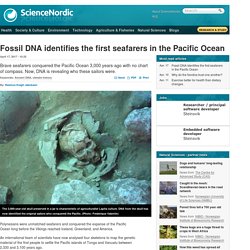 DNA from the skull has now identified the original sailors who conquered the Pacific. (Photo: Frederique Valentin) Polynesians were unmatched seafarers and conquered the expanse of the Pacific Ocean long before the Vikings reached Iceland, Greenland, and America. An international team of scientists have now analysed four skeletons to map the genetic material of the first people to settle the Pacific islands of Tonga and Vanuatu between 2,330 and 3,100 years ago. “[A group of] people from Taiwan rowed out into the ocean, and didn’t mix with the people who had lived in New Guinea for much longer than anyone had thought,” says lead author Pontus Skoglund from Harvard Medical School, USA, and Stockholm University, Sweden.

Bushmen Painted Earliest Rock Art in Southern Africa 5,000 Years Ago. They may now be underwater, but the oldest rock art paintings in southern Africa are about 5,000 years old, far more ancient than previously realized, a new study finds. 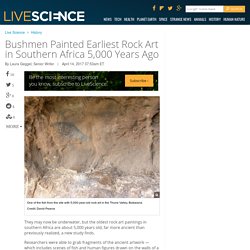 Researchers were able to grab fragments of the ancient artwork — which includes scenes of fish and human figures drawn on the walls of a naturally occurring rock shelter— before a newly constructed dam in Botswana unleashed a torrent of water over it, they said. The researchers then used a novel technique to isolate the paint fragments before dating them, as well as 13 other fragments from rock art sites across southern Africa, including in Lesotho and South Africa. [See Photos of Ancient Rock Art from Botswana and other Southern African Countries] Error loading player: No playable sources found. Travel - The most sophisticated people you never knew. The clouds passing over the island of Papa Westray graciously withheld their rain as I piled together dry wood, grass and seaweed. Setting a small pocket of dry thistle into the centre, I got to work with a handmade kit made up of two sticks, a reed bow and a bivalve shell – trying to convert muscle power into friction and friction into fire.

If I could make enough heat to generate an ember, I’d have to transport it quickly into the thistle floss, where it could smoulder. Theconversation. In the recently released horror movie Raw, a lifelong vegetarian teenager arrives at a veterinary school and, after being forced to consume a rabbit kidney at a student initiation ritual, discovers a deep desire to eat human flesh.

Most of us are fascinated with cannibalism – and there are many examples of brutal and dark dramas exploring the topic, including Silence of the Lambs and Hannibal. But in real life, cannibalism hasn’t just been practised by bloodthirsty psychopaths. Common motivations for eating human flesh include periods of starvation, warfare and ritualistic behaviour. And it hasn’t been all that uncommon – many of our ancestors were actually cannibals. Steppe migrant thugs pacified by Stone Age farming women – HeritageDaily. Research suggests that large demographic changes during the first part of the Bronze Age happened as a result of massive migrations of Yamnaya people from the Pontic-Caspian steppes into Neolithic Europe. They were also able to show that plague was widespread in both Europe and Central Asia at this time. Corded ware vessel, an axe and two discs made of amber from an early male grave. Credit: Danish National Museum. New archaeological evidence throws light on efforts to resist ‘the living dead’ – HeritageDaily.

Research suggests that large demographic changes during the first part of the Bronze Age happened as a result of massive migrations of Yamnaya people from the Pontic-Caspian steppes into Neolithic Europe. They were also able to show that plague was widespread in both Europe and Central Asia at this time. Corded ware vessel, an axe and two discs made of amber from an early male grave. Credit: Danish National Museum Now Professor Kristiansen and Professor Willerslev with co-authors reveal a more detailed view of the mechanism behind the emerging culture known as the Corded Ware Culture — the result of the encounter between the Yamnaya and the Neolithic people.

Professor Kristian Kristiansen says: “We are now for the first time able to combine results from genetics, strontium isotopes on mobility and diet, and historical linguistics on language change, to demonstrate how the integration process unfolded on the ground after the Yamnaya migrations from the steppe. Mouse in the house tells tale of human settlement – HeritageDaily. Neanderthal Dental Plaque Shows What a Paleo Diet Really Looks Like - The Atlantic.

Updated on March 9 at 18:35 p.m. ET. Neanderthals may have self-medicated with painkillers and penicillin. You can learn a lot about someone by their smile, and new research has taken that approach to study the true paleo diet. How to track down your ancestry with DNA. Collapse of Aztec Society Linked to Catastrophic Salmonella Outbreak. Bettmann/Getty. Humans May Have Arrived in North America 10,000 Years Earlier Than We Thought. Homo neanderthalensis – A Misunderstood Hominin Species – HeritageDaily. Paying a heavy price for loving the Neanderthals. Did cavemen use toothpicks? Researchers say they've found evidence that ancient human relatives used toothpicks. Archaeologists Find Traces of Human Organs and Disease in Iron-Age Pottery. Shattered pots and other artifacts have much to teach us about vanished civilizations, but, sometimes, it’s what’s inside that counts.

Genetic data does not support ancient trans-Atlantic migration, professor says. Denisovan. Future - This is how to store human knowledge for eternity. Ice Age Babies Buried in Alaska Reveals Early Genetic Diversity in North America. Underwater Fossil Graveyard Reveals Toll of Human-Caused Extinction. Early humans had to become more feminine before they could dominate the planet. Early humans lived with Neanderthal neighbours. Our fossil find suggests humans spread to Asia way before they got to Europe. Charting culture. Can paleogenetics tell us about prehistory? – Jacob Mikanowski. The mummy cheese. The oldest case of decapitation in the Americas. Gladiator Fights Revealed in Ancient Graffiti.

Americans sorting themselves into politically similar counties. Scandinavians are the earliest Europeans. 15 Medieval Hygiene Practices That Might Make You Queasy - Answers.com. 45,000-Year-Old Man's Genome Sequenced. Getting the Chinese to work in teams. Things that shouldn't still exist. Ancient Egyptian Woman with 70 Hair Extensions Discovered. What you can tell about a country’s future by looking at its gender balance. How Companies Are Appealing To Millennials. Society bloomed with gentler personalities, more feminine faces: Technology boom 50,000 years ago correlated with less testosterone. Plastic Legacy: Humankind's Trash Is Now a New Rock. Why Americans Are the Weirdest People in the World. World's Oldest Masks Show Creepy Human Resemblance.