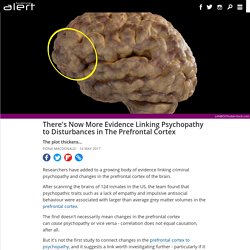 After scanning the brains of 124 inmates in the US, the team found that psychopathic traits such as a lack of empathy and impulsive antisocial behaviour were associated with larger than average grey matter volumes in the prefrontal cortex. The find doesn't necessarily mean changes in the prefrontal cortex can cause psychopathy or vice versa - correlation does not equal causation, after all. Bacteria could be responsible for shifts in brain structure in people with IBS. We've known for a while now that the relationship between our gut's microbes and the painful condition, irritable bowel syndrome (IBS), actually stretches all the way up into our brains. 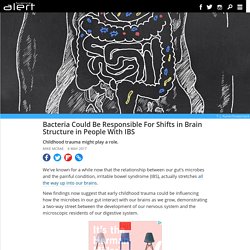 New findings now suggest that early childhood trauma could be influencing how the microbes in our gut interact with our brains as we grow, demonstrating a two-way street between the development of our nervous system and the microscopic residents of our digestive system. Emeran Mayer from the University of California, Los Angeles, has been studying the connection between the gut's microorganisms and our nervous system for years. "Discovering structural changes in the brain, whether they are primary or secondary to the gastrointestinal symptoms, demonstrates an 'organic' component to IBS and supports the concept of a brain-gut disorder," Mayer explained back in 2010. 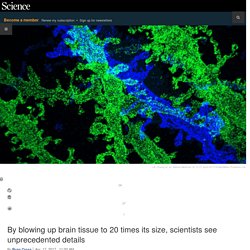 Just imagine what scientists could see if they could also make things bigger. A new strategy to blow brains up does just that. Researchers previously invented a method for injecting a polyacrylate mesh into brain tissue, the same water-absorbing and expanding molecule that makes dirty diapers swell up. Just add water, and the tissue enlarges to 4.5 times its original size. But it wasn’t good enough to see everything. Atomic structure reveals how cells translate environmental signals. Researchers at the RIKEN Brain Science Institute have determined the atomic resolution structure of a key molecule that translates signals from a cell's local environment into a language that the cell can understand and use. 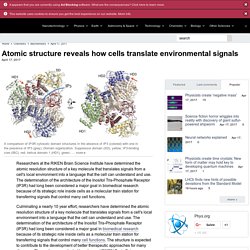 The determination of the architecture of the Inositol Tris-Phosphate Receptor (IP3R) had long been considered a major goal in biomedical research because of its strategic role inside cells as a molecular train station for transferring signals that control many cell functions. Culminating a nearly 10 year effort, researchers have determined the atomic resolution structure of a key molecule that translates signals from a cell's local environment into a language that the cell can understand and use. In all living cells, chemical signals are harnessed for intracellular communication. Entire nervous system of an animal recorded for the first time. Stefan Siebert and Charles David By Niall Firth The firing of every neuron in an animal’s body has been recorded, live. 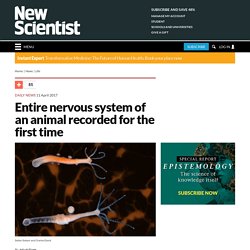 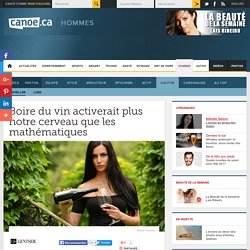 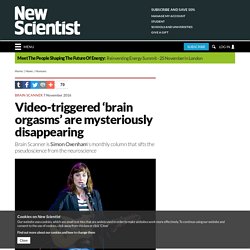 The comedian, best known for playing Dobbie in the British sitcom Peep Show, is one of many people who experience autonomous sensory meridian response (ASMR) – a tingly feeling often elicited by certain videos or particular mundane interactions. Growing up, Suttie says she had always assumed everyone felt it too. Not everyone feels it, but Suttie is by no means alone. Elon Musk just launched Neuralink - a venture to merge the human brain with AI. 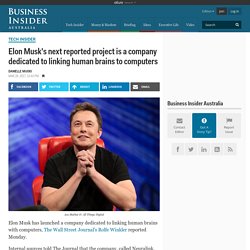 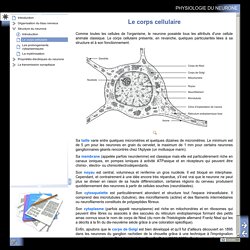 Le corps cellulaire présente, en revanche, quelques particularités liées à sa structure et à son fonctionnement. The Science of the Rorschach Blots - Neuroskeptic. When the psychiatrist Hermann Rorschach blotted ink onto paper to produce a series of abstract patterns, could he have known that nearly 100 years later, the Rorschach test would be a household name? 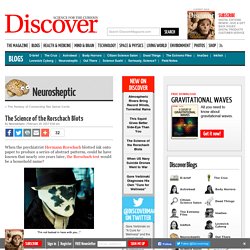 Although the use of the Rorschach to diagnose mental illness is mostly a thing of the past, research on the test continues. Last week, two new papers were published on the Rorschach blots, including a fractal analysis of the images themselves and a brain scanning study using fMRI. The fractal analysis comes from Taylor et al. of the University of Oregon, Eugene. This New Deceptively Simple Equation Might Finally Unite The Two Biggest Theories In Physics. One of the most famous problems in modern physics today is that our two of the finest theories to understand the Universe - quantum mechanics and general relativity - work flawlessly well on their own realm, but when you try to chain them, the maths just doesn’t work out.

AI learns to solve quantum state of many particles at once. Art Box Images/Getty By Jennifer Ouellette. Mini-brains made from teeth help reveal what makes us sociable. Alysson Renato Muotri By Andy Coghlan Can tiny brains grown in a dish reveal the secrets of sociability? Balls of brain tissue generated from stem cells are enabling us to understand the underlying differences between people who struggle to be sociable and those who have difficulty reining themselves in. Alysson Muotri at the University of California, San Diego, and his team created the mini-brains by exposing stem cells taken from the pulp of children’s milk teeth to cocktails of growth factors that help them mature. Does Poverty Shape the Brain? Psychiatrists Must Face Possibility That Medications Hurt More Than They Help - Scientific American Blog Network. Two new posts on this website have me contemplating, once again, the terrible possibility that psychiatry is hurting more people than it helps.

Reporter Sarah G. Miller notes in “1 in 6 Americans Takes a Psychiatric Drug” that prescriptions for mental illness keep surging. As of 2013, almost 17 percent of Americans were taking at least one psychiatric drug, up from 10 percent in 2011, according to a new study. Miller elaborates: “Antidepressants were the most common type of psychiatric drug in the survey, with 12 percent of adults reporting that they filled prescriptions for these drugs… In addition, 8.3 percent of adults were prescribed drugs from a group that included sedatives, hypnotics and anti-anxiety drugs, and 1.6 percent of adults were given antipsychotics.” 11 TED Talks that show how weird the human mind really is. These talks will make you think about thinking.TED We use our mind every second of every day, but it's safe to say no one understands exactly how it functions.

Even psychologists and neuroscientists are often stumped by why we think and behave the way we do. Some of those researchers have appeared on the TED stage to talk about the questions that keep them up at night. People with autism have unusually symmetrical brains, new scans reveal. Brain connections in people with autism spectrum disorder (ASD) show more symmetry across the right and left hemispheres, suggesting that tasks are being divvied up in the brain in a very different manner from those without autism.

The find, which is based on new brain scans of young people with autism, could explain why one of the hallmarks of the condition is an innate skill for identifying specific details in something, but a failure to put them into a wider context. As researchers from the San Diego State University explain, the left and right hemispheres of the brain process information in very different ways, and how the brain as a whole mitigates this could help us better understand how people with autism spectrum disorder see the world. Studies have shown that the left hemisphere plays a much larger role in language processing and speaking than the right hemisphere, whereas the right hemisphere tends to focus on auditory and visual stimuli.

Cambridge Scientists: We Shouldn't Define Intelligence According to Humanity. A Limited View When we try to figure out how some aspect of thinking works, we always start looking at how the human brain does it. But while humans could be said to be the apex species in this planet, we are far from being the only ones who can think. Take for example chimpanzees, a staple for arguments for intelligent thinking in animals. When you compare them with other similar primates like bonobos, you see that they are more inclined towards tool-use. Not only do bonobos not use tools as much, young chimpanzees also manipulate objects more than young bonobos. You also start seeing active intelligence in some species when comparing the actions of say, digger wasps and corvids (crows, magpies, rooks, etc). Stroke Survivor Walks Again After Doctors Inject Stem Cells Directly into Brain. In Brief. How Network Neuroscience Is Creating a New Era of Mind Control.

Mais le microbiote joue-t-il aussi un rôle dans le développement de troubles psychiatriques ? Study shows people who aren't moved by music have less functional connectivity between some brain regions. (Medical Xpress)—A team of researchers from Spain and Canada has found evidence that suggests people who are not emotionally moved by music have less connectivity between the regions in the brain responsible for processing sounds and those involved in managing emotions. We were wrong about consciousness disappearing in dreamless sleep, say scientists. When it comes to dreamlessness, conventional wisdom states that consciousness disappears when we fall into a deep, dreamless sleep. Scientists say they've identified the physical source of depression in the brain. The region of the brain that serves as the physical source of feelings of depression has been identified, with new MRI data being the latest evidence to show that depression isn't just a 'frame of mind'.

Évolution du cerveau et des capacités cognitives des Hominidés fossiles. Colloque sur l'évolution du cerveau. Boobs GIFs: 31 Of The Hottest Animated GIFs That You'll Ever See. Colloque sur l'évolution du cerveau. 7 Strange Facts about the 'Mind-Control' Parasite Toxoplasma Gondii. By Stephanie Bucklin, Live Science Contributor | Credit: CDCCan a parasite control your mind? A single-cell parasite, Toxoplasma gondii, is perhaps best-known for its connection to cats. The parasite can move from its feline host to humans, most commonly through contact with cat feces. And while the parasite typically only causes mild infection (people may have flulike symptoms), in people with weakened immune systems, infections can cause serious problems, from seizures to severe lung problems. Earth - What Neanderthals' healthy teeth tell us about their minds. Big Pharma's Manufactured Epidemic: The Misdiagnosis of ADHD. Researchers think they know how to make your brain learn like a kid again.