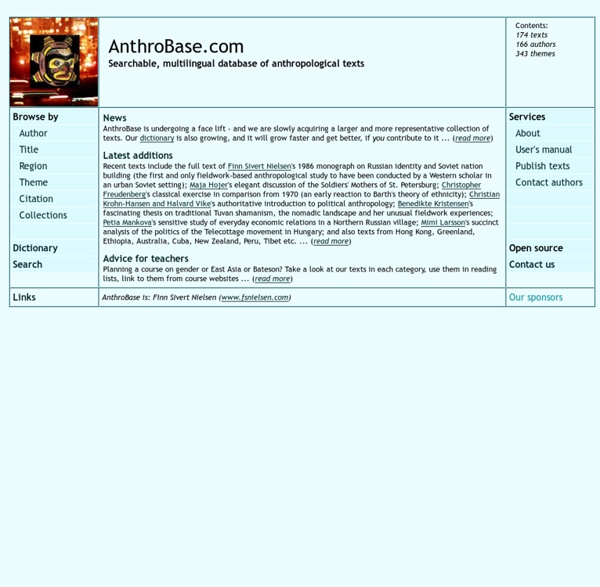 The Politics of Ontology: Anthropological Positions — Cultural Anthropology At first blush, “ontology” and “politics” make strange bedfellows. Ontology evokes essence, while politics, as modern, democratic, multiculturalist citizens tend to understand it, is about debunking essences and affirming in their stead the world-making capacities of human collectives. Yet this notion of a social construction of reality itself instantiates a particular ontology, and a powerful one at that—and here we also mean politically powerful. Still, as anthropologists we are attuned to the “powers of the weak”—to the many complex connections, some of them crucially negative, between power differences (politics) and the powers of difference (ontology). How might “the otherwise” be rendered manifest ethnographically? Here, we need to remind ourselves that ethnographic descriptions, like all cultural translations, necessarily involve an element of transformation or even disfiguration. Notes References Alberti, Benjamin, and Yvonne Marshall. 2009. Bryant, Levi R. 2011. Candea, Matei.

Written in Bone - A Highly Unusual Case In 2002, archaeologists uncovered an isolated grave just outside the log wall of a fort built on an island in the James River almost four centuries earlier. Who was buried there? Male skeleton (burial partially re-created for an exhibition) 1607, James Fort site, Jamestown Virginia. Image courtesy of: APVA Preservation Virginia/Historic Jamestowne The discovery mystified investigators. Unlike nearly all the other early fort burials they had found, this one once held a coffin. Smithsonian forensic anthropologists joined archaeologists from APVA Preservation Virginia who were excavating the site where the fort once stood—the first permanent English settlement in North America. A computer-generated image of the burial, based on evidence of nails recovered from the grave. Evidence at the Scene A gabled coffin and captain’s staff placed next to it indicate that the colonists who buried this man held him in high regard. Skeletal Evidence A Probable ID A Captain, No Longer Nameless

Social Research Methods 6 Ways to Hook Your Readers Although I consider myself an avid reader, I must admit I have a short attention span when it comes to getting into books. If you fail to grab my attention in the first few lines, I start spacing out. Most readers are like me. Most people don’t want to spend the first 50 pages trying to get into a book. Here are a few things I find annoying in the first lines of a story: Dialogue. The last thing you want to do as a writer is annoy or bore people. (N.B. 1. Put a question in your readers’ minds. “Those old cows knew trouble was coming before we did.” 2. By starting at an important moment in the story, your reader is more likely to want to continue so he or she can discover what will happen next. “It was dark where she was crouched but the little girl did as she’d been told.” 3. Description is good when it encourages people to paint a picture in their minds. “Last night I dreamt I went to Manderley again.” 4. 5. “They had flown from England to Minneapolis to look at a toilet.” 6.

New Hypothesis for Human Evolution and Human Nature & Eberly College of Science Click on image for a high-resolution version. Domestic animals, like this water buffalo in Viet Nam, live intimately with humans and provide renewable resources to humans that communicate well with them. Photo by Greg Luna. 20 July 2010 — It's no secret to any dog-lover or cat-lover that humans have a special connection with animals. "Establishing an intimate connection to other animals is unique and universal to our species," said Shipman, a professor of biological anthropology. In addition to describing her theory in the scientific paper, Shipman has authored a book for the general public, now in press with W. These carvings are from ivory and have been dated to between 30,000 - 36,000 years old, making them the oldest artworks in Europe. Shipman suggests that the animal connection was prompted by the invention of stone tools 2.6-million years ago. Click on image for high-resolution version. [ Kevin Stacey ]

The Tarahumaras: An Endangered Species : Mexico Culture & Arts Shep Lenchek Never conquered by the Aztecs and despite being defeated by Mexican armies, the Tarahumaras still consider themselves an independant nation. So strong is this conviction that in the Fifties they more than once took complaints directly to the United Nations. Perhaps the purest and most unmixed of any Indian tribe in Mexico, so little is known about them that their true name "Raramuri" was corrupted to "Tarahumara" by white men and never corrected. Most of the world knows them only as long distance runners. Living in high altitudes, they have developed tremendous lung capacity and in more primitive times hunted deer and mountain goats, running them down on foot. However, this running ability is only one facet of their life style. Psychologists suggest that over the centuries this value system has actually caused physiological changes in their brain that preclude speaking anything but the truth. Luis G. God is both Father and Mother.

Social Science Research Network (SSRN) Home Page Creative Writing Exercises -- Creative Writing Exercises for Craft No matter what stage you're at with your writing, it's always beneficial to work on craft and technique. These creative writing exercises target common problems and weaknesses. Switch Point of View Both first person and third person have their strengths and weaknesses; what works for one story may not work for another. This creative writing exercise will help you observe the effect of writing in the point of view that's less familiar to you. A Day Without Modifiers While modifiers -- adjectives and adverbs -- can add to a story, too many, or the wrong ones, can bog down your prose and lead to weaker nouns and verbs. Avoid Back Story Unlike the other creative writing exercises on this list, this one asks you to work in another genre. Listening for Dialogue Not everyone starts out with an ear for dialogue, but fortunately it can be developed, like any other skill. Description Creative Writing Exercise Who's the most memorable person you've ever met?

- StumbleUpon Studies have shown that meditating regularly can help relieve symptoms in people who suffer from chronic pain, but the neural mechanisms underlying the relief were unclear. Now, MIT and Harvard researchers have found a possible explanation for this phenomenon. In a study published online April 21 in the journal Brain Research Bulletin, the researchers found that people trained to meditate over an eight-week period were better able to control a specific type of brain waves called alpha rhythms. “These activity patterns are thought to minimize distractions, to diminish the likelihood stimuli will grab your attention,” says Christopher Moore, an MIT neuroscientist and senior author of the paper. “Our data indicate that meditation training makes you better at focusing, in part by allowing you to better regulate how things that arise will impact you.” A 1966 study showed that a group of Buddhist monks who meditated regularly had elevated alpha rhythms across their brains.