An anthropology of video games. It’s difficult to describe why we play video games, but it’s forever to someone’s ire that we do – or rather, that I play them, AND that I explain why as a means of justification. 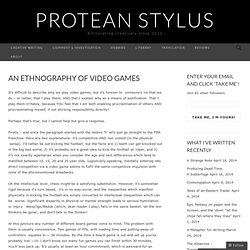 That I play them irritates, because YOU feel that I am both enabling procrastination of others AND procrastinating myself, if not shirking responsibility directly! Perhaps that’s true, but I cannot help but give a response. Firstly – and since the paragraph started with the letters ‘fi’ let’s just go straight to the FIFA franchise. Here are two explanations: it’s competitive AND non violent (in the physical sense). I’d rather be out kicking the football, but the facts are 1) teeth can get knocked out in the big bad world, 2) it’s probably not a great idea to kick the football at 10pm, and 3) it’s not exactly egalitarian when you consider the age and skill differences which tend to manifest between 10, 15, 20 and 25 year olds. On the intellectual level, chess might be a satisfying substitution. Anthropological Video Games. A cluster of teen-agers gathered around a small table, and passersby could hear them exclaim, “Asian! 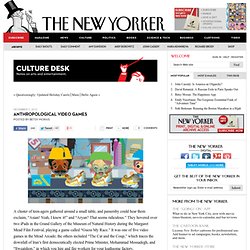 Yeah, I knew it!” And “Aryan? That seems ridiculous.” They hovered over two iPads in the Grand Gallery of the Museum of Natural History during the Margaret Mead Film Festival, playing a game called “Guess My Race.” It was one of five video games in the Mead Arcade; the others included “The Cat and the Coup,” which traces the downfall of Iran’s first democratically elected Prime Minister, Mohammad Mossadegh, and “Sweatshop,” in which you hire and fire workers for your loathsome factory. Aiding the swarms of museum patrons who stopped to play were volunteers from Games for Change, a New York City-based nonprofit that encourages the development of what it calls “social-impact games.”

I selected an adult worker, rather than a child, to box up hats on the assembly line, and asked the volunteer, “Do you find that most people choose children to work?” “By the end, you have to,” she said. American Anthropological Association. The Game Anthropologist. Kevin Sultan's Blog - Psychological anthropology in video games. The following blog post, unless otherwise noted, was written by a member of Gamasutra’s community. 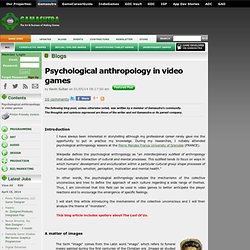 The thoughts and opinions expressed are those of the writer and not Gamasutra or its parent company. Introduction I have always been interested in storytelling although my professional career rarely gave me the opportunity to put in practice my knowledge. During my researches, I notably attended psychological anthropology lessons at the Pierre Mendes France University of Grenoble (FRANCE). Wikipedia defines the psychological anthropology as "an interdisciplinary subfield of anthropology that studies the interaction of cultural and mental processes. In other words, the psychological anthropology analyzes the mechanisms of the collective unconscious and tries to define the approach of each culture regarding a wide range of themes.

I will start this article introducing the mechanisms of the collective unconscious and I will then analyze the theme of "monsters". A matter of images. Video games as applied anthropology. Details Category: Nicolas' Blog Published on Wednesday, 17 November 2010 23:00 Written by Nicolas Baumard Pursuing its ambitious development, the ICCI blog has decided now to open a "video games" section. 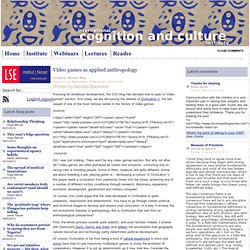 And today, we are discussing the release of Civilization V, the last sequel of one of the most famous series in the history of video games. {source} {/source} OK I was just kidding. Of course, one could argue that the view developed in Civilization is quite unrealistic, reductionist and deterministic. First, the whole process sounds quite realistic, and even familiar. Of course, Civilization is far from being a kind of natural experiment in silico (but some have tried to use massively multiplayer games to study the evolution of cooperation). Finally, one could oppose the western or eurocentric vision of the world in which Europe or America's civilization stand as the final stage of civilization.

An Anthropology of Video Games.