The Surprisingly Devious History of CAPTCHA. Life in the Information Age changes so fast and so often that we often don’t even notice. 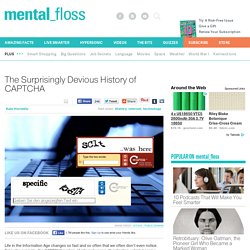 Take, for example, the CAPTCHA system of internet user authentication, which became ubiquitous, then kind of sinister, then began to fade away. The word CAPTCHA is an acronym for “Completely Automated Public Turing test to tell Computers and Humans Apart.” The original system was developed in the early 2000s by engineers at Carnegie Mellon University. Beau Lotto – Understanding Perception: How We Experience the Meaning We Create.

Social Media Is Redefining 'Depression' - Anne-Sophie Bine. A few months ago, Laura U., a typical 16-year-old at an international school in Paris, sat at her computer wishing she looked just like the emaciated women on her Tumblr dashboard. 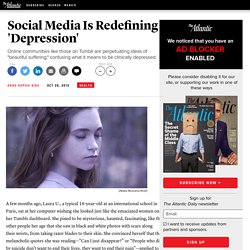 Selfies, Sexts and Sneaky Hats: Young People's Understandings of Gendered Practices of Self-Representation. Thinking with selfies. Why Do We Share Viral Videos? Instagram and the Cult of the Attention Web: How the Free Internet is Eating Itself — RE: Write. Time is more precious than money. 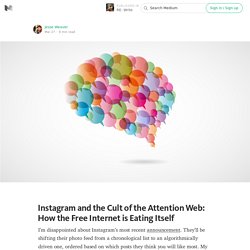 Money is a renewable resource. Everyone always has the potential to make more money. We should be talking about torture in VR – Versions. Will the Internet of Things set family life back 100 years? This article is part of The Design Economy series. 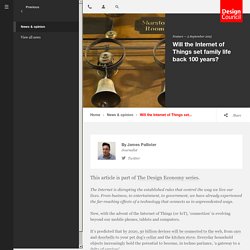 The Internet is disrupting the established rules that control the way we live our lives. From business, to entertainment, to government, we have already experienced the far-reaching effects of a technology that connects us in unprecedented ways. Now, with the advent of the Internet of Things (or IoT), ‘connection’ is evolving beyond our mobile phones, tablets and computers. It’s predicted that by 2020, 50 billion devices will be connected to the web, from cars and doorbells to your pet dog’s collar and the kitchen stove. Everyday household objects increasingly hold the potential to become, in techno parlance, ‘a gateway to a delta of services’. Accessing the Inaccessible: Evolving Search. We calculated the year dead people on Facebook could outnumber the living. By the end of this century, Facebook might start to feel more like a digital graveyard than a place for the living. 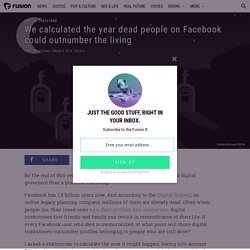 Facebook has 1.5 billion users now. And according to the Digital Beyond, an online legacy planning company, millions of them are already dead. Often when people die, their loved ones turn their profiles into memorials, digital tombstones that friends and family can revisit in remembrance of their life. If every Facebook user who dies is memorialized, at what point will those digital tombstones outnumber profiles belonging to people who are still alive? I asked a statistician to calculate the year it might happen, taking into account Facebook’s growth, demographic data about its existing global users and death rates from the Centers for Disease Control.

What happens to Twitter bots when their makers die. There’s no good way to ask people if they think Twitter will outlive them. 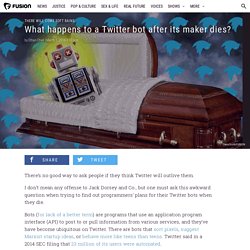 I don’t mean any offense to Jack Dorsey and Co., but one must ask this awkward question when trying to find out programmers’ plans for their Twitter bots when they die. Bots (for lack of a better term) are programs that use an application program interface (API) to post to or pull information from various services, and they’ve have become ubiquitous on Twitter. There are bots that sort pixels, suggest Marxist startup ideas, or behave more like teens than teens. Twitter said in a 2014 SEC filing that 23 million of its users were automated. Daniel Miller presents the results of the Why We Post project. Modern Romance: a book by Aziz Ansari & Eric Klinenberg. Science Of Us: It’s Almost Weirder When Online Daters Don’t Lie. A recent edition of Vows, the wedding-announcements section of the New York Times, featured a sadly familiar fact about modern dating: the groom wooed his now-wife with a fib. 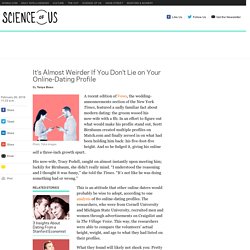 In an effort to figure out what would make his profile stand out, Scott Birnbaum created multiple profiles on Match.com and finally zeroed in on what had been holding him back: his five-foot-five height. Science of us: The Scientific Case for Instagramming Your Food. The most important thing about a good food picture, as any amateur food photographer can tell you, is natural light. 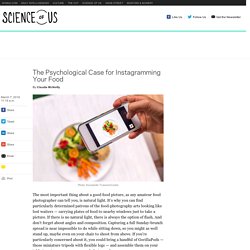 It’s why you can find particularly determined patrons of the food-photography arts looking like lost waiters — carrying plates of food to nearby windows just to take a picture. If there is no natural light, there is always the option of flash. Why is the internet such a creepily haunted place? —... Internet outrage, explained. One of the most common human behaviors is also one of our most perplexing: Our tendency to get all worked up about other people's business. 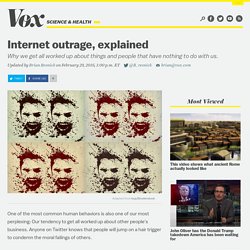 Anyone on Twitter knows that people will jump on a hair trigger to condemn the moral failings of others. Perhaps you'll remember when Justine Sacco, a former communications director with IAC, tweeted this: "Going to Africa. Hope I don’t get AIDS. Weird Twitter: The Oral History.