GitHub - alastair-JL/AnthroTools: Some R tools for use in Anthropology. Systematic Kinship Terminologies. The Hawaiian system is the least descriptive and merges many different relatives into a small number of categories. 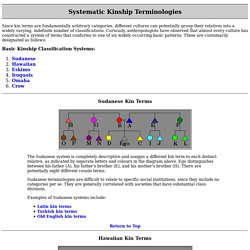 Ego distinguishes between relatives only on the basis of sex and generation. Thus there is no uncle term; (mother's and father's brothers are included in the same category as father). All cousins are classified in the same group as brothers and sisters. Lewis Henry Morgan, a 19th century pioneer in kinship studies, surmised that the Hawaiian system resulted from a situation of unrestricted sexual access or "primitive promiscuity" in which children called all members of their parental generation father and mother because paternity was impossible to acertain. Anthropologists now know that there is no history of such practices in any of the cultures using this terminology and that people in these societies make behavioural, if not linguistic, distinctions between their actual parents and other individuals they may call "father" or "mother". Actual Hawaiian terms . Introducing Ethiopian folk dance: Mocha Ethiopia Dance Group (English site)

Ethiopia has over 80 ethnic groups in the country, and each group has a very unique step and rhythm. 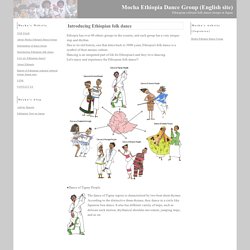 Due to its old history, one that dates back to 3000 years, Ethiopia's folk dance is a symbol of their mosaic culture. Dancing is an integrated part of life for Ethiopian's and they love dancing. Let's enjoy and experience the Ethiopian folk dance!! ●Dance of Tigray People The dance of Tigray region is characterized by two-beat drum rhymes. ●Dance of Amhara People The dance of people in Amhara region (Northern Ethiopia) is called “Eskesta” which has unique movement of neck, shoulder and chest. ●Dance of Somali People In eastern Ethiopia, people living near the border to Somalia are Muslims. Teaching the Anthropology of Dance. Goody on the Differences between Orality and Literacy   Cambridge Anthropologist Jack Goody writes about some of the differences between oral and literate societies: The written word does not replace speech, any more than speech replaces gesture. 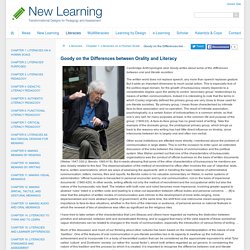 But it adds an important dimension to much social action. This is especially true of the politico-legal domain, for the growth of bureaucracy clearly depends to a considerable degree upon the ability to control ‘secondary group’ relationships by means of written communications. Indeed it is interesting to note that the terms in which Cooley originally defined the primary group are very close to those used for pre-literate societies.

‘By primary group, I mean those characterised by intimate face-to-face association and co-operation. Other social institutions are affected more directly. Much of the discussion and much of our thinking about other cultures has been based on the misinterpretation of the nature of oral ‘tradition’. 100 of the Most Influential Ethnographies and Anthropology Texts. Wisdom from the Society for the Anthropology of Food and Nutrition. Neuroanthropology: Understanding the encultured and brain and body. ANTHROPOLOGY FOR BEGINNERS. Sound archives of the CNRS and the Musee de l'Homme. Research Centre of Ethnomusicology (CREM), University of Paris 10 - Telemeta. AnthroBase - Social and Cultural Anthropology - A searchable database of anthropological texts. 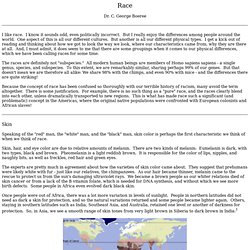 I know it sounds odd, even politically incorrect. But I really enjoy the differences among people around the world. One aspect of this is all our different cultures. But another is all our different physical types. I get a kick out of reading and thinking about how we got to look the way we look, where our characteristics came from, why they are there at all. The races are definitely not "subspecies. " Because the concept of race has been confused so thoroughly with our terrible history of racism, many avoid the term altogether.

Skin Speaking of the "red" man, the "white" man, and the "black" man, skin color is perhaps the first characteristic we think of when we think of race. Skin, hair, and eye color are due to relative amounts of melanin. The experts are pretty much in agreement about how the varieties of skin color came about. Once people were out of Africa, there was a lot more variation in levels of sunlight. Hair Eyes Blood Genes Another approach uses the term lineages. Anthropologie Ethnologie Archéologie. Anthropology - Download free content from Oxford University.