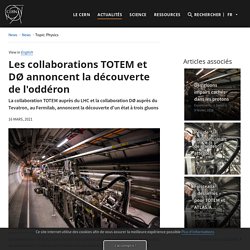 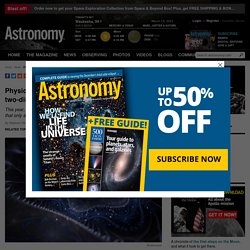 First predicted by theorists in the early 1980s, these particle-like objects only arise in realms confined to two dimensions, and then only under certain circumstances — like at temperatures near absolute zero and in the presence of a strong magnetic field. Physicists are excited about anyons not only because their discovery confirms decades of theoretical work, but also for practical reasons. For example: Anyons are at the heart of an effort by Microsoft to build a working quantum computer. This year brought two solid confirmations of the quasiparticles. Physicists attempt to unify all forces of nature and rectify Einstein's biggest failure. In his waning years, Albert Einstein spent his time tilting at windmills, trying to unify all the forces of nature. 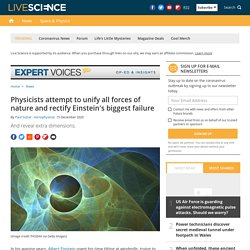 He died disappointed, and his attempt would go down in history as his biggest failure. But Einstein's failed dream could ultimately become his ultimate triumph, as a small group of theoretical physicists rework his old ideas. It won't necessarily bring all the forces of the universe together, but it could explain some of the most pressing issues facing modern science. Strongly correlated Chern insulators in magic-angle twisted bilayer graphene. 1.Rachel, S. 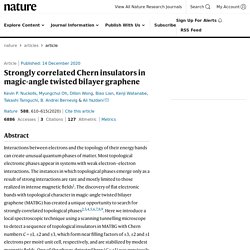 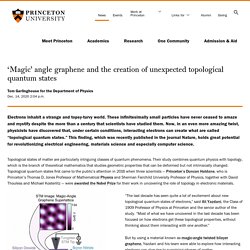 These infinitesimally small particles have never ceased to amaze and mystify despite the more than a century that scientists have studied them. Now, in an even more amazing twist, physicists have discovered that, under certain conditions, interacting electrons can create what are called “topological quantum states.” This finding, which was recently published in the journal Nature, holds great potential for revolutionizing electrical engineering, materials science and especially computer science. Five mysteries the Standard Model can’t explain. The Standard Model is a thing of beauty. 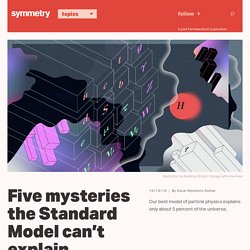 It is the most rigorous theory of particle physics, incredibly precise and accurate in its predictions. It mathematically lays out the 17 building blocks of nature: six quarks, six leptons, four force-carrier particles, and the Higgs boson. These are ruled by the electromagnetic, weak and strong forces. “As for the question ‘What are we?’ The Standard Model has the answer,” says Saúl Ramos, a researcher at the National Autonomous University of Mexico (UNAM). For the past 50 years such a system has allowed scientists to incorporate particle physics into a single equation that explains most of what we can see in the world around us. Despite its great predictive power, however, the Standard Model fails to answer five crucial questions, which is why particle physicists know their work is far from done. The many paths of muon math.

Like racecars on a track, thousands of particles called muons zip around an experiment’s giant 50-foot circular magnet at 99.9% of the speed of light. 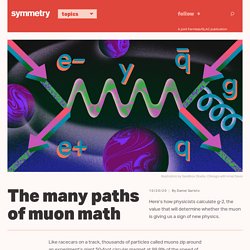 After making a few hundred laps in less than a millisecond, the muons decay and are soon replaced by another bunch. The goal of the experiment, Fermilab Muon g-2, is to better understand the properties of muons, which are essentially heavier versions of electrons, and use them to probe the limitations of the Standard Model of particle physics.

Specifically, physicists want to know about the muons’ “magnetic moment”—that is, how much do they rotate on their axes in a powerful magnetic field— as they race around the magnet? In 2001, an experiment at the US Department of Energy’s Brookhaven National Lab found that the muons turned more than theory predicted. LHC creates matter from light. The Large Hadron Collider plays with Albert Einstein’s famous equation, E = mc², to transform matter into energy and then back into different forms of matter. 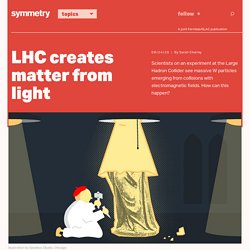 But on rare occasions, it can skip the first step and collide pure energy—in the form of electromagnetic waves. Last year, the ATLAS experiment at the LHC observed two photons, particles of light, ricocheting off one another and producing two new photons. This year, they’ve taken that research a step further and discovered photons merging and transforming into something even more interesting: W bosons, particles that carry the weak force, which governs nuclear decay. First sighting of mysterious Majorana fermion on a common metal. Physicists at MIT and elsewhere have observed evidence of Majorana fermions—particles that are theorized to also be their own antiparticle—on the surface of a common metal: gold. 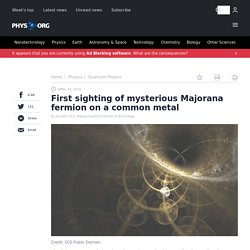 This is the first sighting of Majorana fermions on a platform that can potentially be scaled up. The results, published in the Proceedings of the National Academy of Sciences, are a major step toward isolating the particles as stable, error-proof qubits for quantum computing. Did German physicists accidentally discover dark matter back in 2014? Could we have already discovered dark matter? 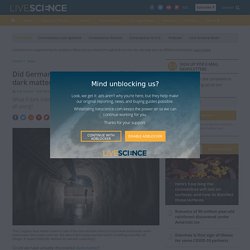 This physicist's ideas of time will blow your mind. Time feels real to people. But it doesn’t even exist, according to quantum physics. “There is no time variable in the fundamental equations that describe the world,” theoretical physicist Carlo Rovelli tells Quartz. La matière noire. This Genius Map Explains How Everything in Physics Fits Together. Physics is a huge, complex field. It also happens to be one of the most fascinating, dealing with everything from black holes and wormholes to quantum teleportation and gravitational waves. But unless you have an innate knowledge of the field, it's pretty hard to figure out how all these concepts actually fit together - and how they tie in with the stuff like the physics of inertia and circuits that we learnt in high school. Integrated Information Theory. L'infini de la matière : le vide. Physicists Discover That Strange 'Ferroelectric' Particles Actually Exist, And Could Change Computing.

Black holes from a previous universe shine light on our own. Cosmologists say they have found remnants of a bygone universe in the afterglow of the Big Bang found in the Cosmic Microwave Background (CMB). The discovery gives weight to the controversial theory of Conformal Cyclic Cosmology, or CCC, that suggests our universe is just one of many, built from the remains of a previous one in the Big Bang 13.6 billion years ago. The theory describes an eternal cycle of Big Bang events, repeating into the far distant future, the end of our universe giving rise to a new one. A team led by Oxford University mathematics emeritus Roger Penrose, a former collaborator of the late Stephen Hawking, claims in a new paper lodged on the preprint server arXiv to have found signs of so-called Hawking Points, anomalous high energy features in the CMB.

Penrose and colleagues say that these anomalies were made from the last moments of black holes evaporating through “Hawking radiation”. Bizarre Superfluid Has Negative Mass. Scientists have created a new superfluid that has a negative mass, meaning that if it's pushed to the right, it accelerates to the left and vice versa. The bizarre behavior may sound like a freakish violation of nature, but it is a phenomenon that physicists have seen hints of before.

However, this is the first time that negative mass has been demonstrated without ambiguity in a lab, said Han Pu, a theoretical physicist at Rice University who was not involved in the new research. The newly created material with negative mass is a type of Bose-Einstein condensate, in which individual atoms move as one object, the scientists wrote in the new study. New scale for electronegativity rewrites the chemistry textbook. Electronegativity is one of the most well-known models for explaining why chemical reactions occur. Now, Martin Rahm from Chalmers University of Technology, Sweden, has redefined the concept with a new, more comprehensive scale. His work, undertaken with colleagues including a Nobel Prize-winner, has been published in the Journal of the American Chemical Society. The theory of electronegativity is used to describe how strongly different atoms attract electrons. By using electronegativity scales, one can predict the approximate charge distribution in different molecules and materials, without needing to resort to complex quantum mechanical calculations or spectroscopic studies.

Dark matter detection may involve a pinch of salt. The quest to test quantum entanglement. Over 12 billion years ago, speeding particles of light left an extremely luminous celestial object called a quasar and began a long journey toward a planet that did not yet exist. More than 4 billion years later, more photons left another quasar for a similar trek. As Earth and its solar system formed, life evolved, and humans began to study physics, the particles continued on their way.

Antimatter seen in two places at once thanks to quantum experiment. All Things Neutrino. Already beyond the Standard Model. Tested and verified with ever increasing precision, the Standard Model of particle physics is a remarkably elegant way of understanding the relationships between particles and their interactions. But physicists know it’s not the whole story: It provides no answer to some puzzling questions, such as the identity of the invisible dark matter that constitutes most of the mass in the universe.

Weird signals in Antarctica could be hints of a new realm of physics. Laser beams have gravity and can warp the fabric of the universe. Dark matter vibes. A dark matter experiment scheduled to go online at the Canadian underground laboratory SNOLAB in the early 2020s will conduct one of the most sensitive searches ever for hypothetical particles known as weakly interacting massive particles, or WIMPs. First particle tracks seen at ProtoDUNE. The largest liquid-argon neutrino detector in the world has just recorded its first particle tracks, signaling the start of a new chapter in the story of the international Deep Underground Neutrino Experiment.

Collaboration and Sponsors - The Dark Energy Survey. Dark Energy Survey reveals most accurate measurement of dark matter structure in the universe. Connecting Higgs to Dark Matter. Quantum experiment in space confirms that reality is what you make it. Black hole–entanglement link could be simulated in lab, paper suggests.