History of the Human Race "The Truth" ~ Ascension Dictionary. August 25, 2017 RodrigoA Guardian Alliance (GA) = immense group of beings who reside in a myriad of locations in the Time Matrix. 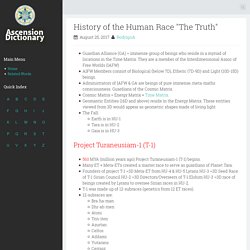 They are a member of the Interdimensional Assoc of Free Worlds (IAFW)AIFW Members consist of Biological (below 7D), Etheric (7D-9D) and Light (10D-15D) beings.Administrators of IAFW & GA are beings of pure immense, meta-maths consciousness. Guardians of the Cosmic Matrix.Cosmic Matrix = Energy Matrix + Time Matrix.Geomantic Entities (16D and above) reside in the Energy Matrix. Ancient Anunnaki Civilization Discovered In South Africa – This Changes History Forever! It has long been thought that the great pyramid of Giza is the most significant structure that is over 5000 years old, and the famous megalithic temples in Malta is substantial at over 3000 years old. 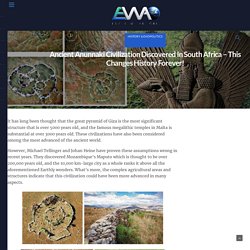 These civilizations have also been considered among the most advanced of the ancient world. However, Michael Tellinger and Johan Heine have proven these assumptions wrong in recent years. In Neanderthal DNA, Signs of a Mysterious Human Migration - The New York Times. The mystery only deepened in 2013. Another team of researchers retrieved mitochondrial DNA from a Neanderthal-like fossil at Sima de los Huesos, dating back 430,000 years.

The researchers had expected the DNA to resemble that of later Neanderthals in Europe. Instead, the mitochondrial DNA looked like it belonged to Denisovans — even though the Denisova cave was 4,000 miles away in Siberia. Last year, the researchers announced they had gathered a small fraction of the nuclear DNA from the same Sima de los Huesos fossil. That genetic material looked like it belonged to a Neanderthal, not a Denisovan. Dr. In 2013, one of Dr. Dr. Oldest Homo sapiens fossils discovered in Morocco. 300,000-year-old Homo sapiens skull reconstruction A composite reconstruction shows the earliest known Homo sapiens fossils found just west of Morocco at the archeological cave site called Jebel Irhoud. 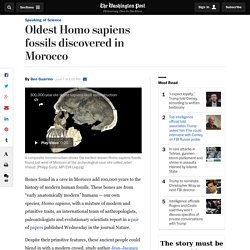 Researchers have just stumbled on a new, mysterious branch of humanity that was previously unknown. 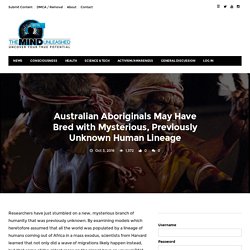 By examining models which heretofore assumed that all the world was populated by a lineage of humans coming out of Africa in a mass exodus, scientists from Harvard learned that not only did a wave of migrations likely happen instead, but that some of the oldest races on the planet have an unusual DNA makeup. These findings suggest that an entirely different branch of humans once lived on planet earth.

The change in timetables alone is enough of a disruption to previous scientific dogma. It was largely accepted that all people emigrated to other continents between 40,000 and 70,000 years ago. Rusty Stewart Aborigines are not alone, though. The Astonishing Age of a Neanderthal Cave Construction Site. In February 1990, thanks to a 15-year-old boy named Bruno Kowalsczewski, footsteps echoed through the chambers of Bruniquel Cave for the first time in tens of thousands of years. 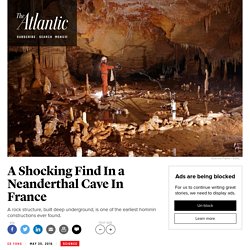 The cave sits in France’s scenic Aveyron Valley, but its entrance had long been sealed by an ancient rockslide. Kowalsczewski’s father had detected faint wisps of air emerging from the scree, and the boy spent three years clearing away the rubble. He eventually dug out a tight, thirty-meter-long passage that the thinnest members of the local caving club could squeeze through. The Astonishing Age of a Neanderthal Cave Construction Site. Humans Interbred With Hominins on Multiple Occasions, Study Finds. Sulawesi Island Stone Tools Predate Modern Humans Arrival. Scientific study claims: Human DNA carries a message from Extraterrestrials. According to scientists from Kazakhstan, the human DNA was encoded with an extraterrestrial signal by an advanced ancient alien civilization in the distant past. 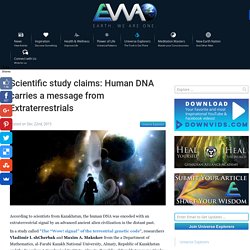 In a study called “The “Wow! Signal” of the terrestrial genetic code“, researchers Vladimir I. shCherbak and Maxim A. DNA sheds light on mysterious, big-toothed human relatives. This undated photo provided by the journal Nature shows a view from a rock above Denisova cave to the excavation field camp in in Altai Mountains of southern Siberia, Russia. 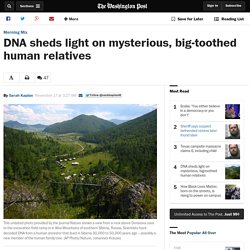 Scientists have decoded DNA from a human ancestor that lived in Siberia 30,000 to 50,000 years ago – possibly a new member of the human family tree. (AP Photo/Nature, Johannes Krause) Like a distant cousin you only know from stories, the Denisovans are just a hazy, hinted-at presence on the human family tree. We know they lived tens of thousands of years ago in a cave in Siberia’s craggy, ice-ensconced Altai Mountains. Teeth from China Reveal an Early Human Trek out of Africa. S. 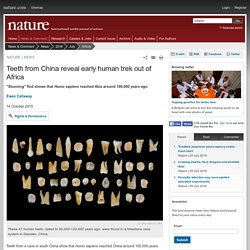 Xing and X-J. Wu These 47 human teeth, dated to 80,000-120,000 years ago, were found in a limestone cave system in Daoxian, China. Teeth from a cave in south China show that Homo sapiens reached China around 100,000 years ago — a time at which most researchers had assumed that our species had not trekked far beyond Africa. Nature Podcast. "Peking Man" Upper Cave and the Ethnic Variety of Lemurians, Part II. Geneticists are Spell-Bound By Discovery of DNA That Confirms Fallen Angels Mated With Humans! (Stunning Videos) Monday, June 23, 2014 12:25 The World Genographic Project has been testing haplogroups (a group which relates to our deep ancestry) and has recently discovered that during the time of Noah’s flood a small group of extremely unusual DNA was introduced into the population. 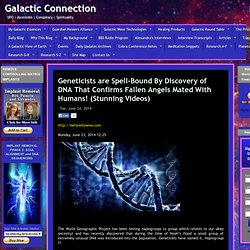 Geneticists have named it, Haplogroup I1. I believe this could be the DNA proof that fallen angels had sex with humans spoken of in the book of Genesis 6:4, “The Nephilim were on the earth in those days, and also afterward, when the sons of God came in to the daughters of men, and they bore children to them. Those were the mighty men who were of old, men of renown..” The haplogroup I1 gene has unique characteristics unlike any other gene, and geneticists are baffled by it.

But this gene anomaly isn’t the only DNA proof that exists! Video by Lyn Leahz…. 'Hobbit Humans' Actually Might Not Have Been Human. Ten years after being discovered, the “Hobbit Human” remains a controversial figure, with some researchers now thinking that this diminutive human-like being might not have been human after all. 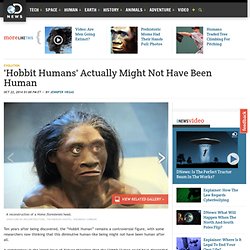 A commentary in the latest issue of Nature theorizes that the Hobbit Human could have descended from a more ancient pre-human group called Australopithecus, of which the 3.2-million-year-old skeleton “Lucy” is the most famous representative. Lucy might have to share the spotlight with the Hobbit, though, if the theory is proven to be correct. PHOTOS: Faces of Our Ancestors A quick refresher: The Hobbit Human, aka Homo floresiensis, was a 3 1/2 foot tall species with huge feet that lived on the remote Indonesian island as early as 13,000 years ago. Human Hybrid Found In china. Mysterious Gosford Glyphs: Remarkable Ancient Egyptian Hieroglyphs Discovered In Australia Could Re-Write History. MessageToEagle.com - Our journey takes us to Australia, a beautiful country full of ancient mysteries waiting to be unraveled. Mark Twain once said that Australian history is so curious and strange and it is also so full of lies. Certain ancient Australian relics, monuments and carvings tell a different story than we usually read in classical history books.

This time we take a look at some remarkable hieroglyphs that appear to be ancient Egyptian in origin. Steve Strong, an Australian-based researcher, author and former high-school teacher with a background in archaeology is convinced that these extraordinary hieroglyphs existed for some 4,500 years in Australia. The site includes an engraved Ankh, an essential accompaniment to Thoth, placed alongside an Ibis footprint (Thoth's recent animal counterpart) and the 'River of Life'. Historical Wonders of Sanxingdui_CIIC. Native American populations descend from three key migrations, scientists say. 'Hobbits of the Arctic' Traced by DNA.

Skeletal remains of 24,000-year-old boy raise new questions about first Americans. Results from a DNA study of a young boy's skeletal remains believed to be 24,000 years old could turn the archaeological world upside down -- it's been demonstrated that nearly 30 percent of modern Native American's ancestry came from this youngster's gene pool, suggesting First Americans came directly from Siberia, according to a research team that includes a Texas A&M University professor. Baffling 400,000-Year-Old Clue to Human Origins. Prehistoric Cave-art. Prehistoric Cave Art: Is fhis a teaching device ? Arkaim: Russia’s Ancient City & the Arctic Origin of Civilisation. Michael Tellinger - Civilization. Scholars have told us that the first civilisation on Earth emerged in a land called Sumer some 6000 years ago.

The persistent research by South Africans Michael Tellinger, Johan Heine and a team of leading scientists, over an extend seven-year period, has resulted in astonishing new archaeological and scientific discoveries. Despite Coelacanth Does the Evolutionary Dogma Re Man and Dinosaur Remain Unshaken?Or, Do Those Dogon Antique Dinosaurs of West Africa Prove Science is Myth-Staken « The s8intcom Blogger. Photo:Antique Dogon People’s Sculpture at the Metropolitan Museum of Art;Details and ID comparisons below.

Prehispanic Raised Field Agriculture. The Awesome Mistery of the Precolombian "Genetic Disc". Astonishing knowledge! +4 more posted on Oct, 30 2011 @ 04:52 PM. Alleged Cretaceous Hand Bones. (DRAFT) Glen J. Kuban, Nov. 2006 The bones in the photos above (showing two views of the same specimens) were reportedly found around 1999 by "Dr. Jamie Gutierrez" (Bogota, Columbia) in Cretaceous rock. They have since been advocated by strict creationists Carl Baugh and Kent Hovind as human hand bones. The following link provides a report on a lecture by Gutierrez sponsored by Baugh: However, more recently (Nov. 2006) Baugh expressed to Stephen Meyers that he was not sure of the identity of the bones, and indicated that he was leading the research effort to determine what they are. 1. 2. 3. 4. 5. 6.

Dr. (Email correspondence, Dr. I would like to add by way of my own observations that in regard to the proportions of individual carpals and phalanges, in human hand bones the carpal and most proximal phalange on digit II are approximately the same lengths as on digit III. I would like to thank Dr.