Potlatch. A potlatch[1][2] is a gift-giving feast practiced by indigenous peoples of the Pacific Northwest Coast of Canada and the United States, among whom it is traditionally the primary economic system.[3] This includes the Heiltsuk, Haida, Nuxalk, Tlingit, Makah, Tsimshian,[4] Nuu-chah-nulth,[5] Kwakwaka'wakw,[3] and Coast Salish cultures.[6] Potlatches are also a common feature of the peoples of the Interior and of the Subarctic adjoining the Northwest Coast, though mostly without the elaborate ritual and gift-giving economy of the coastal peoples (see Athabaskan potlatch). 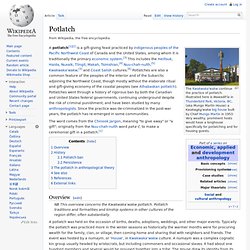 Potlatches went through a history of rigorous ban by both the Canadian and United States federal governments, continuing underground despite the risk of criminal punishment, and have been studied by many anthropologists. Since the practice was de-criminalized in the post-war years, the potlatch has re-emerged in some communities. Overview[edit] NB This overview concerns the Kwakwaka'wakw potlatch. History[edit]

Catallactics. Catallactics is the praxeological theory of the way the free market system reaches exchange ratios and prices. 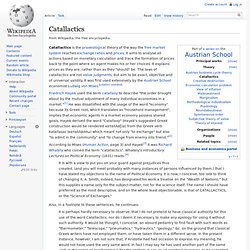 It aims to analyse all actions based on monetary calculation and trace the formation of prices back to the point where an agent makes his or her choices. It explains prices as they are, rather than as they "should" be. The laws of catallactics are not value judgments, but aim to be exact, objective and of universal validity. It was first used extensively by the Austrian School economist Ludwig von Mises. [citation needed] Friedrich Hayek used the term catallaxy to describe "the order brought about by the mutual adjustment of many individual economies in a market According to Mises (Human Action, page 3) and Hayek[3] it was Richard Whately who coined the term "catallactics". Also, in a footnote to these sentences, he continues: It has also been cited that Whately first coined the term in commentary during his Oxford lectures.[5] See also[edit] Price signal External links[edit] 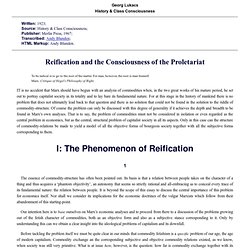 Reification and the Consciousness of the Proletariat To be radical is to go to the root of the matter. For man, however, the root is man himself.Marx: Critique of Hegel’s Philosophy of Right. IT is no accident that Marx should have begun with an analysis of commodities when, in the two great works of his mature period, he set out to portray capitalist society in its totality and to lay bare its fundamental nature.

The essence of commodity-structure has often been pointed out. Our intention here is to base ourselves on Marx’s economic analyses and to proceed from there to a discussion of the problems growing out of the fetish character of commodities, both as an objective form and also as a subjective stance corresponding to it. Reification (Marxism) Reification (German: Verdinglichung, literally: "making into a thing" (cf. 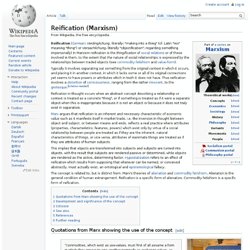 Latin "res" meaning "thing") or Versachlichung, literally "objectification"; regarding something impersonally) In Marxism reification is the thingification of social relations or of those involved in them, to the extent that the nature of social relationships is expressed by the relationships between traded objects (see commodity fetishism and value-form). Typically it involves separating out something from the original context in which it occurs, and placing it in another context, in which it lacks some or all of its original connections yet seems to have powers or attributes which in truth it does not have. Marxism. I. Karl Marx's background Marx in 1861. II. Some observations on Marx’s Capital, Vol. 1. I finished reading volume one of Marx’s Capital this past winter and have been meaning for a while to write up some brief notes and observations.

A ton of things have gotten in the way of doing that and since then I’ve probably lost a lot of the sharpness of my observations. Nevertheless, it’d help me to jot some of these thoughts down and I might as well share them (and, perhaps quixotically, encourage some out there to pick up Capital this summer). Capital has the unfortunate reputation of being a dry and boring economics text (please, pardon the blaspheme). A lot of “M. Smith buys cotton at 100 pounds sterling and sells it for” yadda-yadda. Marx’s wears the hat of a scientist or a philosopher in Capital, more than the hat of an accountant. Marx, and Marxists after him, believe that to understand society, one must have a radical analysis of social relations. This is what it means when Marx discusses his philosophy as being “scientific.” Like this: Like Loading... Reclaim Democracy! — Restoring Citizen Authority over Corporations.