Foundation for the Advancement of Mesoamerican Studies, Inc. Codices. Now, courtesy of Akademische Druck - u. 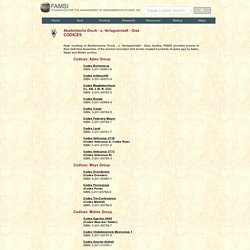 Mesoamerican Artifacts. Quelques peuples précolombiens. Teotihuacan; An Ancient City That Resembles A Circuit Board When Viewed From Above. A Maya Codex Found in a Cave Is Authentic, Researchers Say. Detail of eye on page 6 of the Grolier Codex (photo by Michael Coe, all courtesy Brown University) In the 1960s, looters searching a cave in Chiapas, Mexico, came across a rare, ancient codex rich with illustrations of weapon-wielding deities. 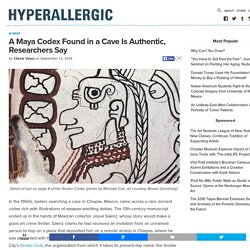 The 13th-century manuscript ended up in the hands of Mexican collector Josué Sáenz, whose story would make a good art crime thriller. Sáenz claims he had received an invitation from an unnamed person to hop on a plane that deposited him on a remote airstrip in Chiapas, where he was presented with the codex. It eventually went on display in 1971 at New York City’s Grolier Club, the organization from which it takes its present-day name: the Grolier Codex. Archaeologists have since been butting heads over its authenticity, largely due to its cryptic emergence and the number of forged Maya codices that have come to light. History, Travel, Arts, Science, People, Places. Mayans. Gods of Blood And Stone. For Scientific American (Click here for SciAm article) 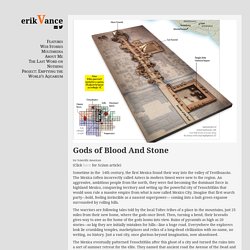 NEW ANCIENT MAYAN UFO ARTIFACTS 2012 JUST RELEASED NO ONE CAN DENY WE HAVE VISITORS COMING. Mayans. MayaWebPages. Unknown Civilization Found in Mexico. An unknown advanced civilization has been discovered in north-central Mexico that changes the accepted historical view of Mesoamerica. 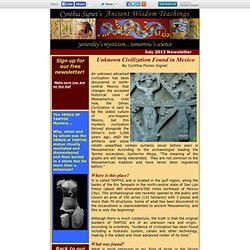 Until now, the Olmec Civilization is said to be the oldest culture of pre-hispanic Mexico, but this mystery civilization thrived alongside the Olmec's over 3,000 years ago, AND the artifacts and stone reliefs unearthed contain symbols never before seen in Mesoamerica! According to the archaeologist leading the Tamtoc excavation, Guillermo Ahuja, "The meaning of the glyphs are still being interpreted. They are not common to the Mesoamerican tradition and have never been registered before. " Where is this place? ANCIENT MYSTERIES EXPLAINED. <biados. <biados. Hidden Ancient Road Leading To Machu Picchu And An Underground Tunnel Discovered. MessageToEagle.com - Archaeologists just announced they have discovered a hidden ancient road leading straight to Machu Picchu, an Inca sacred place in the Andean mountains of Peru. 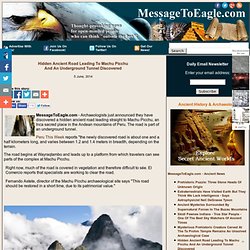 The road is part of an underground tunnel. Peru This Week reports "the newly discovered road is about one and a half kilometers long, and varies between 1.2 and 1.4 meters in breadth, depending on the terrain. The road begins at Wayraqtambo and leads up to a platform from which travelers can see parts of the complex at Machu Picchu. Magnificent Machu Picchu Astete added that the road “offers an impressive view of the llaqta inka [village area] at Machu Picchu, from a different angle than everyone usually sees it, and could help to decongest the tourist flow at Machu Picchu.” View from the newly discovered road. Who’d have thought that the Incas themselves would provide modern Peruvian tourism officials with a partial solution to Machu Picchu’s traffic problem? Entrance to the tunnel. Native American populations descend from three key migrations, scientists say. Scientists have found that Native American populations -- from Canada to the southern tip of Chile -- arose from at least three migrations, with the majority descended entirely from a single group of First American migrants that crossed over through Beringia, a land bridge between Asia and America that existed during the ice ages, more than 15,000 years ago. 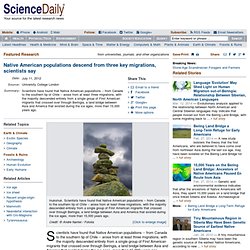 By studying variations in Native American DNA sequences, the international team found that while most of the Native American populations arose from the first migration, two subsequent migrations also made important genetic contributions. The paper is published in the journal Nature July 11. "For years it has been contentious whether the settlement of the Americas occurred by means of a single or multiple migrations from Siberia," said Professor Andres Ruiz-Linares (UCL Genetics, Evolution and Environment), who coordinated the study. "But our research settles this debate: Native Americans do not stem from a single migration. UNSOLVED MYSTERIES. Dinosaurs lived in Mesozoic. 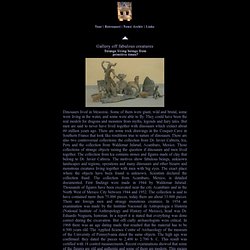 Some of them were giant, wild and brutal, some were living in the water, and some were able to fly. They could have been the real models for dragons and monsters from myths, legends and fairy tales. But men are said to never have lived together with dinosaurs which extinct about 60 million years ago. There are some rock drawings in the Cosquer Cave in Southern France that look like renditions true to nature of dinosaurs. There are also two controversial collections: the collection from Dr. Earth Measure.

The Message of the Engraved Stones of Ica By Javier Cabrera Darquea BOOK EXCERPT. UNSOLVED MYSTERIES.