Sign the petition to Congress: Protect workers from Amazon’s dangerous surveillance practices (petition) Don’t Let Congress Run Out the Clock on 13.5 Million Workers. This summer, the Department of Labor (DOL) is expected to implement a new overtime rule, which would raise the overtime salary threshold from $23,660 to $50,440, strengthening the right of 13.5 million additional workers to receive overtime pay and the right to earn a fair living. 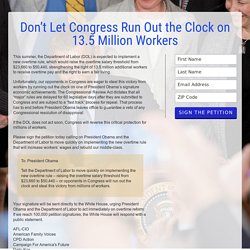 Unfortunately, our opponents in Congress are eager to steal this victory from workers by running out the clock on one of President Obama’s signature economic achievements. The Congressional Review Act dictates that all “major” rules are delayed for 60 legislative days after they are submitted to Congress and are subject to a “fast track” process for repeal. That process has to end before President Obama leaves office to guarantee a veto of any Congressional resolution of disapproval. If the DOL does not act soon, Congress will reverse this critical protection for millions of workers. To: President Obama. Working families need help. Raise the minimum wage! The minimum wage is too low to make ends meet. 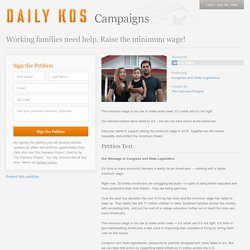 Working Families. Thank you UPS drivers! Working Families. Would You Be Willing to Pay More to Dine Out if it Meant Healthcare for Workers? A Los Angeles restaurant is facing heavy criticism from diners over a new policy that has added a 3 percent tax to the ticket when dining out. 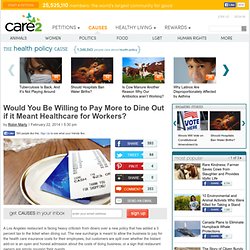 The new surcharge is meant to allow the business to pay for the health care insurance costs for their employees, but customers are split over whether the blatant add-on is an open and honest admission about the costs of doing business, or a sign that restaurant owners are simply gouging their guests. According to the LA Times, Republique restaurant is embarking on a new, transparent means of passing on health care costs to consumers, with a 3 percent “Healthy LA” surcharge per diner.

The charge, according to the restaurant owners, will go directly to paying for new employee health insurance plans, a must have under the new Affordable Care Act for any business that employs more than 50 full time employees. Meet the senator from ExxonMobil who’s taking over the Energy Committee. Mary Landrieu does not much care for the environment. 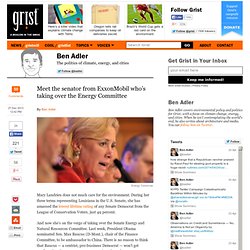 During her three terms representing Louisiana in the U.S. Senate, she has amassed the lowest lifetime rating of any Senate Democrat from the League of Conservation Voters, just 49 percent. And now she’s on the verge of taking over the Senate Energy and Natural Resources Committee. Last week, President Obama nominated Sen. Today in NYC: Revolt Against the Injustice of Low-Wage Capitalism. OriginalDirtyBirds4Justice ODBJ. / pétition hausse salaires de Walmart. Over 110 Arrested as Record Black Friday Protests Challenge Wal-Mart, Major Retailers on Low Wages. This is a rush transcript. 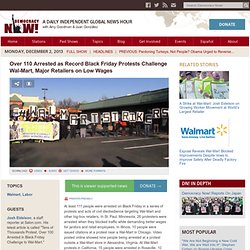 Copy may not be in its final form. AMY GOODMAN: At least 111 people were arrested Black Friday in a series of protests and acts of civil disobedience targeting Wal-Mart and other big-box retailers. In St. Paul, Minnesota, 26 protesters were arrested when they blocked traffic while demanding better wages for janitors and retail employees; in Illinois, 10 people issued citations at a protest near a Wal-Mart in Chicago. Video posted online showed nine people being arrested at a protest outside a Wal-Mart store in Alexandria, Virginia. 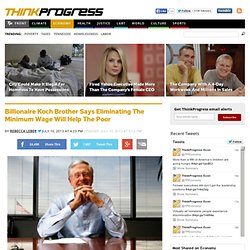 Warehouse Workers Move To Name Walmart In Wage-Theft Lawsuit. LOS ANGELES -- Warehouse workers in Southern California have filed a petition in court to name Walmart as a defendant in a federal wage-theft lawsuit, marking a significant turn in low-wage supply chain workers' fight with the world's largest retailer. 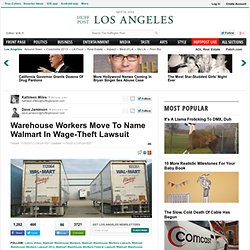 Surprise? Apple Underpays American Workers. Though Apple seems to have dodged the controversy surrounding the working conditions at its subcontractors’ facilities in China, recent allegations have surfaced that hit far closer to home. 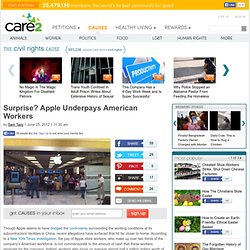 According to a New York Times investigation, the pay of Apple store workers, who make up over two thirds of the company’s American workforce, is not commensurate to the amount of cash that these workers generate for the company. Indeed, workers who move on average almost half a million dollars worth of product annually have a starting salary of just $25,000 with little opportunity for growth. Apple, exploiting a perpetually weak labor market for young workers and their naivete, is able to squeeze these workers in several different ways, including: These revelations further show the importance of encouraging ethical consumption and production. Video - Foxconn : l'enquête qui jette de l'huile sur Apple - Maxisciences. Malgré le fait d'avoir été plusieurs fois pointées du doigt l'année dernière, les conditions de travail chez Foxconn, le principal assembleur d'Apple, ne semblent s'être améliorées. 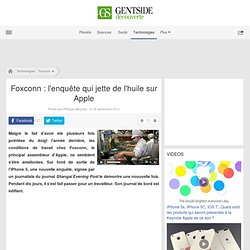 Using a combination of surveys, onsite visits, undercover investigations, and face-to-face interviews, China Labor Watch evaluated 10 factories on Apple's supply chain. (The investigation was not limited to factories run by Foxconn, Apple's largest supplier, which came under media scrutiny after a series of worker suicides but whose factories, as the Fair Labor Association previously noted, "are way, way above average. ") Oil companies offer helpful tips on how their employees should vote. From the Wall Street Journal: The U.S. oil industry is for the first time making a direct political pitch to its employees and others, borrowing from traditional union tactics in a bid to secure a friendlier environment in Washington. 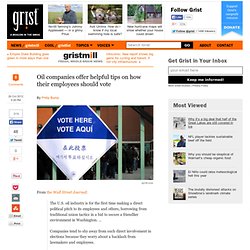 …Companies tend to shy away from such direct involvement in elections because they worry about a backlash from lawmakers and employees.The industry’s campaign is focused on the roughly nine million Americans whose jobs are tied to the oil and natural-gas industry, from drillers to truck drivers to low-skilled workers who help build pipelines. The goal is to persuade a majority of Americans to support expanded oil drilling, hydraulic fracturing and pipeline construction, including the Keystone XL Pipeline. “We realized that we are sitting on a vast resource of employees who can register their views,” said Jack Gerard, the president of the American Petroleum Institute, the industry’s Washington trade association and organizer of the effort. Bain Capital and the Race to the Bottom in Manufacturing and Wages. On the campaign trail, Mitt Romney wants to have his cake and eat it too. "Governments do not create jobs," a stern Romney told CNN's Candy Crowley twice during the second debate.