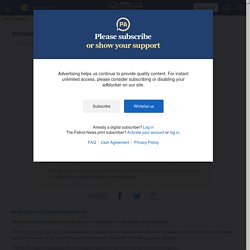 The Pennsylvania Sea Grant has launched an app for the in-the-field identification of aquatic invasive species, which pose a significant threat to the state’s economy, freshwater resources and native aquatic species. The PA AIS app is now available in the Apple App Store, with an Android version anticipated. It can be used in airplane mode or in areas outside of coverage, making it ideal for use in the field. Users can identify AIS and submit a report to the state AIS coordinator, including the location, severity, and photos of the suspected infestation. Illustrations help users learn more about each species to ensure accurate identification in the field. Prevention tips help educate freshwater enthusiasts such as anglers and boaters about the steps they can take to properly clean gear and ensure that AIS are not transported from one water body to another. Thanks for visiting PennLive. 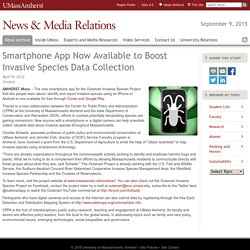 Thanks to a new collaboration between the Center for Public Policy and Administration (CPPA) at the University of Massachusetts Amherst and the state Department of Conservation and Recreation (DCR), efforts to combat potentially devastating species are gaining momentum. Now anyone with a smartphone or a digital camera can help scientists collect valuable data about invasive species throughout Massachusetts. Charles Schweik, associate professor of public policy and environmental conservation at UMass Amherst, and Jennifer Fish, director of DCR’s Service Forestry program in Amherst, have received a grant from the U.S. NATIONAL PARK SERVICE 29/11/11 "IveGot1" – Mobile App now Available! Ive Got 1 Mobile App National Park Service News Release Date: November 29, 2011 Contact:Park Information, 305-242-7700 Contact:Media Contact - Linda Friar, 305-242-7714 Contact:Univ of Georgia - Chuck Bargeron, 229-386-3298 Homestead/Miami, Florida: Everglades National Park (Park) is pleased to announce the release of a much expanded mobile app for tracking invasive exotics in Florida.The Park partnered with University of Georgia in the development of the "IveGot1" app for the popular iPhone to identify and report invasive plants and animals spotted in Florida. 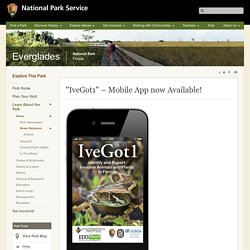 IveGot1 - Identify and Report Invasive Animals and Plants in Florida. IveGot1 brings the power of EDDMapS to your iPhone. 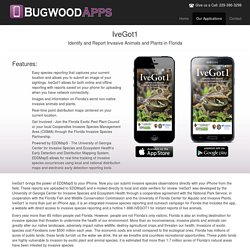 Now you can submit invasive species observations directly with your iPhone from the field. These reports are uploaded to EDDMapS and e-mailed directly to local and state verifiers for review. UNIVERSITY OF SOUTHERN CALIFORNIA - AVRIL 2014 - MAPPING NATIVE PLANTS: A MOBILE GIS APPLICATION FOR SHARING INDIGENOUS KNOWLEDGE IN SOUTHERN CALIFORNIA. ALASKA PUBLIC 27/08/15 Smartphone app identifies weeds invasive to Alaska. Common toadflax is native to Europe, but is an invasive species in Alaska. 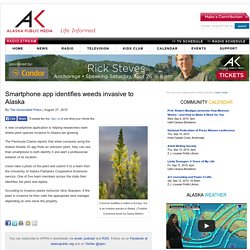 (Creative Commons photo by Oxana Maher) A new smartphone application is helping researchers learn where plant species invasive to Alaska are growing. The Peninsula Clarion reports that when someone using the Alaska Weeds ID app finds an unknown plant, they can use their smartphone to both identify it and alert a professional botanist of its location. Users take a photo of the plant and submit it to a team from the University of Alaska Fairbanks Cooperative Extension service. One of five team members across the state then identifies the plant and replies. According to invasive plants instructor Gino Graziano, if the plant is invasive he then calls the appropriate land manager depending on who owns the property. MOBILE THINKERS - DEC 2010 - Smartphone App Tracks Invasive Species. Eric Graham, Associate Development Engineer - CENS, What's Invasive Community Data Collection A day in the park doesn’t necessarily mean that nature lovers are off the grid. 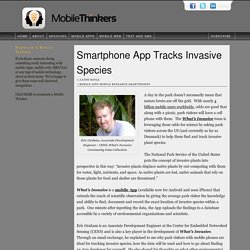 With nearly 4 billion mobile users worldwide, odds are good that along with a picnic, park visitors will have a cell phone with them. The What’s Invasive team is leveraging those odds for science by asking park visitors across the US (and currently as far as Denmark) to help them find and track invasive plant species. The National Park Service of the United States puts the concept of invasive plants into perspective in this way: “invasive plants displace native plants by out-competing with them for water, light, nutrients, and space.

As native plants are lost, native animals that rely on those plants for food and shelter are threatened.” Eric Graham is an Associate Development Engineer at the Center for Embedded Networked Sensing (CENS) and is also a key player in the development of What’s Invasive. USDA 30/06/14 APPlying New Strategies to Nip Invasive Species in the Bud in New Jersey. NRCS Partner Employee Elizabeth Ciuzio Freiday, certified wildlife biologist, in a field of the vine kudzu, which is highly threatening to native communities. 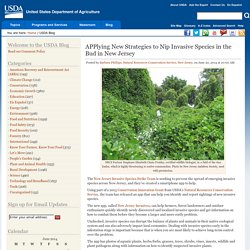 Photo by New Jersey Audubon Society, used with permission. The New Jersey Invasive Species Strike Team is working to prevent the spread of emerging invasive species across New Jersey, and they’ve created a smartphone app to help. Using part of a 2013 Conservation Innovation Grant from USDA’s Natural Resources Conservation Service, the team has released an app that can help you identify and report sightings of new invasive species. The new app, called New Jersey Invasives, can help farmers, forest landowners and outdoor enthusiasts quickly identify newly discovered and localized invasive species and get information on how to combat them before they become a larger and more costly problem. The lists can be sorted by either scientific or common names, which is beneficial to those unfamiliar with the Latin names. USDA - Smartphone Applications.