NUTRIENTS 30/07/19 Assessing Changes in Sodium Content of Selected Popular Commercially Processed and Restaurant Foods: Results from the USDA: CDC Sentinel Foods Surveillance Program. NUTRIENTS - 2013 - Sodium Intakes of US Children and Adults from Foods and Beverages by Location of Origin and by Specific Food Source. American Journal of Preventive Medicine Volume 53, Issue 6, Supplement 2, December 2017, Nutrition Label Use and Sodium Intake in the U.S. 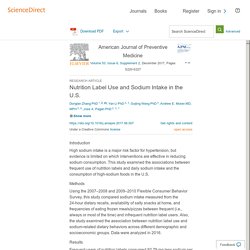 Please enable JavaScript to use all the features on this page. CDC 23/01/14 Reducing sodium in restaurant food is an opportunity for choice. Press Release For Immediate Release: Thursday, January 23, 2014Contact: Media Relations (404) 639-3286 Americans eat out at fast food or dine-in restaurants four or five times a week. 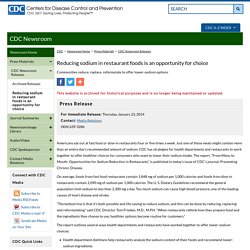 Just one of those meals might contain more than an entire day’s recommended amount of sodium. CDC has strategies for health departments and restaurants to work together to offer healthier choices for consumers who want to lower their sodium intake. The report, “From Menu to Mouth: Opportunities for Sodium Reduction in Restaurants,” is published in today’s issue of CDC’s journal, Preventing Chronic Disease. On average, foods from fast food restaurants contain 1,848 mg of sodium per 1,000 calories and foods from dine-in restaurants contain 2,090 mg of sodium per 1,000 calories. Californian Journal of Health Promotion 2016, Volume 14, Consumer Knowledge, Attitudes, and Behaviors of Sodium Intake and Reduction Strategies in Los Angeles County: Results of an Internet Panel Survey (2014-2015) FDA - JUNE 2016 - Draft guidance : Voluntary Sodium Reduction Goals: Target Mean and Upper Bound Concentrations for Sodium in Commercially Processed, Packaged, and Prepared Foods : Guidance for Industry.

FDA 02/06/16 Sodium in Your Diet: Use the Nutrition Facts Label and Reduce Your Intake. Print & Share (PDF) 494KB En español (Spanish) You’ve probably heard that most Americans eat too much sodium, and too much sodium can raise blood pressure – which can have serious health consequences if not treated. 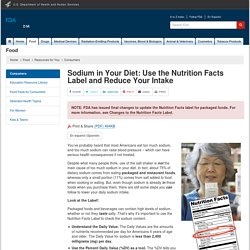 Despite what many people think, use of the salt shaker is not the main cause of too much sodium in your diet. In fact, about 75% of dietary sodium comes from eating packaged and restaurant foods, whereas only a small portion (11%) comes from salt added to food when cooking or eating. But, even though sodium is already in these foods when you purchase them, there are still some steps you can follow to lower your daily sodium intake. Look at the Label! VEILLE ACTION 02/06/16 Réduction du sel dans les aliments : de nouvelles directives aux États-Unis. La Food and Drug Administration (FDA) vient d’émettre des directives préliminaires qui fixent des cibles de réduction des taux de sodium à l’intention de l’industrie alimentaire. 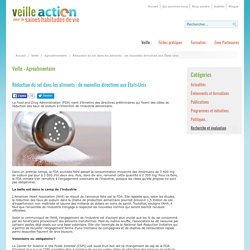 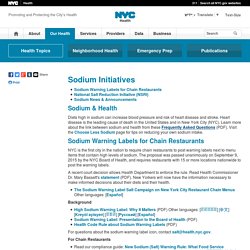 Heart disease is the leading cause of death in the United States and in New York City (NYC). CSPI 27/01/12 Comments and research related to recent sodium reduction. CSPI 02/07/14 Chain Restaurants Decrease Sodium Slightly but Progress is Slow & Uneven, Report Finds. A review of 136 meals from 17 top restaurant chains finds that the companies have reduced sodium on average by six percent between 2009 and 2013, or just 1.5 percent per year. 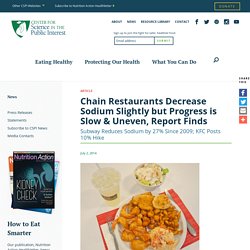 The nonprofit Center for Science in the Public Interest says that the progress has been slow and inconsistent. The biggest reductions in sodium were posted by Subway, Burger King, and McDonald's, but KFC and Jack in the Box actually increased sodium by 12.4 percent and 7.2 percent, respectively, in the sample of meals reviewed. Despite the progress, 79 percent of the 81 adult meals in the study still contained more than 1,500 milligrams (mg) of sodium.

A majority of Americans, including people 51 and older, people with high blood pressure, and African-Americans, should try to limit themselves to 1,500 mg of sodium per day, according to the Centers for Disease Control and Prevention. At KFC, CSPI evaluated nutrition data provided by the company for three adult meals and four kids' meals. CSPI 19/06/13 More Effort Needed to Reduce Sodium in Processed Foods, Says CSPI. Many food manufacturers have reduced the sodium content of their products since 2005, but some have added more salt than ever according to areport published by the Center for Science in the Public Interest (CSPI). 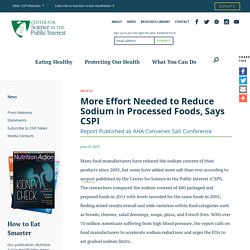 The researchers compared the sodium content of 480 packaged and prepared foods in 2011 with levels recorded for the same foods in 2005, finding mixed results overall and wide variation within food categories such as breads, cheeses, salad dressings, soups, pizza, and French fries. With over 70 million Americans suffering from high blood pressure, the report calls on food manufacturers to accelerate sodium reductions and urges the FDA to set gradual sodium limits.

CSPI 13/05/13 Food Industry's Sodium Reduction Efforts Have Failed. Food manufacturers did not make much progress between 2005 and 2011 in reducing sodium levels in packaged and restaurant foods, according to a new investigation published online today in the journal JAMA Internal Medicine. 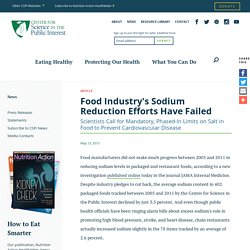 Despite industry pledges to cut back, the average sodium content in 402 packaged foods tracked between 2005 and 2011 by the Center for Science in the Public Interest declined by just 3.5 percent. And even though public health officials have been ringing alarm bills about excess sodium's role in promoting high blood pressure, stroke, and heart disease, chain restaurants actually increased sodium slightly in the 78 items tracked by an average of 2.6 percent. NYC HEALTH 23/08/16 Health Department Announces 5 Year Results of National Salt Reduction Initiative. Health Department Announces 5 Year Results of National Salt Reduction Initiative Food Companies Achieve Modest Sodium Reduction; Opportunity for More Progress through FDA ActionAugust 23, 2016 – The New York City Health Department today announced that sodium levels decreased in a sample of top selling packaged foods by about 7% from 2009 to the beginning of 2015. 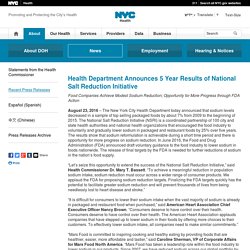 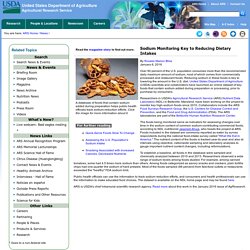 NYC GLOBAL PARTNERS 15/01/14 Best Practice: National Salt Reduction Initiative. HARVARD HEALTH 16/05/13 Sodium still high in fast food and processed foods H. Fast-food restaurants deliver filling, inexpensive meals and snacks. But there’s usually a hidden added cost: a wallop of salt (sodium) that isn’t good for cardiovascular health. Even with the current clamor for reducing sodium in the American diet, and industry promising to do just that, the amount of sodium in prepared foods hasn’t changed much since 2005, according to a report published in the latest issue of JAMA Internal Medicine.

American Journal of Preventive Medicine Volume 46, Issue 5, May 2014, Consumer Sentiment on Actions Reducing Sodium in Processed and Restaurant Foods, ConsumerStyles 2010. To view the full text, please login as a subscribed user or purchase a subscription. Click here to view the full text on ScienceDirect. UCSF 11/02/13 Reducing Sodium in American Diet Would Save Hundreds of Thousands of Lives. Hundreds of thousands of lives could be saved over 10 years if Americans reduced their sodium consumption to the levels recommended in federal guidelines, according to a new study by researchers at UC San Francisco (UCSF), Harvard Medical School and Simon Fraser University in Canada.

Described this week in the journal Hypertension, the study emerged from a workshop convened last year by the U.S. Centers for Disease Control and Prevention (CDC), which sought to quantify the health benefits of population-wide sodium reduction. Pam Coxson, PhD The CDC brought together groups of scientists from the three universities, who each used completely different computer models to estimate how lowering sodium would save lives – largely by reducing the number of heart attacks and strokes.

To estimate the proportion of the U.S. population for whom the 1,500 mg recommendation applies and to assess the usual sodium intake for those persons, CDC and the National Institutes of Health used data for 2005--2008 from the National Health and Nutrition Examination Survey (NHANES). NHANES is a nationally representative, multistage survey of the U.S. non-institutionalized population.* During NHANES 2005--2008, a total of 18,823 participants aged ≥2 years were interviewed and examined. NEW YORK CITY GLOBAL PARTNERS 14/07/11 Best Practice: National Salt Reduction Initiative. Kansas State University - 2012 - Thèse en ligne : EFFECT OF SALT REDUCTION ON GROWTH OF LISTERIA MONOCYTOGENES IN BROTH AND MEAT.

More Effort Needed to Reduce Sodium in Processed Foods, Says CSPI. Report Published as AHA Convenes Salt Conference June 19, 2013 Many food manufacturers have reduced the sodium content of their products since 2005, but some have added more salt than ever according to a report published by the Center for Science in the Public Interest (CSPI). The researchers compared the sodium content of 480 packaged and prepared foods in 2011 with levels recorded for the same foods in 2005, finding mixed results overall and wide variation within food categories such as breads, cheeses, salad dressings, soups, pizza, and French fries. With over 70 million Americans suffering from high blood pressure, the report calls on food manufacturers to accelerate sodium reductions and urges the FDA to set gradual sodium limits.