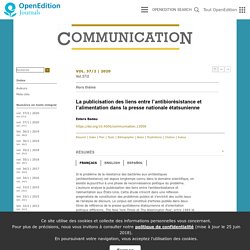 Tableau 1. FRONT. VET. SCI. 29/11/19 Strategic Priorities for Research on Antibiotic Alternatives in Animal Agriculture—Results From an Expert Workshop (Etats-Unis) Introduction Traditional antimicrobial drugs, or antibiotics, are critical tools to promote human and animal health, yet their efficacy is increasingly threatened by antibiotic resistance. 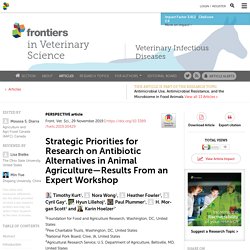 Any exposure to antibiotics can select for resistant bacteria; therefore, their use in all settings must be carefully managed (1). In response to this global public health challenge and growing consumer concerns about food production practices, increasing numbers of food companies are voluntarily limiting the use of antibiotics in their supply chains (2). For the purpose of this study, and consistent with other established definitions [see for instance (3, 4)], alternatives to antibiotics were broadly defined as any substance that can prevent the need for or be substituted for antimicrobial drugs. CDC EID - JULY 2019 - Racial/Ethnic Disparities in Antimicrobial Drug Use, United States, 2014–2015. Disclaimer: Ahead of print articles are not considered as final versions. 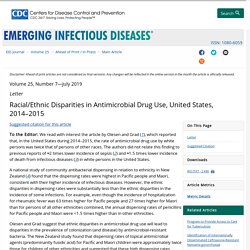 Any changes will be reflected in the online version in the month the article is officially released. To the Editor: We read with interest the article by Olesen and Grad (1), which reported that, in the United States during 2014–2015, the rate of antimicrobial drug use by white persons was twice that of persons of other races. The authors did not relate this finding to previous reports of ≈2 times lower incidence of sepsis (2) and ≈1.5 times lower incidence of death from infectious diseases (3) in white persons in the United States. MBIO 17/04/18 New York City House Mice (Mus musculus) as Potential Reservoirs for Pathogenic Bacteria and Antimicrobial Resistance Determinants. 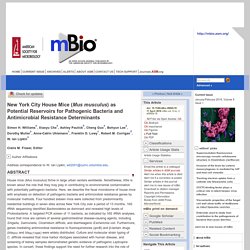 Nonetheless, little is known about the role that they may play in contributing to environmental contamination with potentially pathogenic bacteria. Here, we describe the fecal microbiome of house mice with emphasis on detection of pathogenic bacteria and antimicrobial resistance genes by molecular methods. Four hundred sixteen mice were collected from predominantly residential buildings in seven sites across New York City over a period of 13 months. 16S rRNA sequencing identified Bacteroidetes as dominant and revealed high levels of Proteobacteria. A targeted PCR screen of 11 bacteria, as indicated by 16S rRNA analyses, found that mice are carriers of several gastrointestinal disease-causing agents, including Shigella, Salmonella, Clostridium difficile, and diarrheagenic Escherichia coli.

IMPORTANCE Mice are commensal pests often found in close proximity to humans, especially in urban centers. PCR detection of AMR genes. SCIENCE DAILY 17/04/18 Of mice and disease: Antibiotic-resistant bacteria discovered in NYC house mice A study of mice collected from apartment buildings reveals they carry several disease-causing pathogens, some of which may be resistant to treatments. A study by scientists at the Center for Infection and Immunity (CII) at Columbia University's Mailman School of Public Health finds New York City house mice carry bacteria responsible for mild to life-threatening gastroenteritis in people, and some of these bacteria may be resistant to antibiotics. 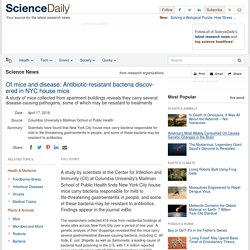 Findings appear in the journal mBio. The researchers collected 416 mice from residential buildings at seven sites across New York City over a period of one year. A genetic analysis of their droppings revealed that the mice carry several gastrointestinal disease-causing bacteria, including C. difficile, E. coli, Shigella, as well as Salmonella, a leading cause of bacterial food poisoning in the U.S. with 1.4 million reported cases annually along with 15,000 hospitalizations and 400 deaths.

They also found evidence of genes mediating antimicrobial resistance to several common antibiotics. MMWR Morb Mortal Wkly Rep. 2018 Apr 6;67(13): Vital Signs: Containment of Novel Multidrug-Resistant Organisms and Resistance Mechanisms - United States, 2006-2017. Although the proportion of Klebsiella spp. and E. coli that had either an ESBL or CRE phenotype both declined during 2006–2015, larger decreases and a lower overall percent resistant were observed for the CRE phenotype. 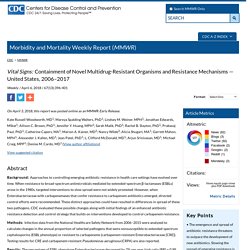 This difference might be attributable, at least in part, to the more directed response employed to slow the spread of CRE once it was identified. Although CDC’s containment approach had not yet been fully initiated when the decline in CRE began, these data suggest that an early aggressive response, as outlined in CRE-specific infection prevention recommendations released beginning in 2009 (6), can slow emergence and even decrease the occurrence of infections from resistant pathogens. As laboratory capacity improved, ARLN testing volume and public health responses increased over the first three quarters of 2017, demonstrating that recent investments in detection and response capacity are facilitating prompt identification of and response to emerging resistant organisms. 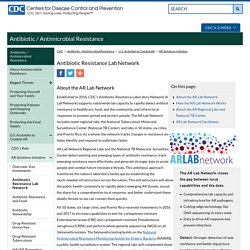 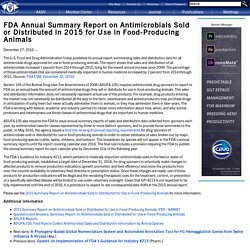 Food and Drug Administration today published its annual report summarizing sales and distribution data for all antimicrobial drugs approved for use in food-producing animals. The report shows that sales and distribution of all antimicrobials increased 1 percent from 2014 through 2015, tying for the lowest annual increase since 2009. The percentage of those antimicrobials that are considered medically important in human medicine increased by 2 percent from 2014 through 2015. FDA 01/10/15 Présentation : Medically important antimicrobials in animal agriculture. 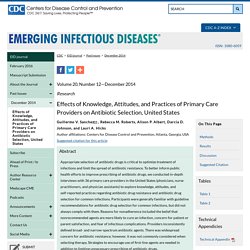 ​The National Institute of Allergy and Infectious Diseases (NIAID), part of the National Institutes of Health, recently announced a research funding opportunity to develop and/or produce diagnostics to quickly detect the key bacteria responsible for antibacterial-resistant infections in hospital settings. 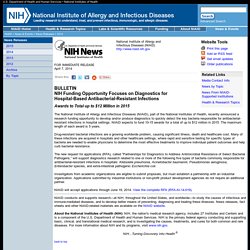 NIAID expects to fund 10-15 awards for a total of up to $12 million in 2015. The maximum length of each award is 5 years. Drug-resistant bacterial infections are a growing worldwide problem, causing significant illness, death and healthcare cost. Many of these infections are acquired in hospitals and other healthcare settings, where rapid and sensitive testing for specific types of bacteria are needed to enable physicians to determine the most effective treatments to improve individual patient outcomes and help curb bacterial resistance.

The agency's first all-encompassing report on antibiotic disease threats spans 114 pages and ranks the pathogens in part to spur a multipronged effort to prioritize and battle the problems. Antibiotic-resistant microorganisms play a role in 23,000 deaths each year, the CDC said. At a media briefing today, CDC Director Tom Frieden, MD, MPH, said the landmark report provides a snapshot of the antibiotic-resistant organisms that have the biggest impact on human health. He said the numbers are very conservative estimates that don't take into account infections that occur outside hospitals, such as nursing homes and dialysis centers. "The bottom line is stewardship," Frieden said. SCIENCES ET AVENIR 18/09/13 Les résistances aux antibiotiques tuent 23.000 américains par an. GAO - JUIN 2011 - ANTIBIOTIC RESISTANCE - Data Gaps Will Remain Despite HHS Taking Steps to Improve Monitoring. SOCIETY FOR HEALTHCARE EPIDEMIOLOGY OF AMERICA - Multi-Resistant Gram-Negative Bacteria. 2006 - Management of Multidrug-Resistant Organisms In Healthcare Settings, 2006 Jane D.