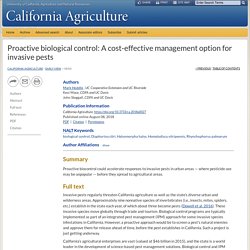 Approximately nine nonnative species of invertebrates (i.e., insects, mites, spiders, etc.) establish in the state each year, of which about three become pests (Dowell et al. 2016). These invasive species move globally through trade and tourism. Biological control programs are typically implemented as part of an integrated pest management (IPM) approach for some invasive species infestations in California. However, a proactive approach would be to screen a pest’s natural enemies and approve them for release ahead of time, before the pest establishes in California.

Such a project is just getting underway. California’s agricultural enterprises are vast (valued at $46 billion in 2015), and the state is a world leader in the development of science-based pest management solutions. If biocontrol agents had been approved prior to ACP establishment What can California do? INVASIVESPECIES_WA_GOV - JANV 2017 - Economic impact of invasive species to Washington state. Colorado State University - 2010 - Thèse en ligne : A COST-BENEFIT ANALYSIS OF PREVENTATIVE MANAGEMENT FOR ZEBRA AND QUAGGA MUSSELS IN THE COLORADO-BIG THOMPSON SYSTEM.

PLOS 09/09/11 Economic Impacts of Non-Native Forest Insects in the Continental United States. Abstract Reliable estimates of the impacts and costs of biological invasions are critical to developing credible management, trade and regulatory policies. 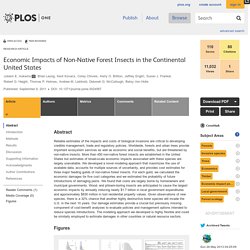 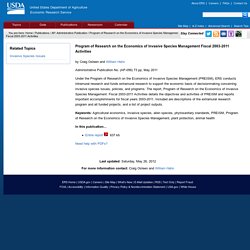 University of California 15/09/06 AGGREGATE COSTS AND BENEFITS OF GOVERNMENT INVASIVE SPECIES CONTROL ACTIVITIES IN CALIFORNIA. UNIVERSITY OF FLORIDA - 2004 - Dissertation en ligne : THE ECONOMIC IMPACTS TO AN INDUSTRY ASSOCIATED WITH AN INVASIVE SPECIES: THE CASE OF CITRUS CANKER IN FLORIDA. University of Notre Dame (Indiana) - 2006 - Dissertation en ligne : ECOLOGICAL AND BIOECONOMIC RISK ASSESSMENT FOR INVASIVE SPECIES. Human transport of live organisms presents a policy challenge for globalization:activities that move organisms benefit society, but some nonindigenous species become invasive and cause harm. 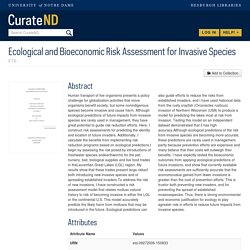 Although ecological predictions of future impacts from invasive species are rarely used in management, they have great potential to guide risk reduction efforts. Here, I construct risk assessments for predicting the identity and location of future invaders. Additionally, I calculate the benefits from implementing risk reduction programs based on ecological predictions.I begin by assessing the risk posed by introductions of freshwater species andearthworms for the pet, nursery, bait, biological supplies and live food trades in theLaurentian Great Lakes (LGL) region.

US FOREST SERVICE 20/10/10 The cost of the emerald ash borer infestation. Research Issue As emerald ash borer spreads and kills ash trees across the U.S., how much can we expect to spend on treating healthy trees or removing and replacing infested trees? 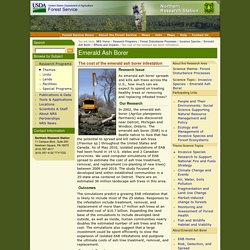 Our Research In 2002, the emerald ash borer (Agrilus planipennis Fairmaire) was discovered near Detroit, Michigan and Windsor, Ontario. The emerald ash borer (EAB) is a beetle native to Asia that has the potential to spread and kill native ash trees (Fraxinus sp.) throughout the United States and Canada. As of May 2010, isolated populations of EAB had been found in 14 U.S. states and 2 Canadian provinces. 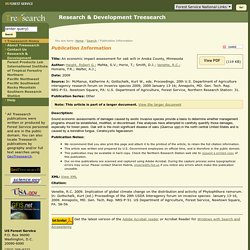 Publication Series: Other. Nevada Fishing Seasons & Regulations - 2009 - Invasive Species, Costly to Control. Rugosa rose, HIV, the rat and Iberian slug – over the years many alien species have been introduced in Sweden, deliberately or inadvertently. 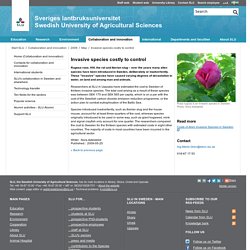 These “invasive” species have caused varying degrees of devastation in water, on land and among man and animals. Researchers at SLU in Uppsala have estimated the cost to Sweden of thirteen invasive species. The total cost arising as a result of these species was between SEK 175 and SEK 565 per capita, which is on a par with the cost of the Swedish carbon dioxide emission reduction programme, or the action plan to combat eutrophication of the Baltic Sea. Species introduced inadvertently, such as Iberian slug and the house mouse, account for at least three-quarters of the cost, whereas species originally introduced to be used in some way, such as giant hogweed, mink and signal crayfish only account for one quarter.

The researchers compared the cost to Sweden for the thirteen species with estimated costs in eight other countries. UNIVERSITY OF MINNESOTA - Présentation : Evaluating market and non-market costs of invasive fish. UNIVERSITY OF CALIFORNIA - Présentation : ECONOMIC IMPACTS OF INVASIVE SPECIES IN CA AGRICULTURE. UNIVERSITY OF FLORIDA - 2007 - Dissertation : THE ECONOMICS AND LAW OF INVASIVE SPECIES MANAGEMENT IN FLORIDA. NATIONAL CENTER FOR ENVIRONMENTAL ECONOMICS - 2005 - The Economic Impacts of Aquatic Invasive Species: A Review of the Literature. 6, 2010) COS 80-1: Cost-sensitive risk assessment for invasive plants species in the United States. ERS USDA - JULY 2008 - Prioritizing Invasive Species Management by Optimizing Production of Ecosystem Service Benefits. 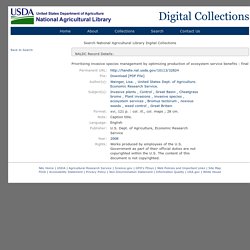 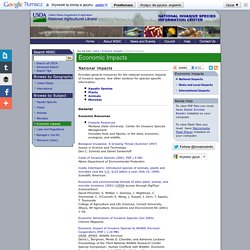