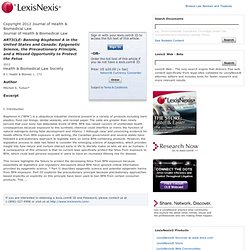 Turker* I. Introduction Bisphenol A ("BPA") is a ubiquitous industrial chemical present in a variety of products including hard plastics, food can linings, dental sealants, and receipt paper. The odds are greater than ninety percent that your body has detectable levels of BPA. BPA has raised concern of unintended health consequences because exposure to this synthetic chemical could interfere or mimic the function of natural estrogens during fetal development and infancy. 1 Although clear and convincing evidence for health effects from BPA exposure is still lacking, the Canadian government and several states have followed a precautionary approach to legislate bans on some BPA-containing products. CONGRESSMAN ED MARKEY 04/06/13 Markey Legislation Would Get BPA Out of Cans, Containers, Children. Contact: Eben Burnham-Snyder, Rep. 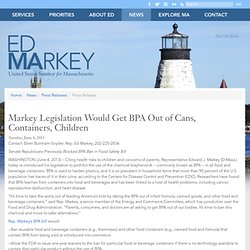 Ed Markey, 202-225-2836 Senate Republicans Previously Blocked BPA Ban in Food Safety Bill WASHINGTON (June 4, 2013) – Citing health risks to children and concerns of parents, Representative Edward J. Markey (D-Mass.) today re-introduced his legislation to prohibit the use of the chemical bisphenol-A -- commonly known as BPA -- in all food and beverage containers. BPA is used to harden plastics, and it is so prevalent in household items that more than 90 percent of the U.S. population has traces of it in their urine, according to the Centers for Disease Control and Prevention (CDC).

“It’s time to take the worry out of feeding America’s kids by taking the BPA out of infant formula, canned goods, and other food and beverage containers,” said Rep. Rep. --Ban reusable food and beverage containers (e.g., thermoses) and other food containers (e.g., canned food and formula) that contain BPA from being sold or introduced into commerce. Since 2008, Rep. University of Houston - FEV 2010 - FDAâ€™s Latest Position on Bisphenol A.

FORBES 27/03/13 Leading Environmental Group Scientist Praises FDA's Ground-Breaking Research On BPA: A Tipping Point In The Cont. CNN 30/03/13 FDA says it will deny request to ban BPA. The FDA was asked in a 2008 petition to regulate the use of BPA in human food and food packaging. The FDA says the decision does not represent a final safety determinationThe National Resources Defense Council pressed the agency to respond to its request for a banThe agency says there are serious questions about studies showing BPA's effectsBisphenol A is a chemical used in bottles, cans and other containers White Oak, Maryland (CNN) -- The Food and Drug Administration announced Friday it will deny the National Resources Defense Council's petition asking it to prohibit the use of bisphenol A, commonly known as BPA, in products manufactured in the United States.

However, the federal agency stressed the announcement is not a final safety determination and it continues to support research examining the safety of BPA. NEWS MEDICAL 31/07/12 FDA partial ban of bisphenol A raises questions. By Helen Albert, Senior MedWire Reporter The US Food and Drug Administration (FDA) has banned the use of polycarbonate resins, including bisphenol A (BPA), in the manufacture of infant feeding bottles and spill-proof or "sippy" cups. 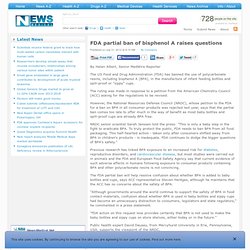 The ruling was made in response to a petition from the American Chemistry Council (ACC) asking for the regulations to be revised. However, the National Resources Defense Council (NRDC), whose petition to the FDA for a ban on BPA in all consumer products was rejected last year, says that the partial ban comes too late to offer much in the way of benefit as most baby bottles and spill-proof cups are already BPA free. NRDC senior scientist Sarah Janssen told the press: "This is only a baby step in the fight to eradicate BPA. To truly protect the public, FDA needs to ban BPA from all food packaging. "FDA action on this request now provides certainty that BPA is not used to make the baby bottles and sippy cups on store shelves, either today or in the future. " THE NEW YORK TIMES 17/07/12 F.D.A. Makes It Official: BPA Canâ€™t Be Used in Baby Bottles and Cups. BEFORE IT'S NEWS 01/06/13 FDA opts NOT to ban Bisphenol-A (BPA) in canned foods â€“ 93% of Americans Already Have Bisphenol-A in.

SENATE_GOV - 2013 - A bill to establish requirements with respect to bisphenol A. EPA 11/02/13 Bisphenol A (BPA) Action Plan Summary. What chemical is addressed in the action plan? 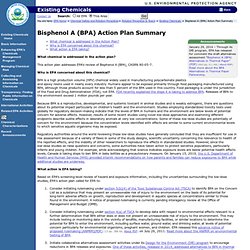 This action plan addresses EPA’s review of Bisphenol A (BPA), CASRN 80-05-7. Why is EPA concerned about this chemical? BPA is a high production volume (HPV) chemical widely used in manufacturing polycarbonate plastics and epoxy resins used in nearly every industry. Humans appear to be exposed primarily through food packaging manufactured using BPA, although those products account for less than 5 percent of the BPA used in this country. Food packaging is under the jurisdiction of the Food and Drug Administration (FDA), not EPA. Because BPA is a reproductive, developmental, and systemic toxicant in animal studies and is weakly estrogenic, there are questions about its potential impact particularly on children’s health and the environment.

What action is EPA taking? Based on EPA’s screening-level review of hazard and exposure information, including the uncertainties surrounding the low-dose studies, EPA's action plan called for EPA to: EPA - Biomonitoring - Bisphenol A (BPA) About the BPA Indicators Indicators B11 and B12 present information about BPA levels measured in children and women. 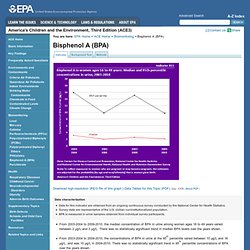 The data are from a national survey that collects urine specimens from a representative sample of the population every two years, and then measures the concentration of various contaminants in urine. DEPARTMENT OF ECOLOGY - STATE OF WASHINGTON 21/02/13 Testing shows most products sold in Washington follow ban, avoid BPA. Department of Ecology News Release - February 21, 2013 OLYMPIA – Washington state’s 2010 ban on the use of the chemical BPA in baby bottles, children’s cups and sports bottles appears to be working. 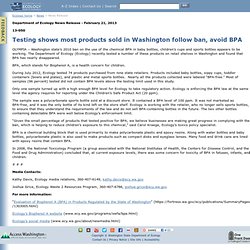 The Department of Ecology (Ecology) recently tested a number of these products on retail shelves in Washington and found that BPA has nearly disappeared. BPA, which stands for Bisphenol A, is a health concern for children. During July 2012, Ecology tested 74 products purchased from nine state retailers. Products included baby bottles, sippy cups, toddler containers (bowls and plates), and plastic and metal sports bottles. MINNESOTA DEPARTMENT OF HEALTH - NOV 2012 - Bisphenol A in Drinking Water.