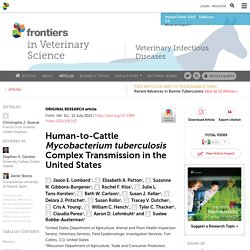 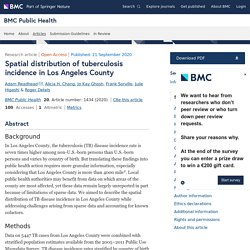 -born persons was 2.3 per 100,000 in contrast to the rate among non-US-born persons which was occurring among 15.8 per 100,000 [3]. The map for crude incidence among all residents shows higher incidence in central areas of the county and lower incidence in outer areas (Fig. 1a). For reference, the California and U.S. CDC - MARS 2020 - US Tuberculosis Rates among Persons Born Outside the United States Compared with Rates in Their Countries of Birth, 2012–2016. Disclaimer: Early release articles are not considered as final versions. 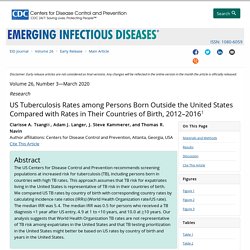 Any changes will be reflected in the online version in the month the article is officially released. Author affiliations: Centers for Disease Control and Prevention, Atlanta, Georgia, USA In the United States, 9,272–9,940 cases of tuberculosis (TB) were reported annually during 2012–2016; incidence rate was 2.9–3.2 cases/100,000 population (1).

Most cases occurred among non–US-born persons and were attributed to progression of remotely acquired latent TB infection (LTBI) rather than recent transmission within the preceding 2 years (2). US law requires non–US-born persons seeking lawful permanent residency in the United States and refugees resettling in the United States to undergo a medical examination, including screening for TB. We analyzed data from the US National TB Surveillance System (NTSS) for TB cases reported during 2012–2016 for persons born outside the United States. Figure 1 Figure 1. Figure 2. CDC EID - MARS 2020 - Public Health Response to Tuberculosis Outbreak among Persons Experiencing Homelessness, Minneapolis, Minnesota, USA, 2017–2018.

Disclaimer: Early release articles are not considered as final versions. 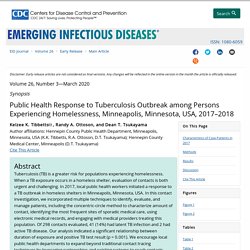 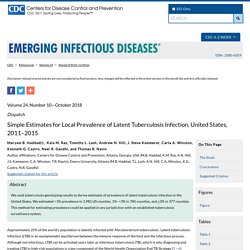 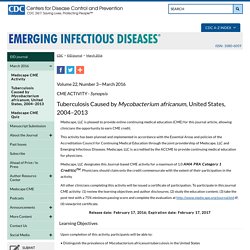 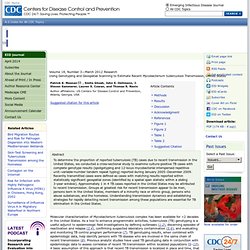 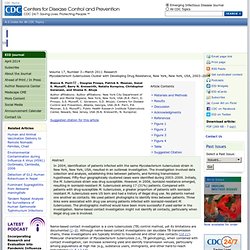 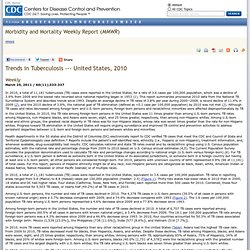 This report summarizes provisional 2010 data from the National TB Surveillance System and describes trends since 1993. Despite an average decline in TB rates of 3.8% per year during 2000--2008, a record decline of 11.4% in 2009 (2), and the 2010 decline of 3.9%, the national goal of TB elimination (defined as <0.1 case per 100,000 population) by 2010 was not met (3). Although TB cases and rates decreased among foreign-born and U.S. -born persons, foreign-born persons and racial/ethnic minorities were affected disproportionately by TB in the United States.

Mortality Among Patients with Tuberculosis and Associations with HIV Status. Please note: An erratum has been published for this article. 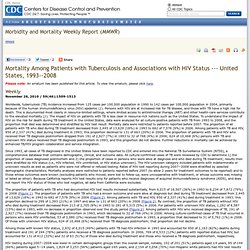 This is documented most clearly in resource-limited settings, where limited access to antiretroviral therapy (ART) and other health-care services contribute to the elevated mortality (1). Since 1993, all cases of TB diagnosed in the United States have been reported to CDC and entered into the National TB Surveillance System (NTSS), a comprehensive database that contains demographic, clinical, and outcome data.